Using the right soil mixture for your Bonsai trees is crucial. Soil is important to supply your trees with nutrients, but it also needs to drain properly, provide enough aeration, and retain water. Most online Bonsai shops offer ready-mixed soils, but preparing a soil mixture yourself saves money, and gives control over the exact mixture for your particular tree species. 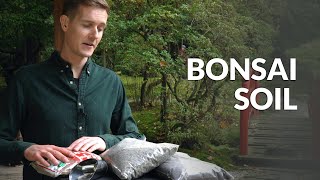 The quality of soil used directly affects the health and vigor of your tree. It’s our experience that unhealthy trees that lack vigor, are very often planted in poor Bonsai soil. Or worse, planted in normal garden soil. These types of soil harden easily when it gets dry, which is very harmful to the growth of Bonsai trees and makes proper Watering very difficult.

The soil requires several qualities for it to be considered a good soil mix for your bonsai:

Good water-retention
The soil needs to be able to soak in and retain sufficient quantities of water to supply moisture to the Bonsai between each watering. However, too much water retention will damage your tree.

Good drainage
Excess water must be able to drain immediately from the pot. Too much water-retention will rot the roots and kill the bonsai tree. Soils that don’t drain well enough also lack aeration and are prone to a buildup of salts.

Good aeration
The particles used in a Bonsai mix should be big enough to allow tiny gaps, or air pockets, between each particle. Other than providing oxygen for the roots, these air pockets also allow for good bacteria and mycorrhizae. This allows the processing of food to happen before being absorbed by the tree’s root-hairs and sent to the leaves for photosynthesis.

Soil mixes are described as being either organic or inorganic. Dead plant matters such as peat, leaf-litter, or bark are described as being organic soil components. The potential problem with organic soil components is that organic matter breaks down and reduces drainage over time. Some organic components deteriorate at varying speeds, so it’s hard to say how quickly organic soil becomes harmful. If you’re adamant about using an organic soil mix, we recommend choosing a mixture that uses pine bark. Most potting composts absorb water very poorly once they are completely dry. This is one of the biggest problems for cheap indoor Bonsai trees purchased at garden centers. You’d think you watered the tree but the water runs past the soil into the bottom of the pot!

Inorganic soil components contain little to no organic matter such as volcanic lava, calcite, and baked/fired clays. They absorb fewer nutrients and water than organic soils but are great for drainage and aeration. The limited absorption capacity also gives us more control over the amount of fertilizer in the soil.

A particle-based, well-structured, inorganic soil allows water to drain quickly and fresh air to continually enter the soil. A compacted organic soil that lacks structure also lacks aeration and drainage which deteriorates the overall health of your tree, and without swift action, will eventually cause root rot and kill your bonsai.

Akadama is hard-baked Japanese clay specifically produced for Bonsai purposes and available on all online Bonsai shops. If you purchase Akadama, keep in mind that It needs to be sifted before use, and after about two years it does start to break down which reduces aeration. This means that regular repotting is required, or that Akadama should be used in a mix with well-draining soil components. Akadama is rather expensive and is therefore sometimes substituted with similar fired/baked clays that are easily available at any garden center. Even cat-litter can be used as a substitute, check our Bonsai forum to see which brands are available in your country.

Pumice is a soft volcanic rock, which can absorb water and nutrients quite well. When used in a Bonsai soil mix it helps to retain water and allows the roots to ramify very well.

Organic potting compost is made up of peat moss, perlite, and sand. On its own, it retains too much water and doesn't allow for proper aeration and drainage, but as part of a soil mixture, it can work very well.

Fine gravel / grit helps to create a well-draining and aerated Bonsai soil. It is also used as a bottom layer in Bonsai pots to enhance drainage. Most experts have stopped using it, as they tend to stick with a mixture of Akadama, Pumice, and Lava rock.

Different tree-species demand different soil-mixtures, so make sure to check our Tree species guide to find the optimum mixture for your specific trees. However, we can describe two main mixtures we use for either deciduous or coniferous trees. Both mixtures consist of Akadama for water retention, Pumice for good substrate structure, and Lava rock for aeration and drainage.

Note that both mixtures can, and should, be adapted to your circumstances and/or location. If you know you won’t have enough time to check on your trees twice a day, then add more Akadama or organic potting compost to your mix for increased water retention. If you live somewhere with a wet climate, add more lava rock or grit to enhance the draining qualities of your mixture.

With soil, it seems every expert recommends a different mix. Try and experiment with what works for you!