The Ficus genus belongs to the family of mulberry plants or Moraceae, and it’s the most popular indoor tree species for Bonsai beginners. They can be found on every continent in the tropic regions and are very suitable for indoor Bonsai. 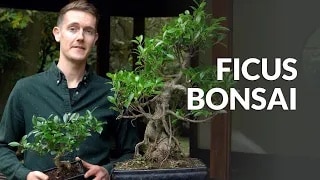 The ficus is an indoor tree that does not endure frosty conditions. It can be kept outside in the summer as long as temperatures are above 60°F (15°C). It requires a lot of light, preferably full sunlight, so be sure not to place it in a shady location. The temperature should be kept relatively constant. Figs can endure low humidity due to their thick, waxy leaves, but they prefer higher humidity and need extremely high humidity to develop aerial roots.

Ignore labels stating your Ficus needs watering every day, you need to water on observation. The Ficus should be watered generously whenever the soil gets slightly dry. The Bonsai Ficus prefers room temperature soft water and it can tolerate occasional over, or underwatering. We advise daily misting to maintain humidity, but too much misting can create fungal problems. The warmer the placement of the fig during winter, the more water it needs. If it’s kept in a cooler place it only needs to be kept slightly moist. Continue reading about watering Bonsai trees.

Fertilize every two weeks during summer, and every four weeks during winter if the growth doesn't stop. Liquid fertilizer can be used as well as organic fertilizer pellets.

Regular pruning is necessary to retain the tree’s shape. Prune back to 2 leaves after 6-8 leaves have grown. Leaf pruning (defoliation) can be used to reduce leaf size, as some Ficus Bonsai species normally grow large leaves. If a considerable thickening of the trunk is desired, the Ficus can be left to grow freely for one or two years. The strong cuts that are necessary afterward don't affect the Ficus' health and new shoots will grow from old wood. Larger wounds should be covered with cut paste. Continue reading about pruning Bonsai trees.

Wiring and bending thin to medium Ficus branches is easy due to their flexibility, but you should check the wires regularly as they can cut into the bark very quickly. Strong branches should be shaped with guy-wires because they can be left on the tree for a much longer period.

Cuttings can be planted at any time of the year, but they have the highest success rate during mid-summer growth. Air-layering will work best during spring, in April through May. In most cases, springtime is the best time for planting Ficus seeds.

Ficus trees can fuse by placing branches, roots, or trunks together and applying some pressure. This technique is known as approach-grafting and it can be used to form appealing structures. You can tie many young plants together to fuse them and build a single strong trunk. Fig tree branches and roots can also be grafted quite easily. If the growing conditions are ideal, you can even take aerial roots from one part of the tree and graft them into a different position. For faster healing, or closing of large wounds, young plants, shoots, or aerial roots can be grafted across wounds. An experienced grower can work on fig trees with a nearly unlimited range of creative freedom, which considerably increases the appeal of growing Ficus retusa as a Bonsai plant.

Acquisition of ficus ginseng Bonsai: Ficus plants are available as cheap Bonsai or pot plants in nearly every home-improvement store or nursery. Mass-produced cheap Bonsai usually come with a lot of problems, like ugly scars from rusty wire that dug into the bark, unattractive shapes, often poorly grafted branches in odd positions, bad soil, and sometimes inappropriate pots without drainage holes. When you buy from specialized Bonsai traders you’ll most often find high-quality Bonsai that have been well cared for. They offer everything from young plants, pre-Bonsai, and pre-styled Ficus trees up to high-value Bonsai trees.

Fig species are quite resistant against pests, but they are still susceptible to several issues depending on their location, and time of year, especially in the winter. Dry air and a lack of light weakens the Bonsai Ficus and often result in leaf drop. In poor conditions like these, they are sometimes infested with scale or spider mites. Placing customary insecticide sticks into the soil or spraying insecticide/miticide will get rid of the pests, but a weakened Ficus tree’s living conditions must be improved. Using plant lamps 12 to 14 hours a day, and frequently misting the leaves will help in the recovery process. For more detailed information on these techniques, check out our Bonsai tree care section. 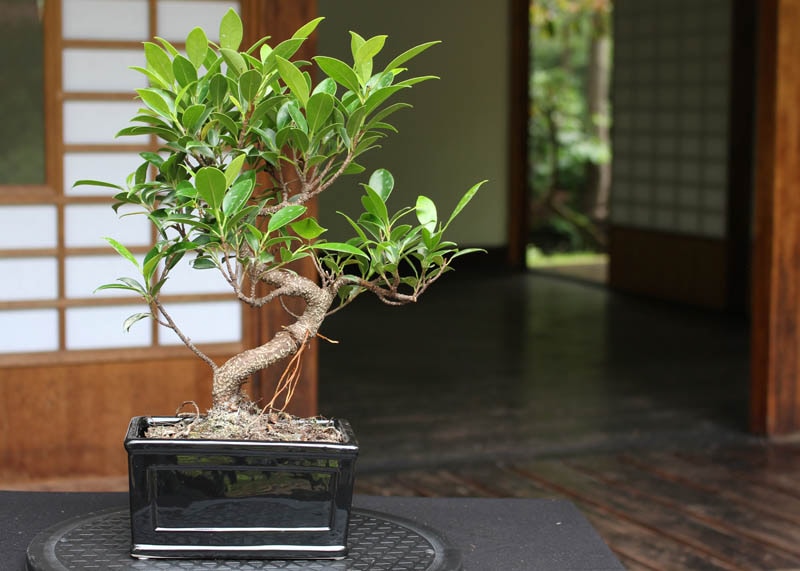 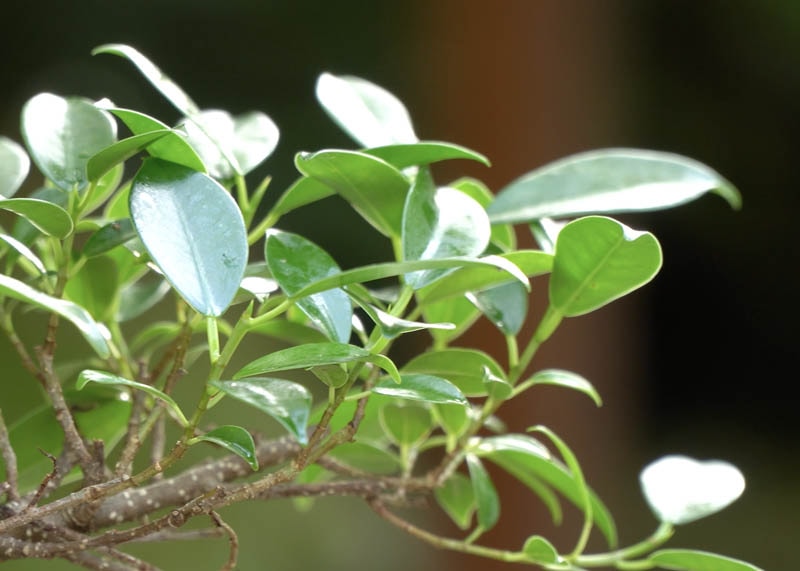 Leaves of the Ficus 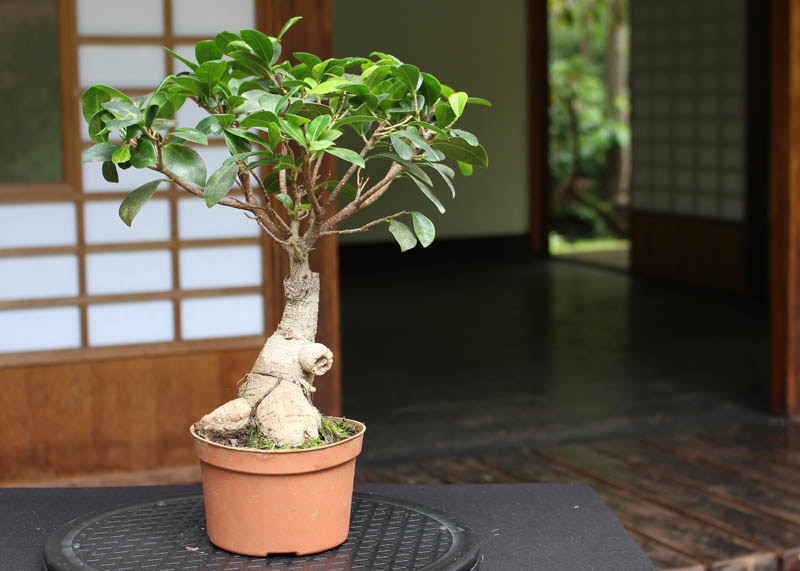 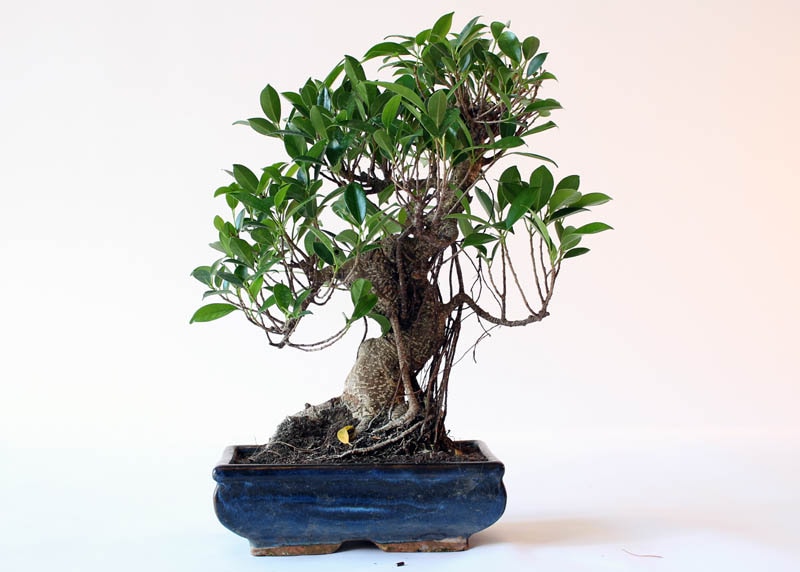 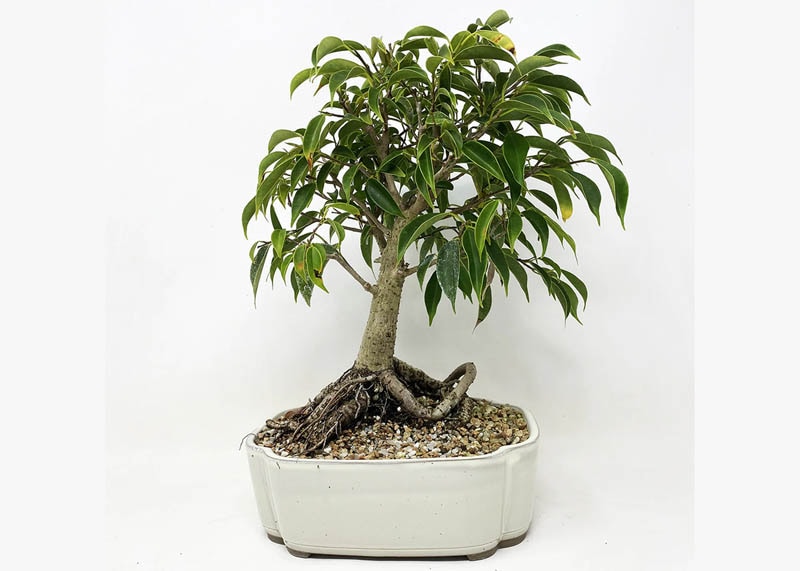 Depending on where you look, there is different information as to the exact number of existing Ficus tree species. We know that there may be between 800 and 2000 different species. The most popular one for Bonsai is the Ficus Retusa. It’s often shaped with an s-curved trunk and has dark green oval leaves. Similar Ficus varieties include; The Microcarpa, Tigerbark, Willow leaf, Golden Gate, Religiosa, Benjamina, and Taiwan. The Ficus Ginseng is another popular tree with a thick, pot-bellied trunk, similar to the Ginseng root. Sometimes it is grafted with Ficus microcarpa leaves (combining it to a Ficus microcarpa ginseng). If you need help identifying your tree, take a look at our Bonsai tree identification guide.

Some figs trees can grow very large with a crown circumference of more than 1000 ft (300 m). All fig Bonsai species share a milky latex sap which leaks from wounds or cuts. The tropical figs are evergreen trees, small shrubs, or even climbing plants. Some of them can produce nice flowers, while most Ficus species have hidden flowers in small receptacles from which their fruits grow. Only specialized pollinating fig wasps can pollinate those hidden flowers. The fruit can be yellow, green, red, or purple-blue and are between a few millimeters to several centimeters, as the edible fruit of Ficus carica.

Most Ficus Bonsai trees can produce aerial roots in their natural habitat, also called 'banyan tree', which are often presented in appealing Bonsai creations with many aerial root pillars or root over rock styles. In this article, we show the progression of several figs including with aerial roots: Styling a Ficus. To enable aerial root growth in our homes a humidity of nearly 100% must be achieved artificially. You can use a glass cover, a fish tank, or a construction with transparent sheets for this purpose. Aerial roots grow down vertically from the branches and develop into strong pillar-like trunks when they reach the soil. In tropical climates, a single tree can become a forest-like structure and cover an enormous expanse.

The leaves of most Bonsai Ficus species have special pointed tips from which the rainwater drips off. The leaves can vary in sizes of between 1–20" (2-50cm). In most cases, fig-trees have smooth gray bark on their trunk, but there are a few species or varieties with special bark patterns, like the Ficus microcarpa Tigerbark. To see images of the many varieties of Ficus, check this article: Top 10: Ficus Bonsai trees. Something to be aware of is that Ficus Ginseng Bonsai plants are poisonous for animals, especially if they eat the leaves. If you have pets, make sure to place your Ficus out of their reach.

Get the free Ficus guide 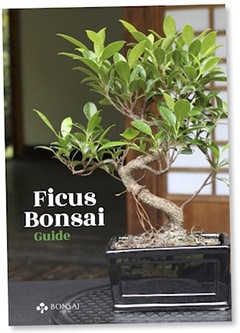 Get the free Ficus guide