The word “Bon-sai” (often misspelled as bonzai or banzai) is a Japanese term which, literally translated, means “planted in a container”. This art form is derived from an ancient Chinese horticultural practice, part of which was then redeveloped under the influence of Japanese Zen Buddhism.

It has been around for well over a thousand years. The ultimate goal of growing a Bonsai is to create a miniaturized but realistic representation of nature in the form of a tree. Bonsai are not genetically dwarfed plants, in fact, any tree species can be used to grow one.

What is a Bonsai tree exactly?

Techniques such as pinching buds, pruning and wiring branches, and carefully restricting but not abandoning fertilizers are used to limit and redirect healthy growth. Most commonly kept under four feet (or about a meter) in height, Bonsai are not genetically dwarfed plants. However, plants with smaller leaves do make these compositions easier to design. In fact, any plant species that has a woody stem or trunk, grows true branches, can be successfully grown in a container to restrict its roots/food storage capability, and has smaller or reducible-leaves can be used to create a Bonsai.

Look around at your trees, bushes, hedges, the copses in your yard or park, plants in the nursery or wild landscape – essentially any of those can be starter material. Carefully collected during the appropriate growing or dormant season with proper permission, your composition is begun. Most native plants can be grown outdoors; material from more tropical climates needs at least some protection from the elements in the temperate zones. In our Bonsai tree species guide you can find more information about specific care per species. Or use this guide to identify your Bonsai tree species in two steps.

The ultimate goal of Bonsai is to create a realistic depiction of nature. As a Bonsai gets smaller (even down to a few inches/centimeters) it increasingly becomes abstract, as opposed to resembling nature in a more precise way. Several classifications of Bonsai have been put forward, and although the exact size classifications are disputed, they help to gain understanding of the aesthetic and botanical aspects of Bonsai. The classifications are originally based on the number of men needed to lift the actual tree.

Read more about the smallest trees in the Shohin and Mame Bonsai article. 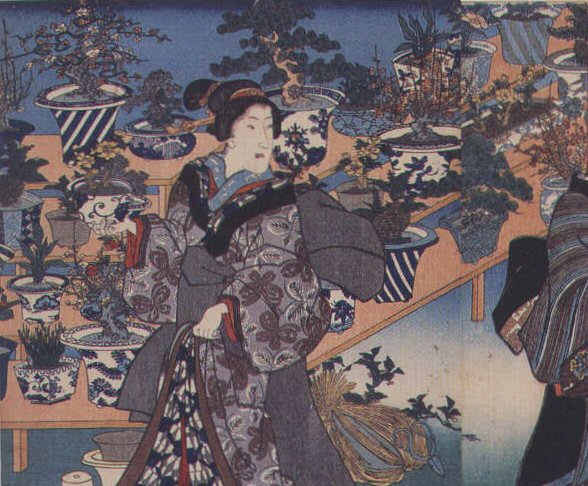 Bonsai for sale in a market, Japan.

The Chinese characters for their older dwarf potted tree landscapes were adopted to name the Japanese art-form. Bonsai in Japanese is written as: 盆栽. In short, the definition of Bonsai can be explained as:

“Bon” [left character] is a dish or thin bowl (“a modified vessel which has been divided or cut down from a deeper form”).

“Sai” [right character] is a tree or other growing plant which is planted – “planted,” as would be a halberd or spear or pike stuck into the ground.

“Bonsai” thus means or denotes “a tree which is planted in a shallow container".

We now know the literal translation of Bonsai is "tree in pot", but what is the meaning of a Bonsai tree? A Bonsai tree is a replication of nature, in the form of a miniature tree, without displaying the human intervention too clearly.

The connotations or added/implied Bonsai tree meanings include:
A general tree-like shape or style (although not necessarily natural to that type of plant growing full-size in the wild).
A profile that is not as detailed as a photographically-real tree but has just enough features to easily suggest a full-grown tree.
Relative smallness, compared with those same types of trees outside of the container, for ease of transport and ability to keep nearby.
A sense of naturalness which has been subtly accentuated by human intervention but which is not spoiled by stark evidence of human interaction.
A particular representation of something much more than itself, and thus allowing each viewer to interpret what is shown and to build-upon this based on his or her own experiences and memories.
Something so valued that it has received care for virtually every day of its [hopefully long] containerized life.
Something held in such high regard that it was allowed to be brought temporarily into the house for honored guests even though it contained soil from the garden.
A portable oasis and transportable miniature garden which can represent the seasons and vast or favorite landscapes close-at-hand for meditation or contemplation assistance.
These are just a few points, it is up to you to decide what Bonsai means to you.

Read more about the history and origins of Bonsai.

Bonsai-in-training (also known as “potensai,” potential Bonsai) should point to a future, more mature creation which the artist, at least, has somewhat in mind. And because these are made with living, growing things, those future piece are never complete or finished. They will be presented within certain biological parameters, subject to health issues or remodeling by the tree with the caretakers' assistance. The oldest and longest-containerized Bonsai because of natural changes can undergo several different styles throughout their long lives. These trees can, in fact, live longer than their full-size counterparts because of our increased attention to their health, water and nutritional needs, protection from weather extremes, injuries needing care, or pest infestations requiring containment or removal. In our Top 10: Greatest Bonsai trees we have included an 800 year-old tree. The best Bonsai – whether a single tree or a multi-plant and rock landscape composition – touch us, make us take notice, stop us as they catch our experience and imaginations to show us something new.

Thick trunks, textured bark, an interplay of twisting live wood and deadwood, surface roots, branch and twig ramification, foliage pads, relatively small leaves or needles, a very complementary and relatively shallow container, tiny fruit or cones or flowers – these are just a few of the more obvious features that can be used to help portray a miniature landscape. They are not all needed or possible in any one given composition, and they cannot simply be included “just because.” A true master artisan knows, feels what is needed. And his or her creation touches us, also. Those true masterpieces are the ones which, when you first look at them, can momentarily take your breath away and raise a smile. The earliest Bonsai were collected in the wild and were interestingly-shaped specimens which told of many adventures or challenges during their long-lives growing exposed to the elements. As their availability decreased during the centuries, landscape and nursery plants were tried and experimented with. Eventually, it was learned how to shape the trees to resemble naturally-sculpted specimens.

Bonsai are a blend of horticultural knowledge and art. As one's experience with a given type of tree increases, concern about keeping the plant alive and healthy can take a backseat to concern about a particular design. The best, ideal, masterpiece compositions seem natural, without artifice or affectation. They don't call attention directly to the artist; they don't deliberately show off their features (or flaws). Read more about compositions at the Bonsai styles article.

As with all human crafts/hobbies/arts, Bonsai can be enjoyed by oneself or shared with others. They can be made for personal enjoyment or profit from sale. They can be designed quickly with little experience or developed over a period of time with increasing personal expertise and exposure to the creations of other enthusiasts and artists. And any combination of these characteristics.

Bonsai can challenge one's own gardening skills, artistic aesthetics and design capabilities, time and monetary investment, and storage and display parameters. Bonsai truly are/can be much more than just “miniature Japanese trees.” They can be as inexpensive as a collected “volunteer” sapling in one's own yard put in a plastic pot to a pricey award-winning specimen imported from overseas with an antique container. The range of this hobby/art is one of the appealing features of Bonsai. Click here for an introduction on how to grow a Bonsai yourself.

The containers for these trees can be an interest in themselves. Traditionally made in China and then Japan, these shallow containers of mostly fired earthenware are increasingly crafted by both professional and amateur artisans around the world. The matching up of a pot to a designed tree can be a wonderful challenge, for the pot must support the tree as well as be an attractive but non-intrusive frame to the Bonsai's picture. Earth tones and not-so-garish decorations distinguish traditional Japanese pots from the Chinese models. And containers for cascading trees are the one exception to the shallow pot rule: these tall, narrow containers must provide adequate space for roots and a balanced center of gravity for trees designed to appear to be hanging down from the side of a mountain or cliff. More info about Bonsai pot selection here. 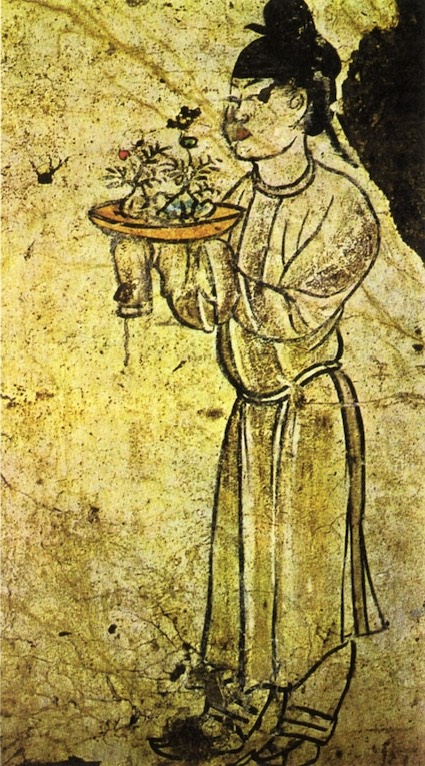 While “Bonsai“ specifically refers to dwarf potted trees based on the Japanese model, it is also used as a generic term for related art-forms in other countries, which include but are not limited to the following:
Penjing are the older and original form of Chinese miniature landscapes. They usually include rocks to represent mountains, hills, and cliffs. Sometimes they are even all the way up to 3 meters or 10' tall. These larger compositions are planted in non-movable concrete containers on permanent display.
Saikei are the newer and smaller Japanese versions of Penjing. These are made with rocks, small plants/ground-covers, and underdeveloped trees (which could someday become independently potted Bonsai).
Hòn non bô are Vietnamese miniature landscapes from 0.3 to 7.6 m (1' to 25') high, made with rocks, plants and water imitating island scenery, mountains and surroundings.
Mai-dăt are the Thai compositions which are more angular and symbolic, somewhat likened to stylized dancers' poses.

Some distinct shapes are also seen in Bonsai created to reflect native trees in North America, South Africa, and Australia, for instance.

Then there are other key display options. Accent and companion plants are smaller, separately-potted compositions which are placed near to the main Bonsai so as to provide scale or seasonal theme to the principle tree.

The most formal display setting is a Tokonoma displays, an elevated alcove whose rear wall usually holds a hanging scroll. The combination of the scroll, Bonsai, and accent plant or viewing stone are designed to present a specific theme.

Viewing stones or Suiseki are relatively small natural rocks which resemble miniature mountains, cliffs, islands, huts, animals, or other shapes. The best of these have custom-carved bases for better display.

This is a current interpretation of this gardening interest. As enthusiasm and experience with this further spreads around the world, additional meanings, appreciations and materials will be added to the overall body that comprises Bonsai. More of the local woody plants and new native styles continue to be applied to the designs of Bonsai. It is constantly developing and each of us contributes to what is this dynamic art-form. Author: Robert J. Baran (Bonsai researcher and historian).