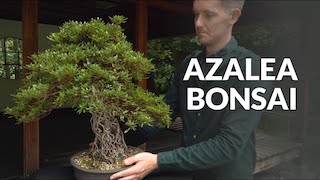 Azalea Bonsai trees must not dry out but they also don't like permanent wetness. Because of this it is necessary to check the moisture of the soil very carefully. A root ball that has gotten too dry temporarily should be dunked in a bowl of water to get thoroughly moistened again. Azaleas need a slightly acid soil and hard tap water is not appropriate for them. You can use rainwater, mix rainwater with tap water or filter your tap water for the azalea Bonsai. Continue reading about watering Bonsai trees.

During the growing season azalea Bonsai should be fed with a special azalea or rhododendron fertilizer. There are liquid azalea fertilizers which are used weekly and organic products to strew on the soil surface in longer intervals. While the trees flower quit feeding or use only half the normal dosage.

The azalea is one of the very few tree-species that are basally-dominant. This means that the lower branches grow stronger than the weaker top, which leads to the shape of a shrub in nature. Therefore prune the branches at the base harder than the top. The Azalea withstands strong pruning very well and even produces new shoots from branches on which no leaves are left. Immediately after flowering the wilted flowers and ovaries are cut off or pinched by hand. This point of time is also favorable for all other pruning and trimming works because in summer the new flower buds for the next year will develop. If you prune your tree too late there will be no or nearly no flowers in the following year. Unwanted shoots from the trunk or the base of the branches can be removed at any time of the year. Extensive styling works on raw material are often done in spring and in that case flowering is omitted consciously. The wood of the azalea is brittle so that wiring and bending should be done with great care. Continue reading about pruning Bonsai trees.

Every two years, either in spring or after flowering, the azalea should be repotted. Prune the roots with great care because they are very thin and matted and can easily be torn when you try to disentangle them. It is important to use a special soil for azaleas which is lime-free. Pure Kanuma for example is a good azalea soil. Continue reading about repotting Bonsai trees.

Azaleas are propagated from cuttings in spring and summer. Depending on the cultivar the success rate can differ, but many customary cultivars produce roots easily and quickly. In the hot time of the year transparent sheets can be useful to protect the young cuttings from excessive evaporation.

Azaleas are not often infested by pests. But low humidity can support spider mites which should be treated with a suitable pesticide and improved humidity. Vine weevil can eat the leaves and their grubs cause great damage on the roots. With special pesticides or nematodes the beetles and their grubs can be eliminated. Root rot, caused by a fungus, can occur when the soil of the azalea is too wet and compacted. There are appropriate fungicides to pour into the soil that are effective against root rot. Another fungal disease causes leaf galls. In spring and summer leaves and possibly stems become thickened, curled, fleshy and turn pale green. In the later stages of the disease, the galls become covered with a white powdery substance and finally they turn brown and hard. Leaf galls are also stimulated by wetness and they appear most often on cultivars with plain-colored red and purple flowers. The best way to handle this disease is to remove the galls as soon as they are discovered and protect the azalea from too much rain. For more detailed information on these techniques, check out our Bonsai tree care section. 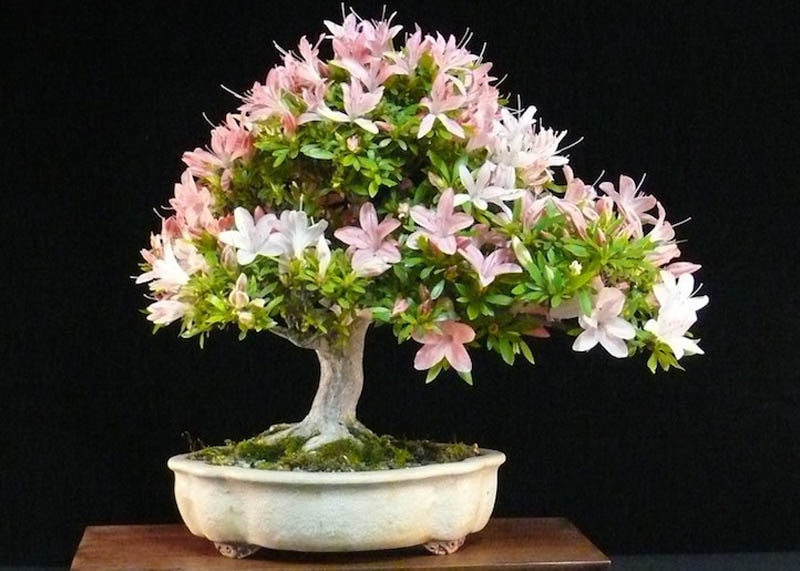 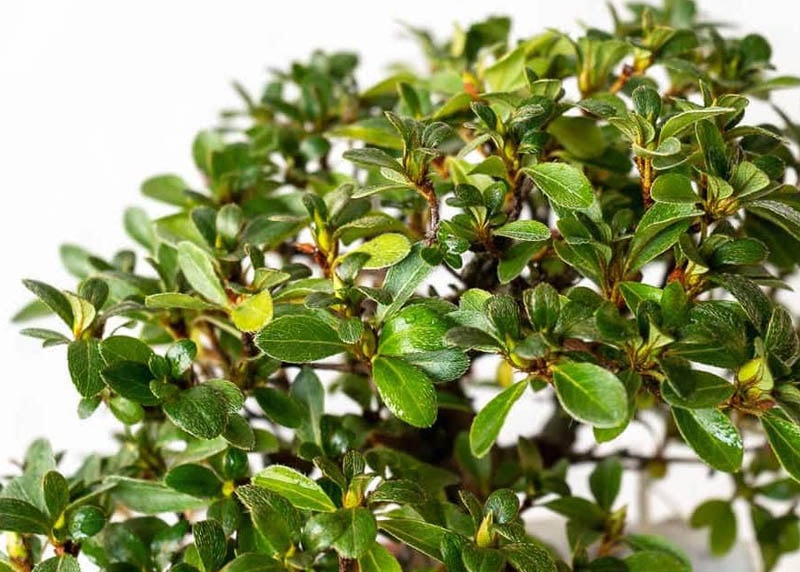 Leaves of the Azalea 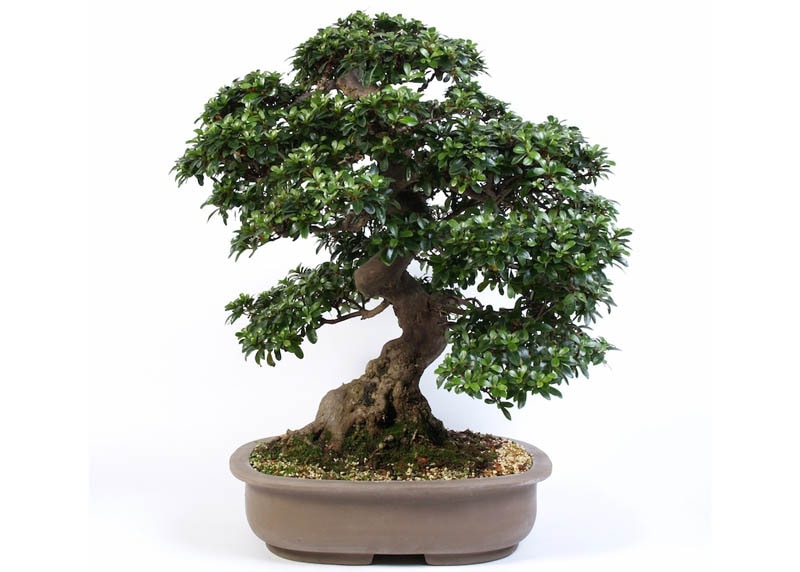 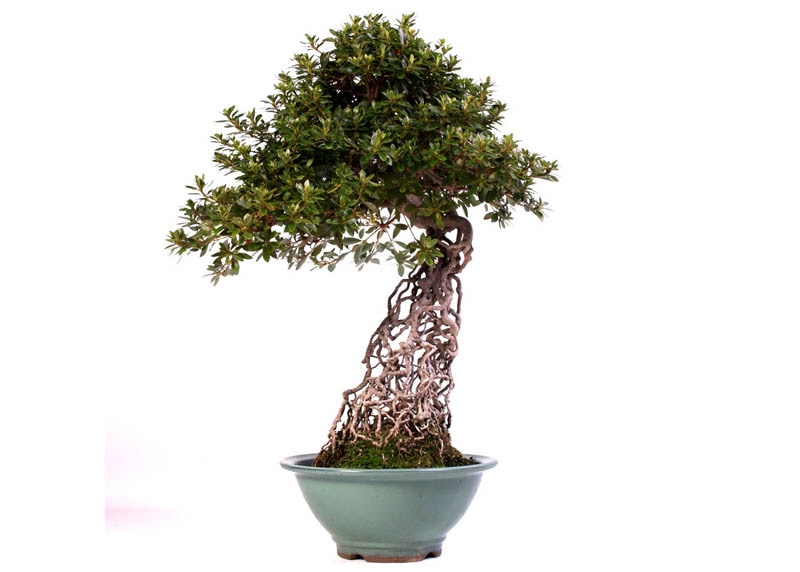 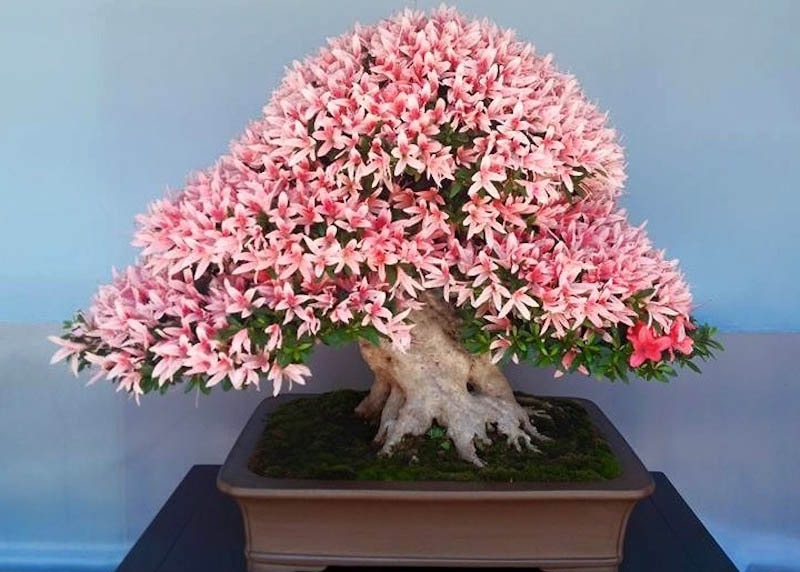 The Azalea is popular and well-known for its spectacular flowers, which open in late Spring and come in many different colors, shapes, sizes and patterns. In Japan special Azalea Bonsai festivals are organized around the time the trees flower. For an Azalea to flower abundantly you need to time your pruning and fertilizing well.

The leaves of the Azalea bonsai are dark green and differ in size and shape, depending on the cultivar. Satsuki and Kurume azaleas are evergreen, small shrubs which are very suitable for Bonsai purposes, and should be kept outdoors.

The Azalea grows fine branches that result in a beautiful ramified branch structure. The branches of an Azalea can be brittle especially when the tree grows older, so be careful when wiring your tree. If you need help identifying your tree, take a look at our Bonsai tree identification guide.