Every Bonsai enthusiast knows the problem that there are times when he can't be at home and therefore can't water his Bonsai trees himself. During the summer heat even long work days can be critical when the trees need to be watered frequently.

Now and then we want to travel for a weekend or longer and then we must make arrangements to insure proper care for our Bonsai trees. Family members or neighbors are in most cases unable to cope with the trees' needs and often there is a bitter loss in the end. The technique of Watering a Bonsai really isn't that simple.

For a short absence and a small Bonsai collection there are tricks and simple means which can help in case of need. For example, Bonsai trees can be placed in a plastic vat which is filled with a few centimeters of water and placed in the shade. Or each Bonsai tree is placed on bricks in a bowl filled with water which must not reach the pot. Cloth strips are then placed on the soil surface so that they reach into the water and soak it up to the soil. Another possibility is a simple lawn sprinkler which is activated by a timer clock and waters the Bonsai trees placed in its reach.

A real watering system however can be the best permanent solution and is especially convenient for longer absences. It is important that the system must be thoroughly tested before it is left to work for a longer time during the absence of the owner, in order to make sure that every tree is provided with enough water. It is also a good idea to have somebody to come and check the system and see if all the components are still in place. If for example trees are tilted by the wind the water tubes and drip heads of the trees beside it can be dislocated and will also fail to water properly. Trees that are prone to be overturned by the wind should be tied to the shelves to avoid this.

A simple watering system that works without electricity and can be used either with a water tank or tap is the Blumat system. Its porous clay cones, either long ones for deep pots or short ones for shallow Bonsai containers, are pushed into the soil and provide water which comes through thin water tubes. This system keeps humous soil constantly very moist and might not perfectly moisten coarse-grained soil everywhere in the pot. When the water tank and the clay cones are drained the cones must be taken out of the pots, watered and deaerated before they will work again.

A more complex system which can water a larger Bonsai collection flexibly and accurately is the Microdrip System by Gardena. There is a huge number of different components for this system which makes it difficult in the beginning to find out what you really need.

When the Bonsai trees are taken to their winter quarters in autumn, the supply pipes with the drip heads are removed and along with the water computer, master unit and rain sensor they are stored in a dry and frost-free place until next spring. Reinstallation each year in spring is unfortunately quite laborious for a larger Bonsai collection.

This watering system, including all drip heads for about 100 trees, cost about $800. Below, there is an installation example explained and illustrated. 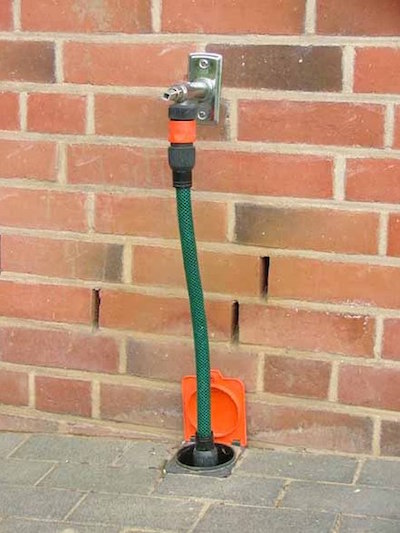 Here comes the water tap out of the wall and the water flows through the hose into the subsurface Gardena pipeline system. This is not essential but practical and elegant. Water can also be provided from a rainwater tank with a pump. 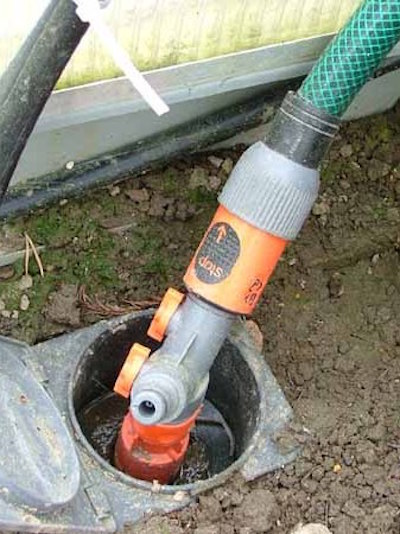 At this point in the greenhouse the water pipe comes out of the ground again. Here a y-branch was installed for an additional hose. The green hose is connected to the upper access of the water computer. 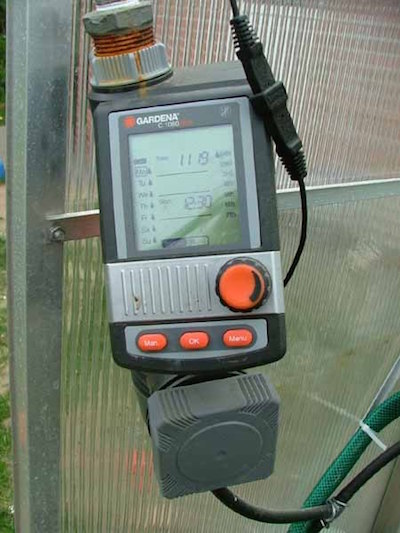 This is the water computer, powered by a 9 V monobloc battery which lasts for about one year. Below you see the MDS master unit with a pressure reducer and a filter which must be cleaned from time to time. The black plastic pipe which comes out at the bottom is the so-called connecting pipe. The computer is not the latest model anymore as it has been in use for some years now, but it works very well. It is one of the more expensive computers which allow to set several different watering intervals at freely chosen times of the day. Cheaper computers can only water every x hours. The advanced models can support a rain sensor which causes the system to suspend watering during rainy weather. This works very well in practice! 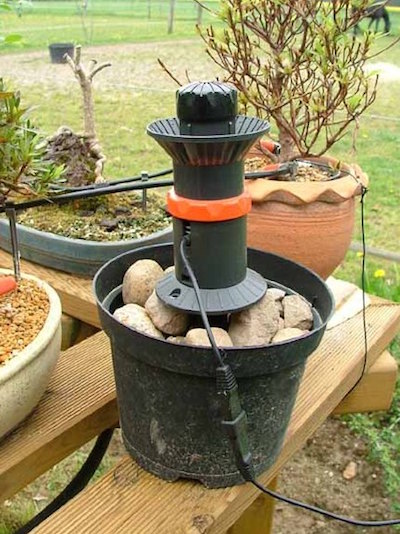 The rain sensor. It is also powered by a 9 V monobloc battery. In the example shown here, a connecting pipe runs around the inside of the greenhouse and the thinner supply pipes branch off to water young plants, weak Bonsai trees and vegetable plants. A problem in this case can be that due to the rain sensor the plants in the greenhouse are also not watered during rainy weather. Fortunately this has never caused a real problem in practice. 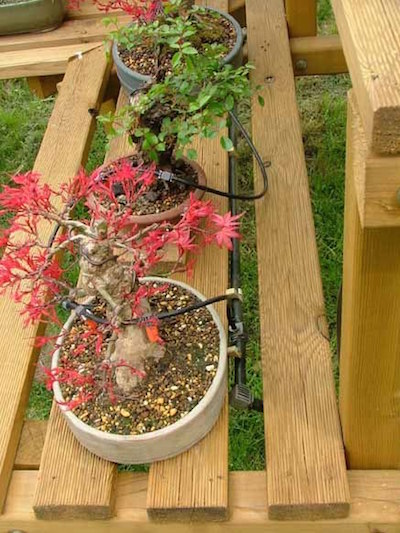 The connecting pipe crosses below the greenhouse wall, runs up along a shelf post and is fastened between the shelf planks. The supply pipes are attached to T-joints which are inserted between segments of the connecting pipe. Adjustable inline and endline drip heads work very well but you have to try out how many drip heads per pot you really need which depends, among other factors, on the drainage qualities of your soil. 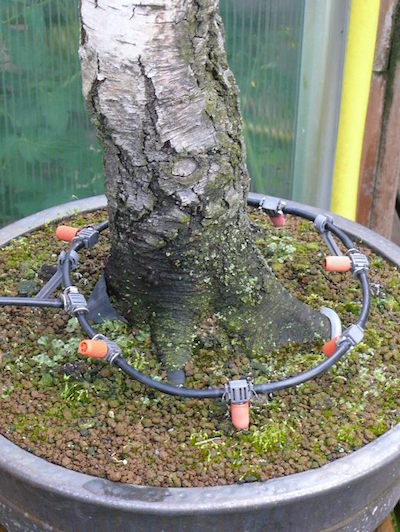 Pipe pegs made of grey plastic are pushed into the soil and keep the drip heads in place. Turning the orange cap of the drip heads increases or decreases the flow rate. Attachment is very simple: just cut through the supply pipe in the desired position and insert the T-joint or drip head into the pipe end, push and twist a bit, then it is safely in place and the metal clip or the little screw thread on the endline drip head secures the pipe.

Depending on the shape of the tree and pot the drip heads can be arranged in different ways. For this tree inline drip heads were combined in a ring pattern. 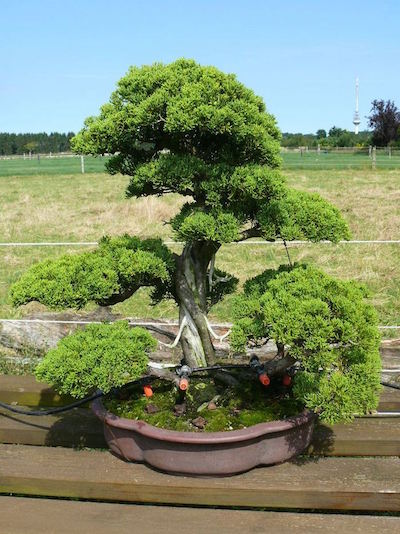 Here inline as well as endline drip heads are in use. 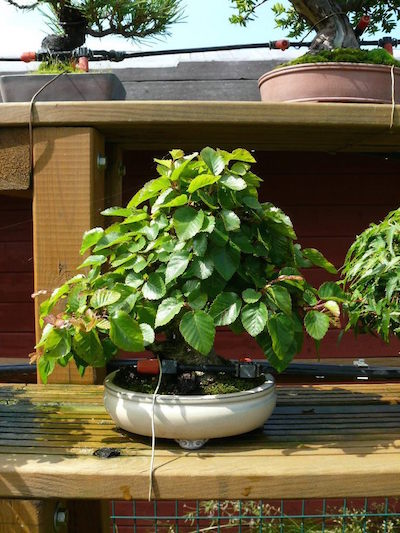 For such a small tree two drip heads suffice.

A different approach shows the following watering system with the water computer made by Hunter and all components provided by the German "Beregnungsparadies" company.

The requirements were that the owner wouldn't have to adjust hundreds of drip heads and that uninstalling the components in autumn and reinstalling them in spring shouldn't take much time. The aesthetic impression also played a role.

Water can come from the tap, water supply well or rainwater tank. The water is led from the house waterworks to the valve box. It contains four valves (more are possible). The valves are opened by the computer for a certain time defined by the owner and then closed again. The water flows through pipes to the sprinklers. Weights are attached to the sprinklers (so that they don't wobble or trundle) which either hang or are mounted on steel posts. They have a range of up to 3.5 m and water in a circle pattern. The circles must overlap in order to make sure an area is perfectly watered. In places that can't be reached drip heads which are known from other systems have to be used.

A sensor can help to include weather parameters. The four different pipes of the system can be operated differently. If a larger number of sprinklers are used and watering is activated several times a day it can easily be hundreds of liters that are poured out each day which might also drench the garden paths and house walls.

As this system uses connection pipes with an oval profile it is recommended to lay them in the ground in larger empty tubes to make sure the pipes won't be compressed or folded. Before the winter the sprinklers are taken off and a compressor blows the remaining water out of the pipes in 5 minutes. Then the system is frost-proof. The computer is left in place and stays turned on because the warmth of its construction components keeps off humidity and prevents damages by condensation water. If you don't mind additional costs and want even more independence and safety you can combine similar systems with a video control and a smartphone app so that watering can be controlled and influenced from afar.

The complete setup of this watering system, including all the pipes and sprinklers cost about $1200. 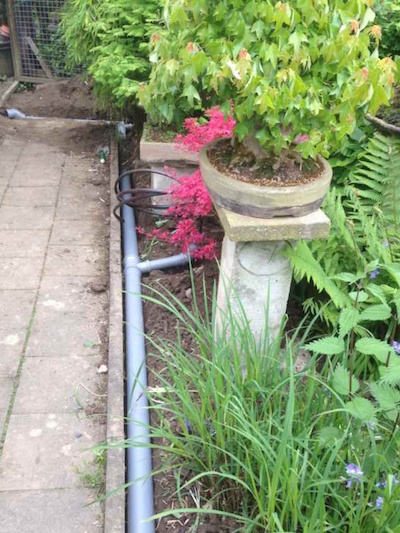 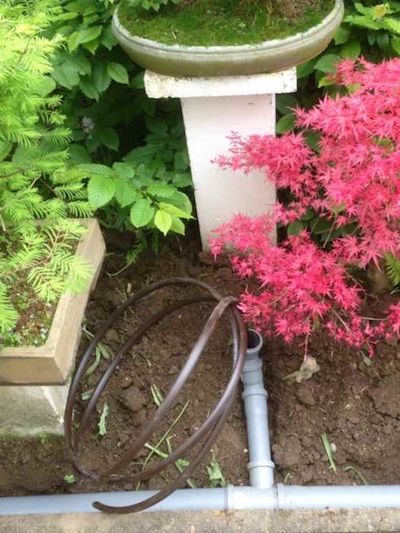 These are the empty tubes in which the pipes are placed without folding and compressing. 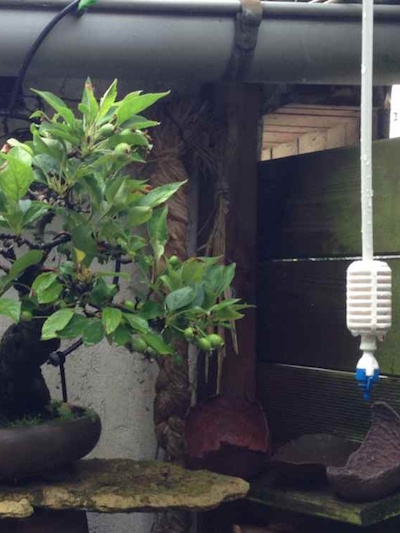 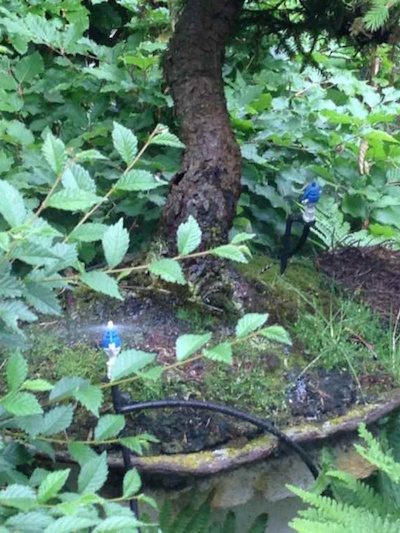