How to collect or grow moss for Bonsai trees

Besides a pot, there are several attributes that are important to enhance the visual display of a Bonsai tree. Covering the surface of the soil with moss is one of these, a practice very common especially when displaying Bonsai trees at exhibitions.

Apart from the esthetic aspect, a very practical aspect is that it protects the soil from dehydration and from birds trying to dig through the soil looking for insects. The Japanese have used moss in their famous Japanese gardens for centuries and have even specialized in “moss gardens”. So the question that arises is; how do I get my soil surface covered with beautiful moss, ferns and lichen? There are two techniques, which will be discussed accordingly.

The first technique, obviously, is to collect moss and ferns and transplant these directly to your Bonsai tree. Moss can be found at various places, but some places are more likely to provide you with the right kind; moss that only covers the surface and doesn’t grow aggressively. After all, you do not want your Bonsai tree to compete with rapid growing mosses.

So, where to find the right kind of moss for your Bonsai tree? Try to collect moss from a place that is similar to where you’ll transplant it to, often this means a sunny place. Try rooftops, cracks between the sidewalk, moss growing on the bark of trees, etc. You can even try to find different types of moss to create an appealing display.

Collect the moss by using a putty-knife and try to collect relatively large patches. Keep the moss moist and try to transplant it without too much delay on your bonsai’s soil surface. The soil surface should consist of a thin layer of nutrient-rich and water-retaining soil (for example potting soil).

Instead of collecting moss and transplanting it to your Bonsai tree, we can also cultivate it ourselves. The main advantage is that this way we can easily combine different types of moss, to create a diverse and more appealing result.

Similar to what is explained above, we collect the moss from sunny places. Try to collect different species. Next, let the moss dry out in the sun so we can easily crumble/mince it to very fine ‘dusty’ parts. These parts are now ready to be sprinkled over the nutrient-rich top-soil-layer of your Bonsai tree. Keep it moist (preferably by misting daily) and within a few weeks you will notice the moss starts growing.

Similarly, you can grow the moss separately in flat containers, so you have a supply ready when you need it.

Some inspirational images of moss on Bonsai trees: 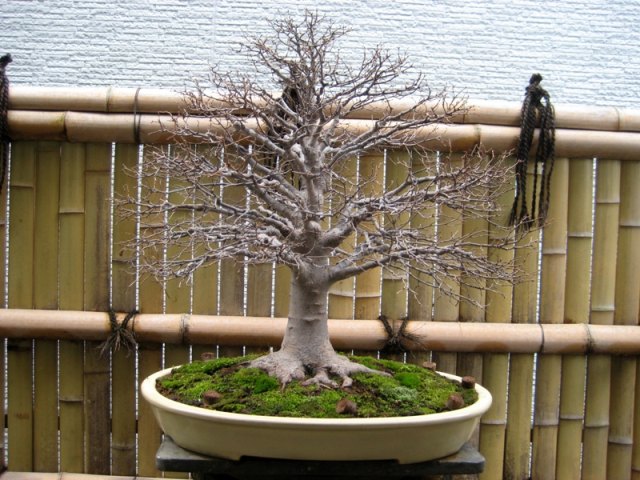 Moss on a Bonsai tree in Japan 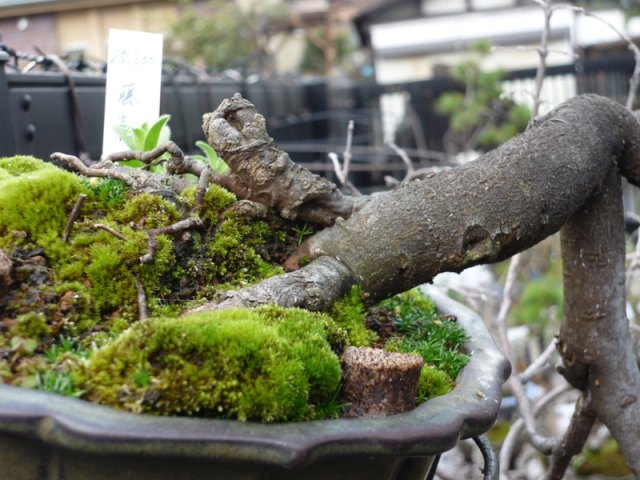 Moss on a cascade Bonsai 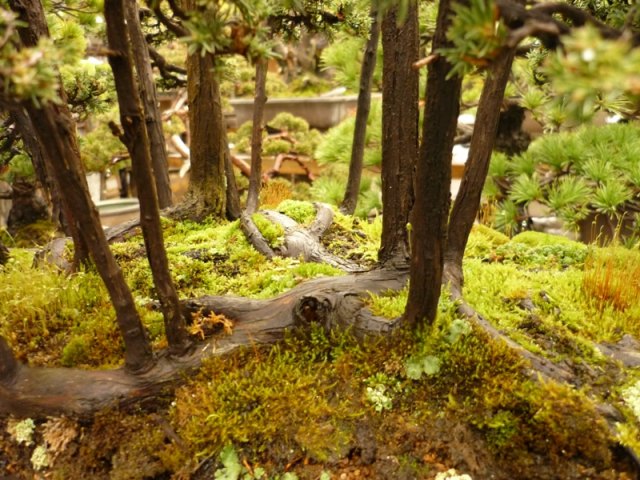 Patches of moss on a Forest Bonsai