The use of Haiku in a Tokonoma display

If you’ve ever attended one of my talks on displaying Bonsai. you will recall my enthusiasm for doffing the cap towards traditional Japanese display ethics while adopting those principles for our own environment and indigenous tree species here in the UK or Northern Europe.

In this display with English oak, I made this scroll with a traditional brush painted Haiku poem for a theme on hibernation, which could be considered perfect for early to mid winter display.

Haiku is not easy to conceive, as the seventeen syllables of verse in three lines need to convey a season whilst incorporating a distinct pause. You will often see scrolls with calligraphy used in Japanese Bonsai display and they often allude to some poetic theme based on Haiku or similar descriptive verse. 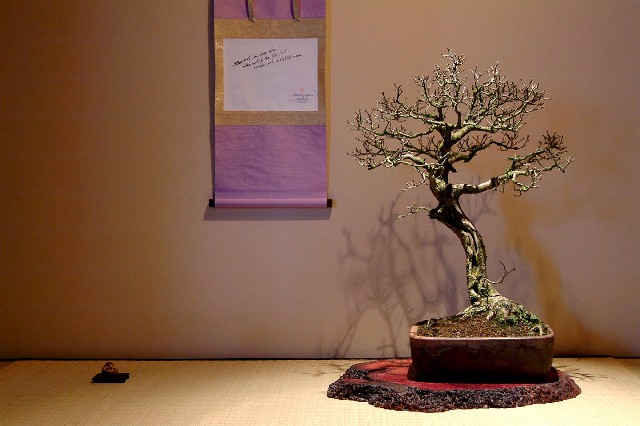 This arrangement was specially lit from above in my tokonoma, with a low power tungsten lamp to remind us of the bright moon on a still winter night. For all you learned photographic types, the exposure was almost a full minute to give me ample depth of focus whilst still retaining rich colors with low digital ‘noise’ artifacts.

So……to the verse and I apologize to those who have read this before:

Consider each word, which very carefully chosen describe sentiments and emotions, while painting a picture in your mind. Here the verse tells of something securely asleep perhaps in a hollow of the protective roots of an old oak on a very still and clear frosty night, under the moon. It might be considered here that the hedgehog accessory is totally superfluous in the display because the verse itself should lead you to that ultimate conclusion. Good display should provoke the whole scene without actually having to state every detail. Here the arrangement would work perfectly well with just tree and scroll balancing one another. The angle of the brush text on the scroll flowing to the right, gently counteracts the tree’s movement to the left, resulting in the stillness of the cold night. Notice also, the stand under the Bonsai which is a heavily textured burr slab. Texture is also good for this season in display. 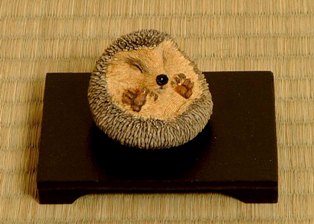 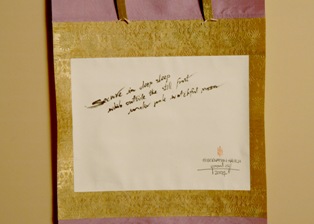 In my opinion, not enough verse or even Haiku is being used constructively in our display efforts. Odd really when you recall our rich heritage of poets. A good classic to consider might be Wordsworth when he ‘….wandered lonely as a cloud that floats on high o’er vales and hills, when all at once I saw a crowd a host of dancing daffodils.....’ etc. Sounds as if this could be spring don’t you think? So come on the bards amongst you, it was 2004 when I created the above. Although it was very well received at the Mark Noelanders Trophy exhibition in Belgium (2005 I think), there seems to be little effort to pick up the concept and move it forward.

As many of you know, I have no problem with picture scrolls, but they are not essential and should only be used to give an insight to missing elements in a display that will complete the overall sentiment, season or emotion. Please don’t be tempted to overstate the obvious as that can be taken as an insult to the intelligent mind. In the way that a single Bonsai can be considered a simplistic abstract statement of nature and the landscape, so too must the overall display arrangement.

Written by: Paul Goff. "As artist, photographer and video producer, Paul has been creating Bonsai since 1970, many of which are now world renowned. His work has been featured on television, video, books, magazines and exhibitions throughout the UK and Europe." Visit bonsaipresentations.com for more info and read this article, Bonsai moss, to read more about covering the soil surface of your tree with moss.