When I was a child, I was hooked on playing with model trains.

It was pure bliss for me to spend hours watching trains running on the railway tracks in my room. However, my interest gradually and strangely moved to something else - bonsai.

How it started; from idea to the Bonsai treehouse concept

People may think that an elementary school student who loves Bonsai has a refined taste, but I played with Bonsai in a simple, innocent way. I just put soil and moss on the lid of a beer bottle and inserted a tree branch. Then, I put it on my palm and enjoyed looking at it from a variety of different angles. Though I might have been a child playing Bonsai. I really enjoyed the journey. While looking at my Bonsai. I felt as if I were standing on the moss of the Bonsai branch. Miniature me was looking up at the big Bonsai tree. I saw that vision clearly. Of course, it was my imagination, but the clear vision I saw was very realistic. 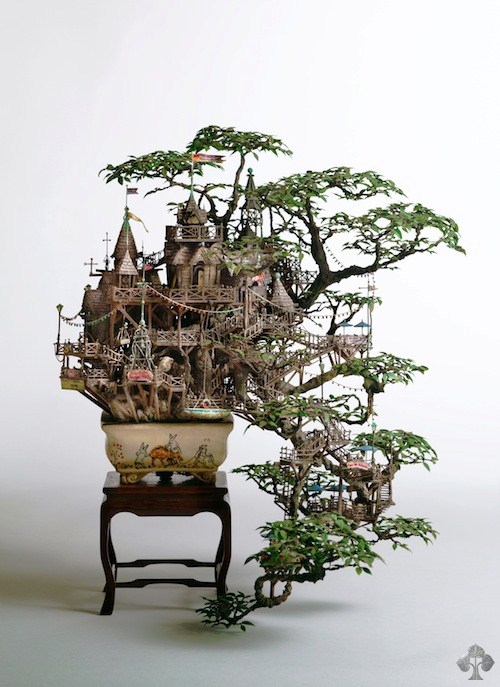 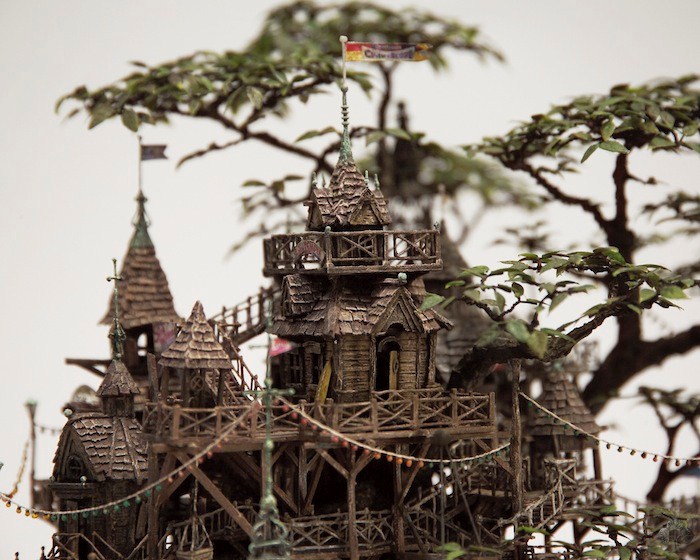 Closeup of a creation by Takanori Aiba

In my mid-30s, long after I had forgotten that I had experienced such a wonder, I visited the American Museum of Natural History in Central Park West almost every time I went to New York on business. The museum displays fossils of large dinosaurs and specimens of plants and animals. The diorama exhibits are especially wonderful, and the detail-obsessed method of display is more entertaining than realistic. Behind the American Museum of Natural History, there is a shop named Maxilla & Mandible that sells science-related merchandise. Specimens of butterflies and animal bones are sold as artworks and souvenirs. I found the shop by chance and went in to explore. A variety of insect dioramas housed under glass domes caught my eye. When I saw them, I was shocked as a feeling I'd never felt before ran through my body. In front of the incredible works that looked as if they had been cut out of the grass in a forest inhabited by insects, I felt as though time had stopped. The next moment, vivid memories of the Bonsai world (a miniature world that I, a miniature me, had entered) I had experienced as an elementary school student came back to me.

Since then, I have devoted myself to Bonsai (dioramas). The more I am absorbed, the greater my ability to be one with the tiny world I had cultivated. In my work, I frequently draw spaces and worlds that do not exist on the earth. Putting myself into the miniature world allows me to adjust the size of anything and see objects going through unbelievable metamorphoses. It may be hard to believe, but for me, a bowling pin looks like a 30-story building. A gorgeous antique clock seems like the Empire State Building or a luxurious, high-rise hotel. A rusty empty can I bought in Hawaii looks like a resort and a rugged stone on the riverside looks like a solitary island in the ocean. When a sophisticated cottage and beach appear on the stone island in my vision, the island starts to exist as a genuine private island. My Bonsai world broadens. 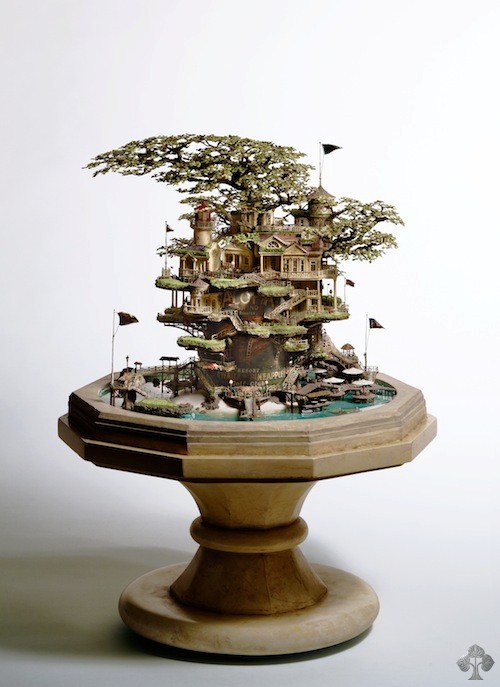 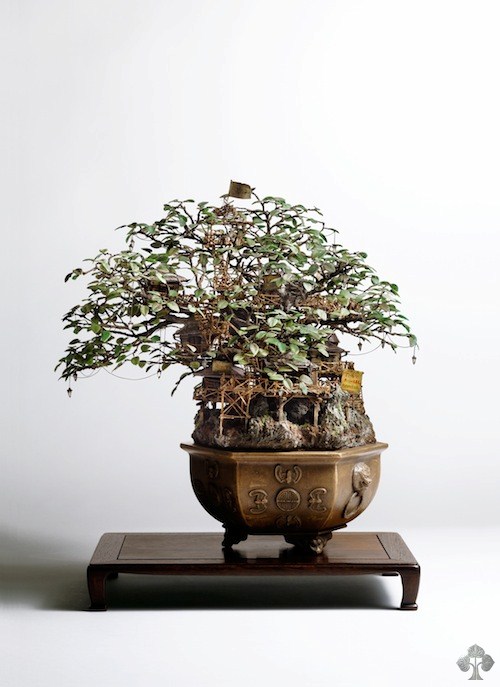 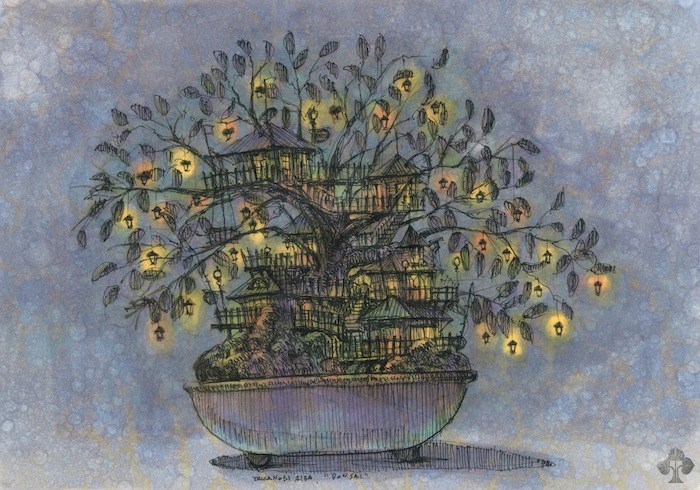 Original drawing of a Bonsai treehouse by Takanori Aiba

Though it may be hard for you to share my experiences because they are very personal, I think bonsai (diorama) is a world of joy for imaginative people that can be a theme park, a resort, or anything. If I can create bonsai (diorama) on my own, I can make the rules for the world and stories of fantasy. Furthermore, once I enter the bonsai (diorama) world I’ve created, I enjoy playing in that fantasy. Maybe I want many people to share this happiness.

A few inspirational photos of the Bonsai treehouse 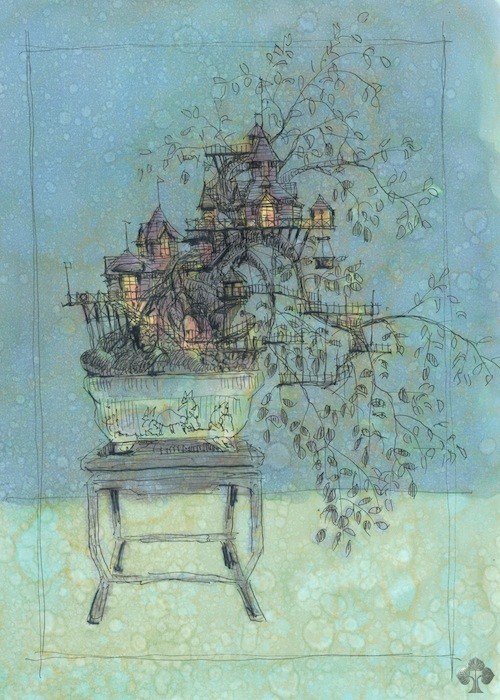 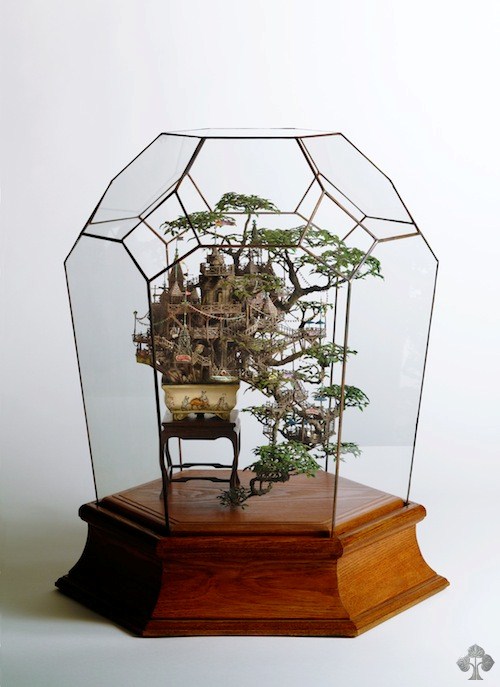 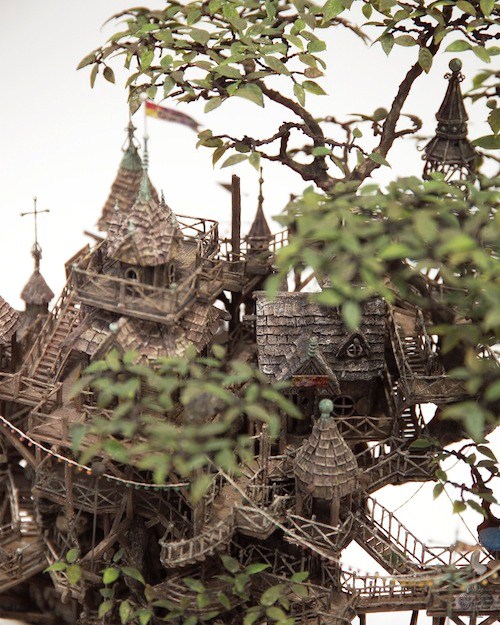 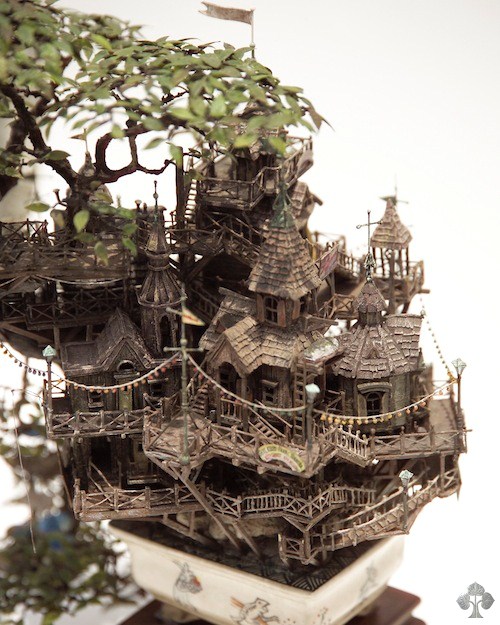