The use of virtuals in Bonsai design

Every Bonsai artist whether professional or recreational, creates an image in one’s mind to design and shape the tree in front of them. In most cases this image is of a finished tree in its mature and final state.

Our vision of a Bonsai is inspired by existing trees, pictures in books, the internet, and the greatest source of inspiration - nature itself. Sometimes it’s hard to get a good image when shaping a tree from scratch especially when working with Yamadori or garden center material. Most of the times the starting material looks messy, with branches and foliage everywhere and sometimes even with almost no foliage, only growing on the ends of long branches.

At this point the easiest way to get the design right is by making a virtual. This not only helps you design the shape of the tree, but also presents a comprehensible image of what the tree might look like in the future. This visualization can represent the final appearance you have in mind, but at the same time it can be modified almost instantaneously.

Virtuals also come in handy when a tree already had its first or even later styling. Sometimes while looking at the tree for a long period as it is growing, you can come up with fresh new ideas and maybe better options for the tree or lets you see a completely new composition that may be better.

At this point it is easy to grab your tools, to start wiring and cutting away, but to make sure you make the right decisions sometimes the best thing is to make a sketch or virtual first. 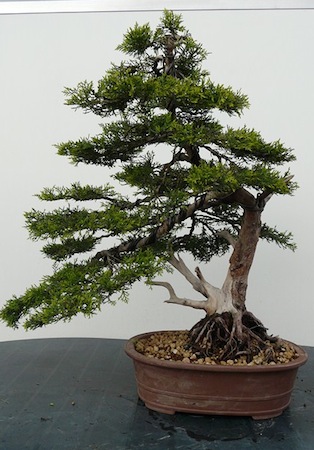 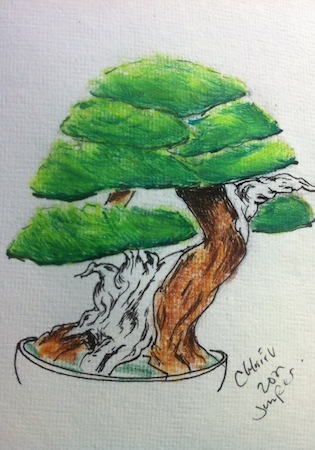 This particular tree I bought from someone because it looked like it had potential and I almost got it for free. It’s the same tree that is shown in the above picture next to me.
I wanted it to be more compact and full as the previous owner styled it high and open. The tree looked too large and wide for its thin trunk and had a weird curve from its trunk to its first branch. So after drawing out some options I decided it was going to be shaped as the virtual in the second picture.

I repotted the tree, tilted it and cut the top off. Branches were placed, the foliage was opened and pruned, and the result way better. Next season if all goes well, it will be placed in a nice pot Bryan Allbright made.

A virtual can be created in many different ways. Most artist use computer programs such as Paint or Adobe Photoshop, but this can take time, and one always needs a computer at hand. This is the reason why there are still some artists who prefer to be more traditional and use pen and paper. Personally, this is my favorite technique, but of course, not everyone can easily draw a visual of a tree by hand.
Drawing manually not only gives you the advantage to quickly sketch an idea, but it also allows you to finish a detailed illustration much faster than a computer generated image so that you may begin to style the tree with no delay.

John Naka for example, a great Bonsai artists, has always used sketches to design his famous trees. He drew not only for himself but also for other Bonsai artists. The virtuals and sketches he created are almost as famous as his actual trees. 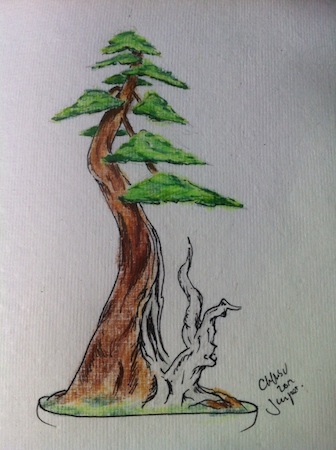 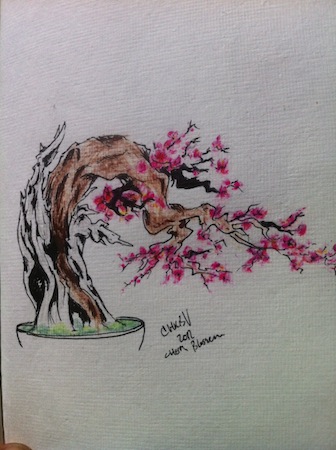 Two examples I made to style my trees. 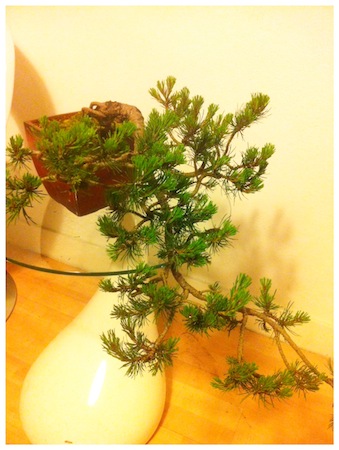 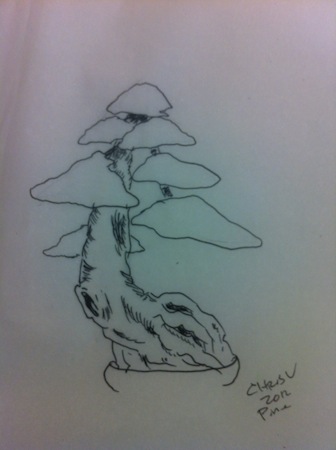 After observing this pine which grew as a cascade for a couple of years I started out drawing the tree as an informal upright. 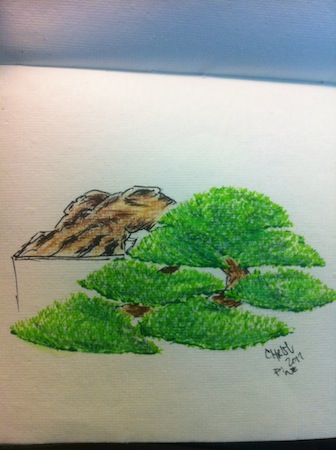 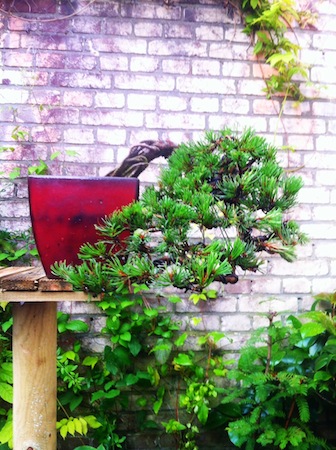 Because it was growing as a cascade already I thought it would be best to go for that style. Then I came up with a sketch for semi cascade which was also a good option. 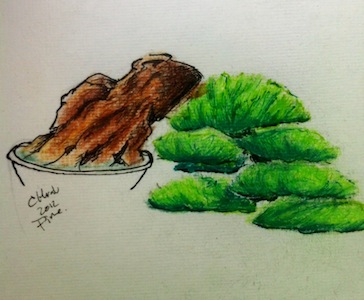 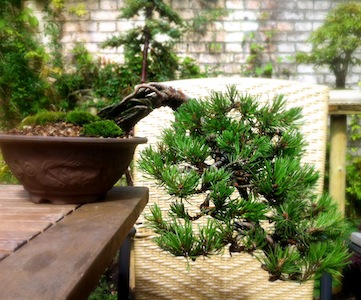 I already had a couple of semi cascade pines, so I drew a virtual of the tree cascading fully but not away from the pot to keep it a bit more interesting. By choosing to go for a kengai and using the whole tree, I can always go back to my earlier sketches and make it han kengai later. The picture below shows the result after an hour work. It is still a bit messy but I couldn’t wire all the way up to the foliage, because its new needles just started to pop out. So by drawing sketches in between designing and shaping, no branches were cut off accidentally so this tree can go and grow and maybe be reshaped in the future… 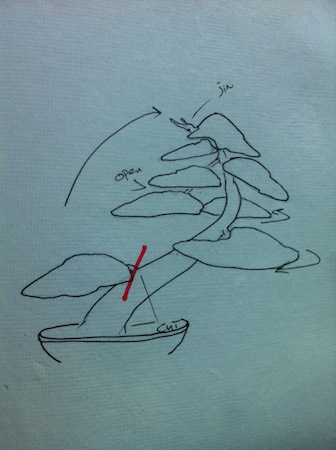 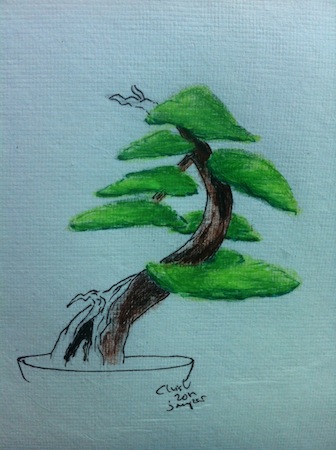 And just as I predicted, that happened.

After a couple of months observing its shape, it didn’t look right so I went for han kengai after all. It’s repotted into a smaller pot but still needs a lot of work.

From rough sketch to virtual.

So creating virtuals is a lot of fun, they show you various end results, and a very important aspect of it is that it can prevent you from cutting off wrong parts such as branches and foliage. We all know that it is easier to remove parts than to grow them back. I think that it is a great help in designing and styling Bonsai. We should make use of the advantage these virtuals give us. It’s also a way to help others, who have no idea at a given moment what to do with a specific tree and to suggest to them fresh ideas and various options. I find that making quick sketches in between can give you a clear overview of what to do.

I start out with some rough sketches because in sketches it’s easy to make adjustments and make notes about certain actions like what branches to cut and what way to bend them. After I decide what design I’m using I create a virtual to get a glimpse of what the tree might look like in the future.

So as Bonsai is a form of art in many ways, creating virtuals is a big part of it and in my opinion one of the essentials for designing beautiful trees, helping other artists and creating masterpieces.