We stumbled upon this tree when it was displayed at the Pacific Bonsai Museum, and fell in love with it. The creator, David DeGroot, was kind enough to share his work with us, showing how this fascinating tree was created!

Purchased in 2013 from a group of discounted trees at a Woodland, Washington nursery, this tree gave a first impression of being a good candidate for a formal upright style It was balled and burlapped in a large nursery pot, so I could not see the lowest part of the trunk; and the foliage was so thick, I could not see the upper trunk, but the price was attractive, so I bought it on faith. When I got it home and began to remove branches and cut away the burlap, I began to see what a mistake I had made. There was a bend in the trunk just above the root base, and the upper trunk had not one but two right angle bends! I had to discard any notion of conventional styling. 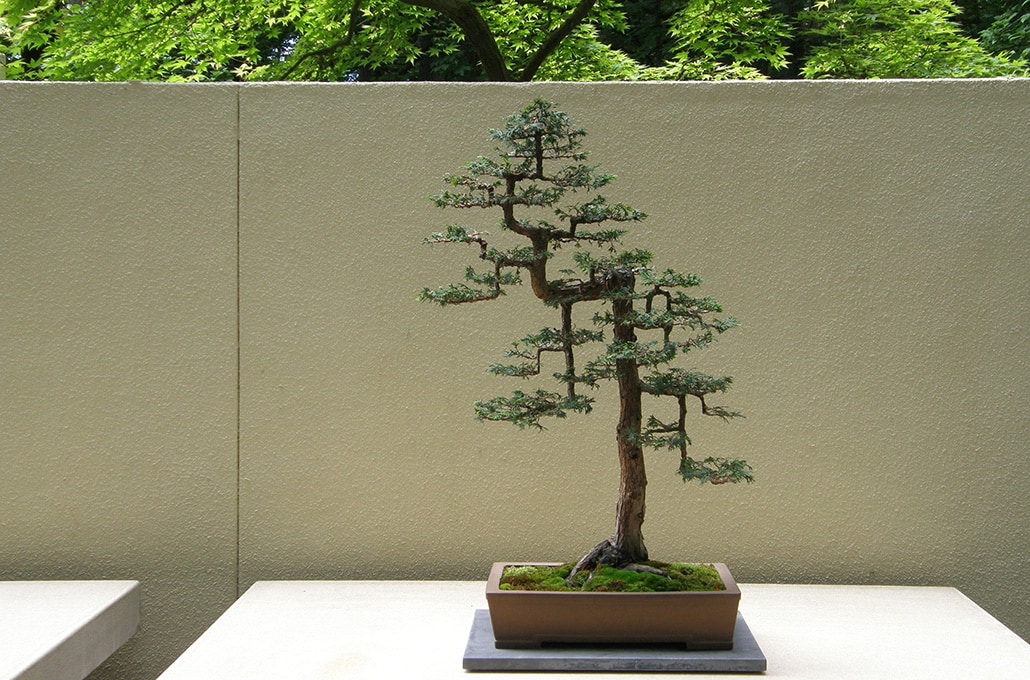 I was aware of the Chinese “Square Turns” style that has right-angle changes here and there in the trunk and branch structure, but otherwise appears rather “normal”. I decided to style this tree in a completely abstract way and I find it quite satisfying. The angles in the branches remind me of an old Steve Martin musical routine called “King Tut” that was later parodied by the band “The Bangles”, calling it “Walk like an Egyptian”, so that is the name I have given this bonsai.Many thanks to David DeGroot for sharing the making process of his unique bonsai!

How the Bonsai was designed 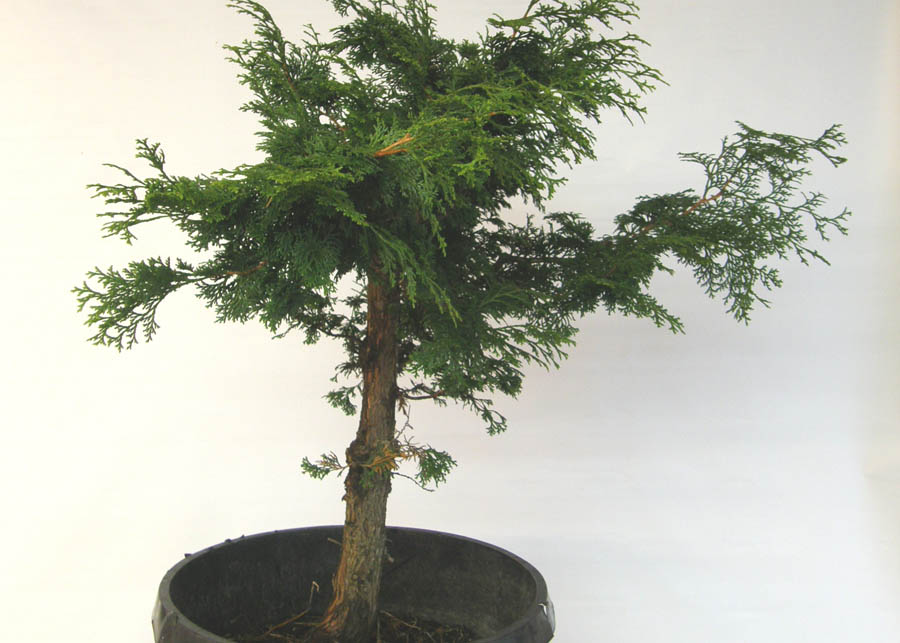 This tree sat in my driveway for about a month after I brought it home in 2013 from the nursery and discovered the two right-angle bends in the trunk. 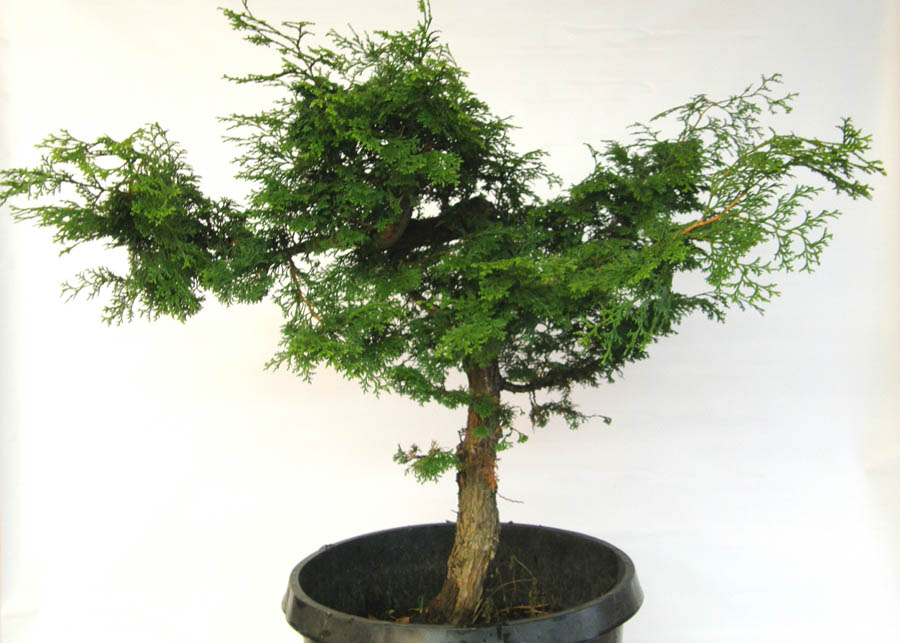 I tried turning it so the upper trunk moved either directly to the front or to the rear in an attempt to minimize the movement, but no viewing angle could disguise the bends because they were simply too large. 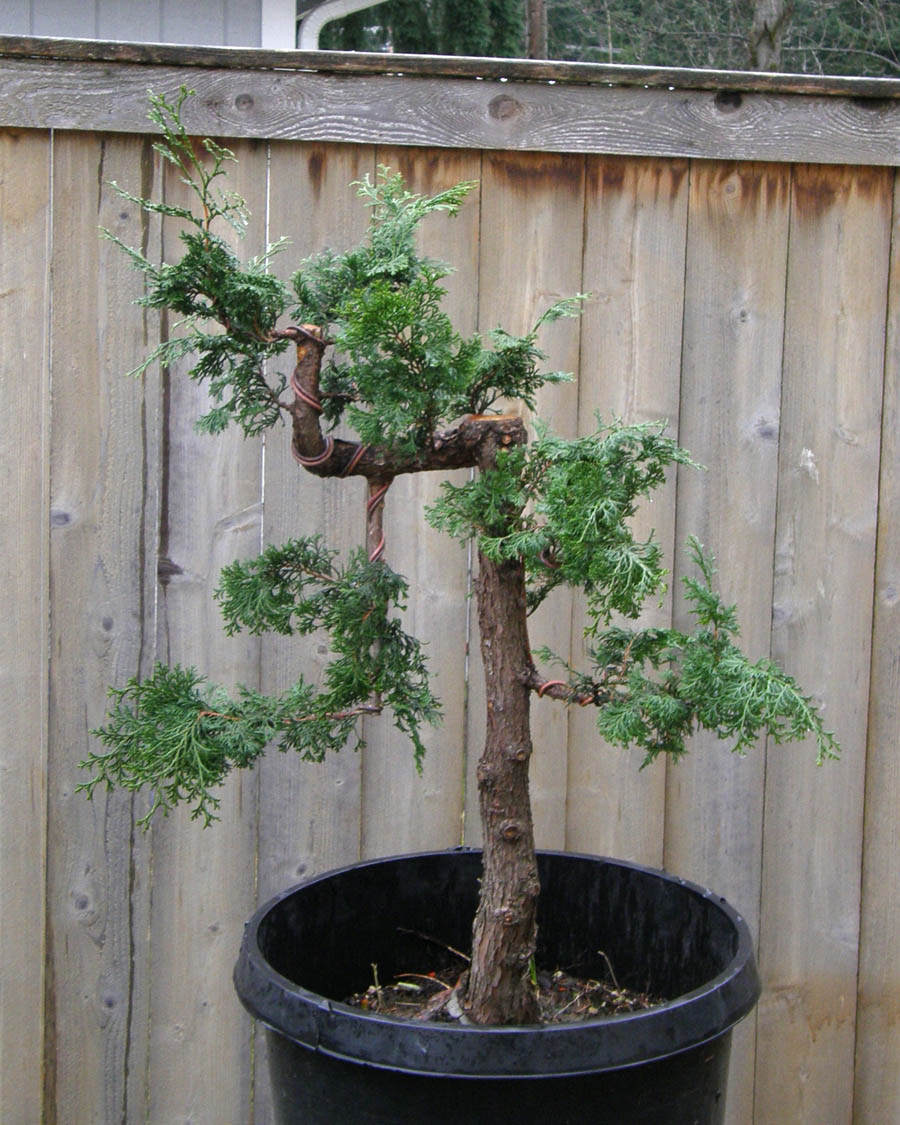 I decided to abandon any sort of conventional styling and proceeded to mimic the movement of the trunk by wiring all branches into a series if straight lines and right angles. 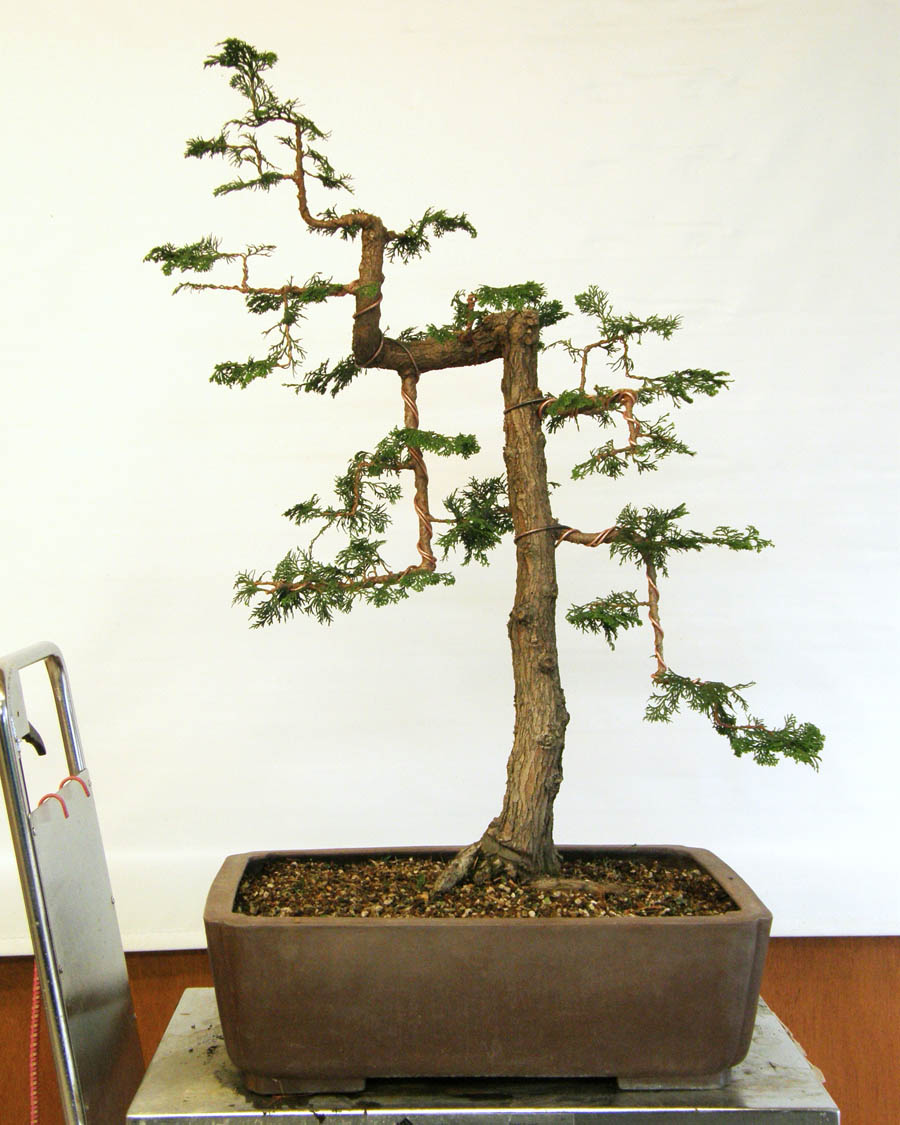 2015 - My first thought was of proportion, so I determined that the length of trunk to the first bend should be about 60% of the total height, while the tree above that point should be about 40% of the total. I grew the tree on for two years, gradually extending the branch structure. Controlling the density of the foliage would be critical if the branch structure were to remain visible, so I was careful to allow only a single branch to emerge at any one point, and to train the foliage masses as flat pads.
When I removed the tree from its nursery pot and burlap wrapping, I discovered that the lowest part of the trunk was not straight, the root base was not symmetrical, and there was a large circling root that left a deep scar when I removed it. Rather than be frustrated by these imperfections, I chose to view them as one would view an accidental run or drip of glaze on a pot – not as something that ruined perfection but rather as something that imparted individuality and interest. I transferred the tree to a deep training pot, and then was able to see more clearly that the developing apex was wandering too far to the left like a story that does not know how to end. It was also starting to affect the visual stability of the tree. 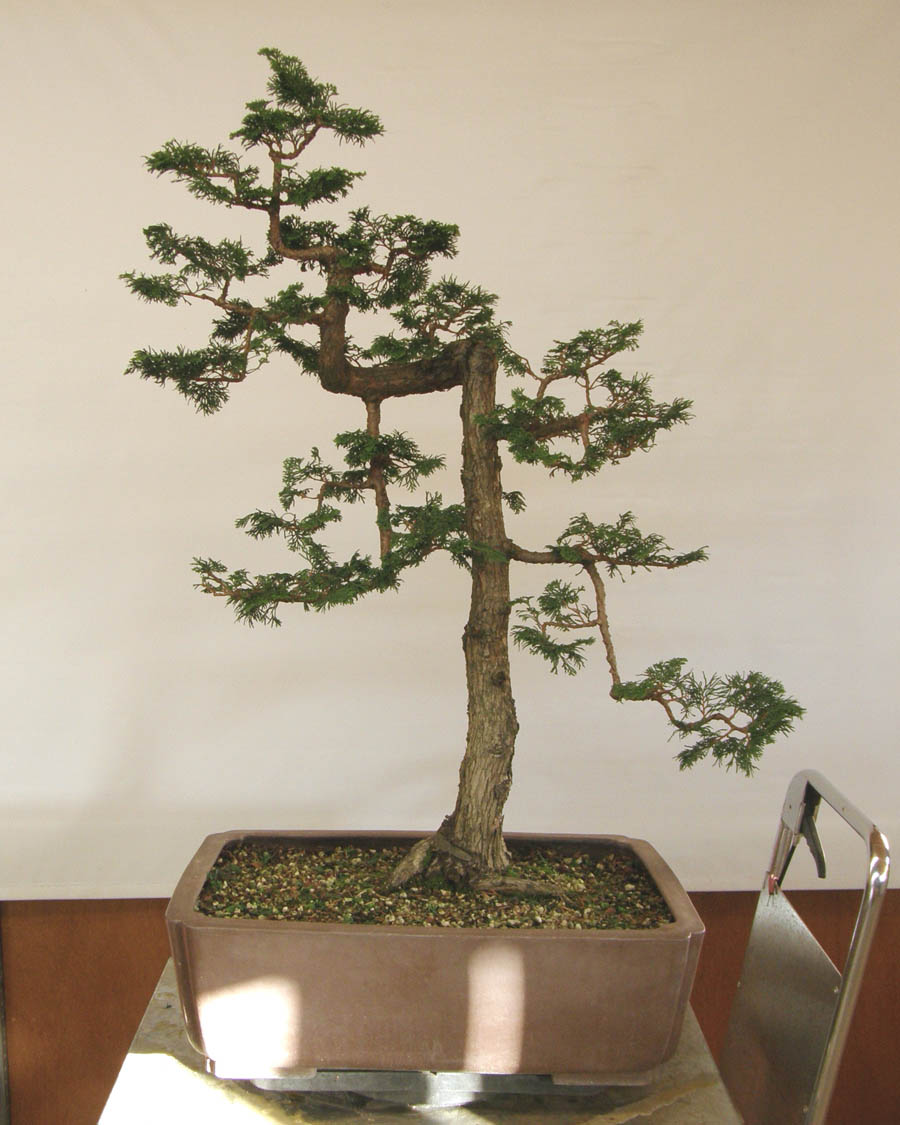 2016 - I had to ponder this for a while, and by the following year, decided that moving the apex back to the right would help solve the problem. 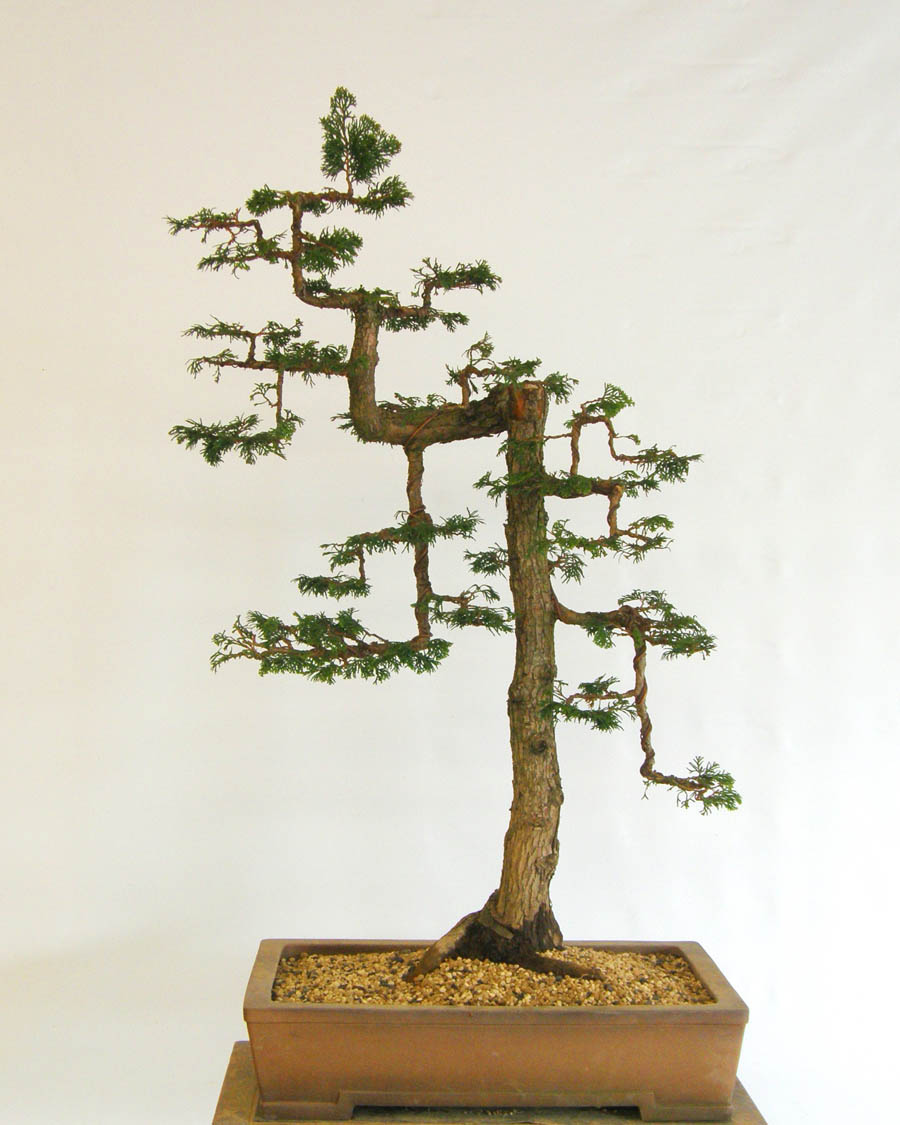 In 2017 I transferred the tree to its present Chinese pot that has lines that mimic the movement in the tree, and re-set the branches. By the following year, the final shape had been pretty well achieved. 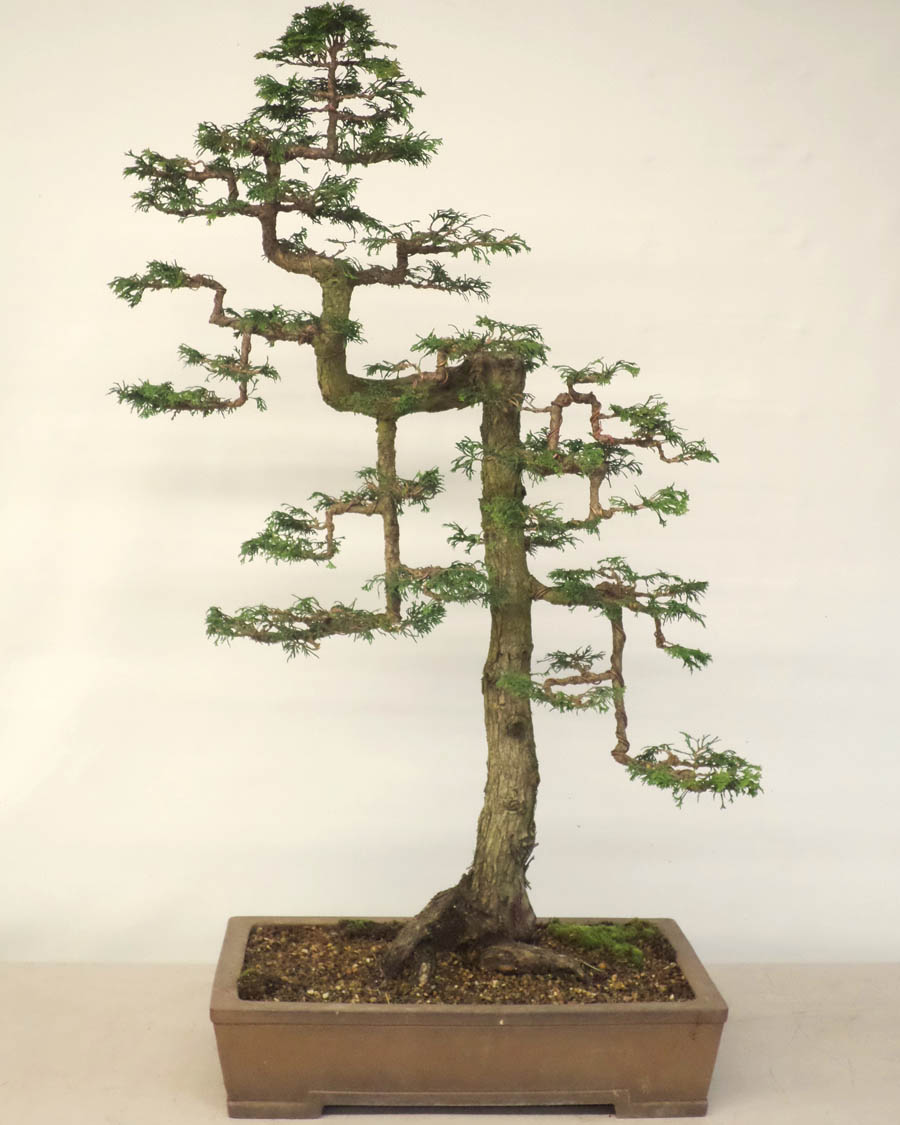 2020 - I judge bonsai – or all art, really by three criteria – PROPORTION, BALANCE, and HARMONY. In terms of proportion, this tree does not follow my Ideal of the Fibonacci sequence in all its parts, but there is an overall progression of larger elements and intervals to smaller that I find satisfying. The balance is primarily stable rather than dynamic, which means it could almost (not quite) stand on its own without the visual mass of the pot. There is also balance in terms of a consistent density between all parts of the tree. Finally, there are tension elements such as flaws mentioned earlier and some inconsistencies in overall movement and proportion that are resolved by repose elements such a consistent, predictable series of lines and angles that tie the tree together and provide a sense of harmony. 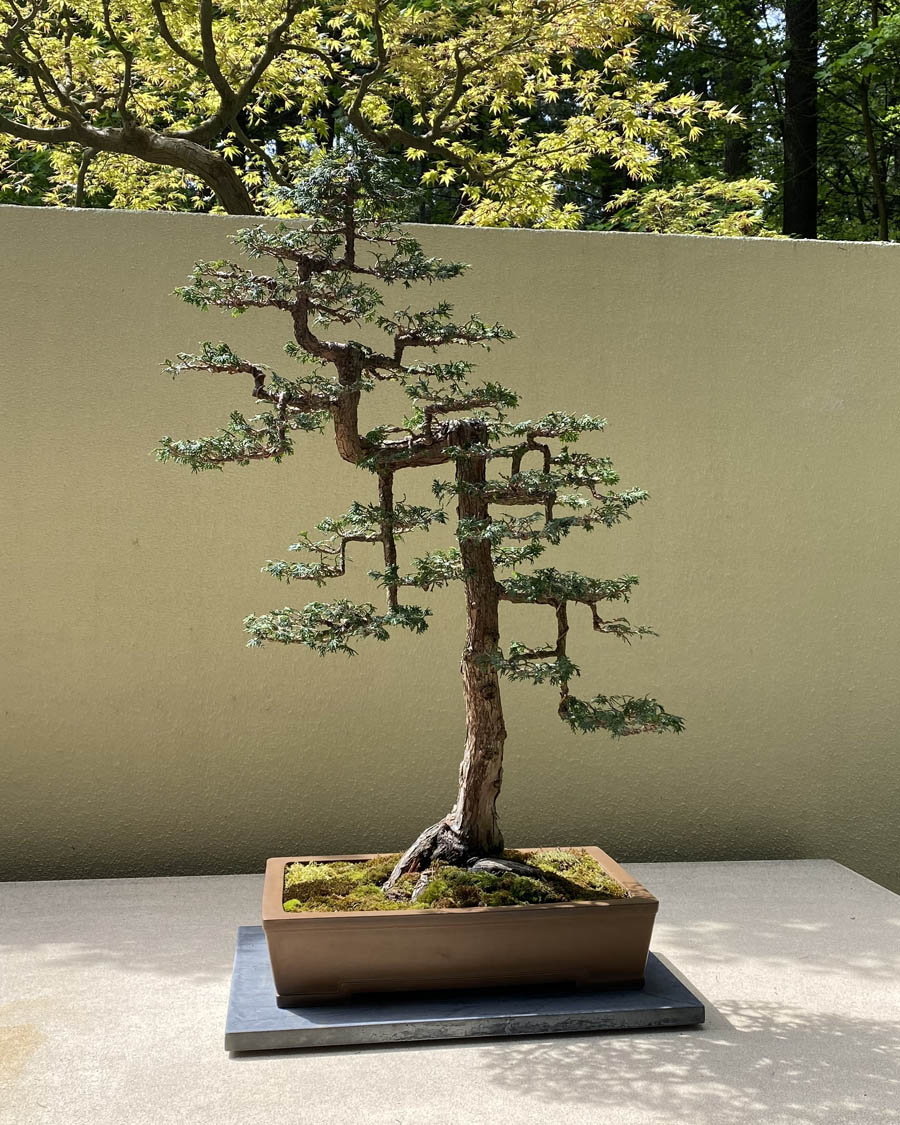 This photo, taken in 2022, shows the tree as it was installed at my Retrospective exhibit at the Pacific Bonsai Museum this year. It was pruned hard for the exhibit, because the tree cannot be kept in show condition at all times. I let the tree get very full during the growing season in order to build up energy, and then prune and wire in the fall to once again allow it to “Walk like an Egyptian”. 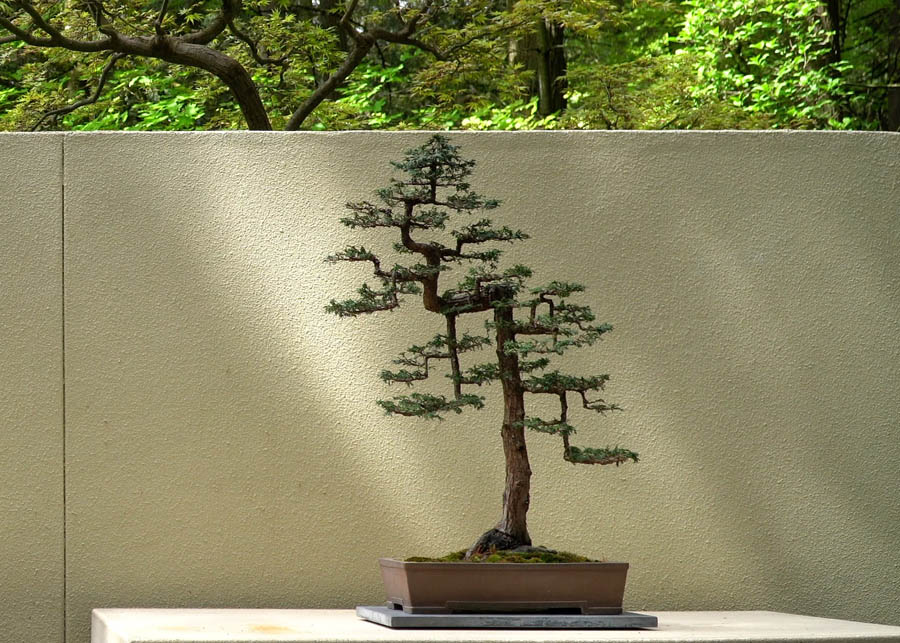 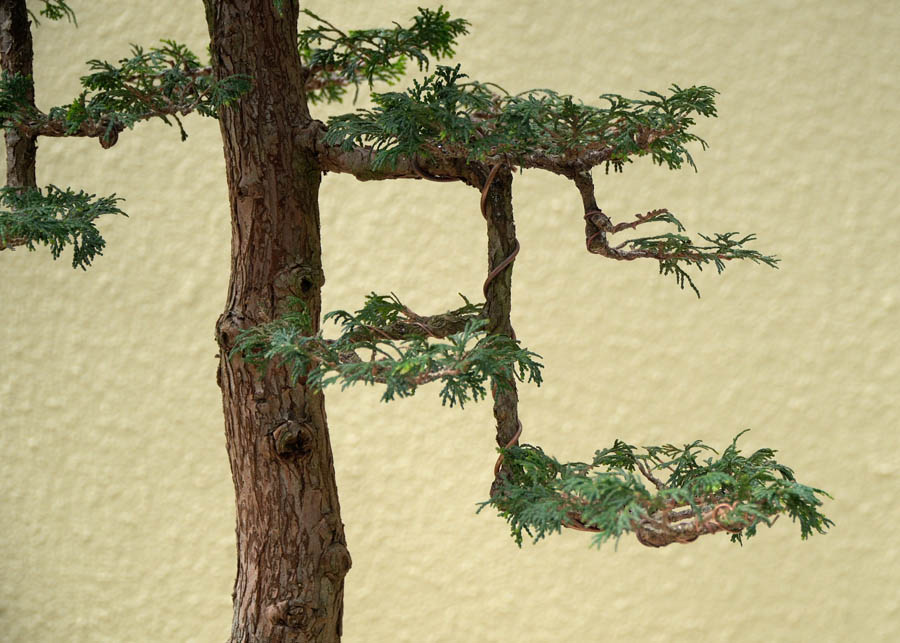 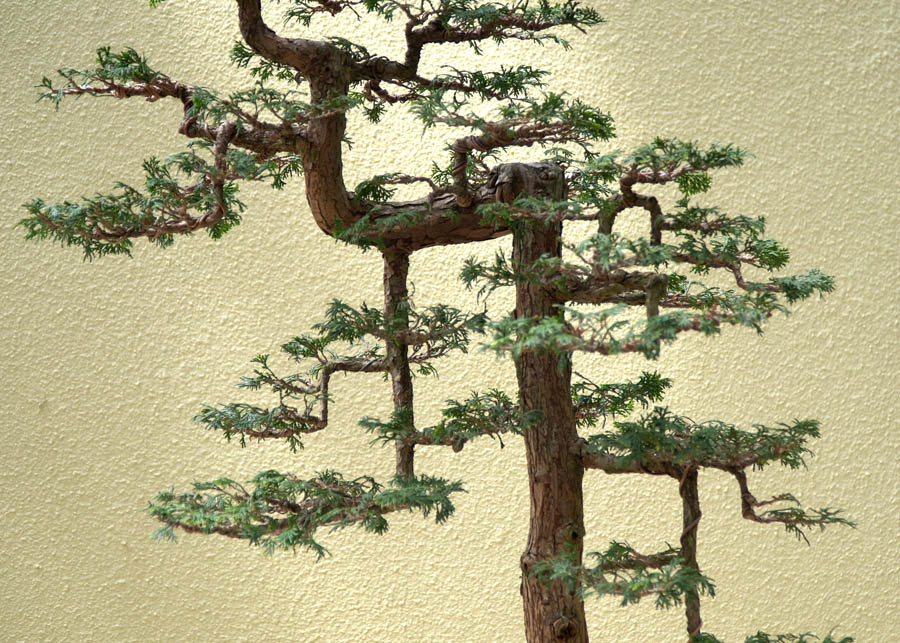 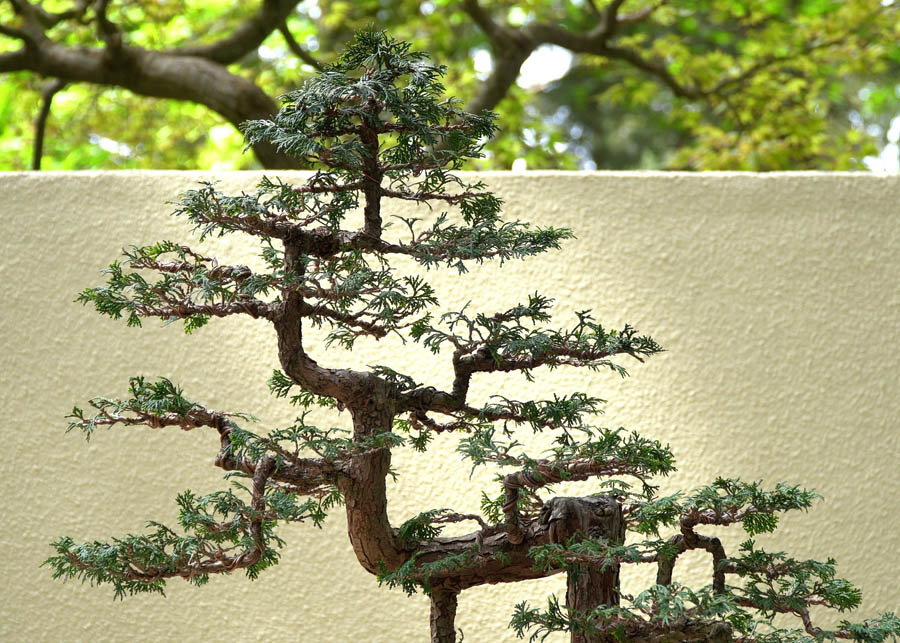