The famous US National bonsai

Truth is, this tree really needs no introduction, especially not from the likes of someone such as myself.

Goshin is quite literally the most well-recognized Bonsai in the United States, which would put it pretty high in the running for most recognized world-wide. Even among Japanese professionals at the highest level, ‘Goshin’ is a familiar bonsai.

When it comes to Bonsai recognition, unforgettability (possibly not a real word) is king, followed by age. At this point in its life, Goshin has both in spades. As if that wasn’t enough, it was also created by Mr. John Yoshio Naka, Legendary American Bonsai artist and the man credited with a vast majority of the spread of Bonsai culture throughout the Americas. This is a one of a kind bonsai.

In this article, Danny Coffey shares a collection of photos of Goshin through its long history and development, talk a little bit about the tree and toss in a few facts and other interesting things that he discovered in his studies of Goshin. Enjoy reading!

I’d like to start it all off with this great letter written by Mr.Naka to the president of the NBF back in 1984. 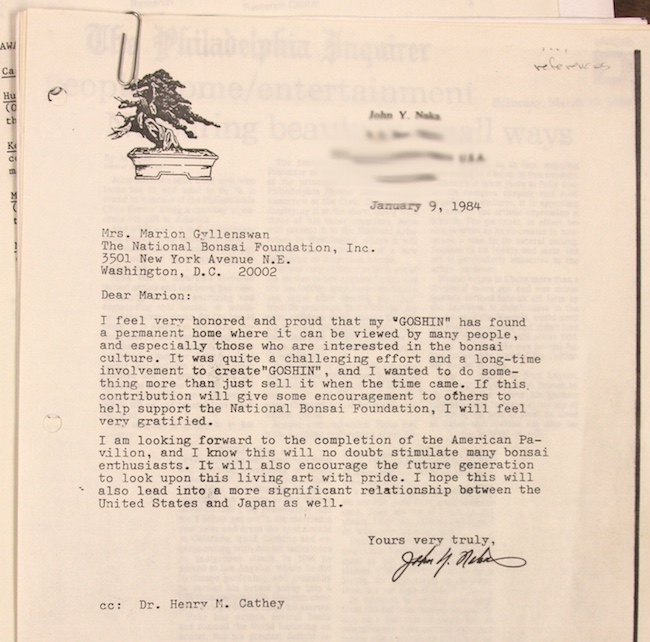 Letter from John Naka in 1984 regarding the donation of Goshin to the National Bonsai and Penjing museum.

“I feel very honored and proud that my “GOSHIN” has found a permanent home where it can be viewed by many people, and especially those who are interested in the Bonsai culture. It was quite a challenging effort and a long-time involvement to create “GOSHIN” and I wanted to do something more than just sell it when the time came. If this contribution will give some encouragement to others to help support the National Bonsai Foundation, I will feel very gratified.

Im looking forward to the completion of the American pavilion and I know this will no doubt stimulate many Bonsai enthusiasts. It will also encourage the future generation to look upon this living art with pride. I hope this will also lead to a more significant relationship between the United States and Japan as well.”

Reading this letter put a huge smile on my face. At the time it was written I was just 2 years old. Several of my peers in the Bonsai industry where not yet born and some are just a few years older than me. It’s almost as if Mr.Naka had us in mind when writing this. Though I know he was casting a net for several generations to follow, it’s an honor to be among those succeeding him. We’re quite lucky to have such and incredible Bonsai legacy here in the US.

About Goshin, this Bonsai forest came together very slowly over a long period of time. Interestingly, the first tree in the 11 tree forest is actually the smallest of them all and located in the back of the composition, hidden by the larger, younger and more visually dominant trees in the forest. This first small Bonsai was actually Mr. Naka’s first public demonstration tree back in 1953. From there it continued to grow and evolve. The name ‘Goshin’ roughly translates from Japanese to English as “Spirit Guardian”. Each tree in the composition represents one of Mr. Naka’s grandchildren up to and the time that was building the forest, though he has more grandchildren in total now. Starting with a 4 tree composition, then seven, then a few years later 11. By 1973 the forest was considered complete and the same 11 tree forest remains. Imagine being Mr. Naka’s oldest grandchild and realizing that the smallest and least visible tree in the composition is how you are represented. I’ve heard stories of Mr. Naka comforting his oldest grandson by revealing the fact that the two most important trees in any Bonsai forest composition are the largest and the smallest trees. These are the boundaries that contain all of the other trees, without them everything falls apart.

From here forward I’ll simply show a group of photos of ‘Goshin’ in chronological order (to the best of my ability). Some of these photos are from unknown dates, so I’ve done my best to place them in the order that I think is appropriate. Here we go!