Cannabis or Weed plants as Bonsai?

Bonsai is something that fascinates people, and this fascination has led to several jokes and hoaxes on the internet. The Bonsai kitten (little kitten held for years in small glass jars) is probably the #1 story in this category, it was even investigated by the FBI, and luckily turned out to be fake!

Another story we heard before is about Marijuana Bonsai plants. Hoax or not?

What's in a name?

The word “bonsai” is a Japanese term which, literally translated, means “planted in a container”.

The connotations or added/implied Bonsai tree meanings include:

Continue reading on our What is Bonsai page.

Since Bonsai literally translates as "plant in pot", any plant (also a Marijuana plant) can be rightfully named a bonsai.

Having said that, the discussion above on the implied Bonsai tree meaning already shows we look for certain characteristics before calling a plant a Bonsai. These include a wooden trunk, a radial root base, well structured branching and small leaves.

Now we're no expert at Cannabis plants, but we're pretty sure these plants don't grow trunks very well, definitely don't grow branches like trees do and the leaves are difficult to reduce in size.

Let's have a look then at two photos that many blogs have shown as "Bonsai trees": 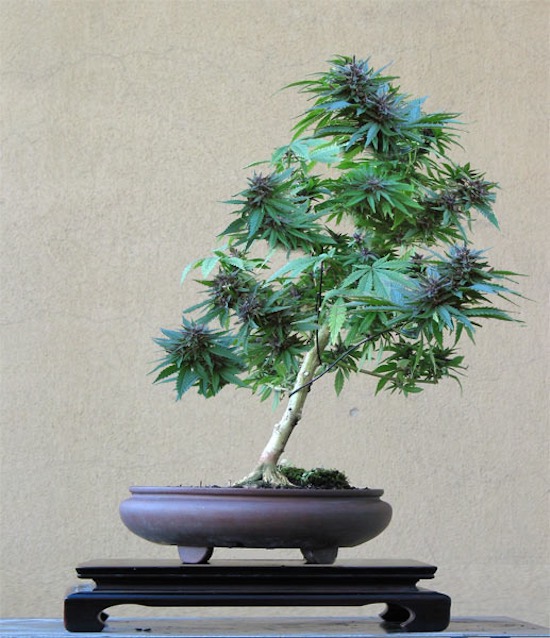 A cannabis Bonsai plant, or a photoshop trick? Photo by Ulf.

So, is this a real Marijuana Bonsai plant?

Look closely at the photo above, this one has been discussed to great extent on the Bonsai Reddit and as Sofasoft there put forward, the photo is fake. The photo is unnaturally flat, the flowers are all of the same size and show no depth, the shadows don't make sense and all the branches are not visible. This is a fake.

Since I mentioned the Bonsai Reddit page, I need to mention this is very interesting source of Bonsai photos and stories. Check it out if you have the time.

The photo below is also one we came across several times. It looks quite realistic and we found no obvious photoshop edits, I'm quite confident it is real. You decide if this is a Marijuana Bonsai. or just a small Marijuana plant in a Bonsai pot ;-) 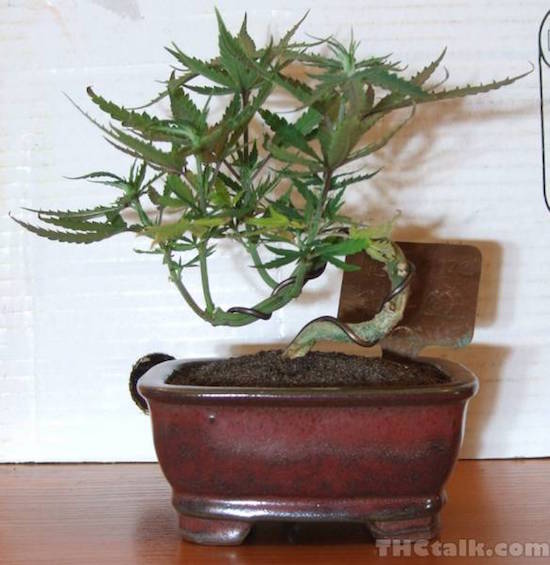 Shaped Marijuana plant in a Bonsai pot, photo by THCtalk.