The most famous and popular Bonsai destination in Japan is, without doubt, the Omiya Bonsai village. The village is actually a suburb of Tokyo, where five well known nurseries are located close to each other.

Omiya Bonsai also became an important institution for Bonsai education in Japan. Despite its great success, we haven’t seen something similar appear in Europe or the USA. At least, not yet… An interview with Michael Hagedorn.

In the introduction we talked about the Omiya Bonsai village, what do you think explains its success?

Michael: The Omiya Bonsai Village was started by Mr. Shimizu, and he ran it with Mr. Kato. The idea was revolutionary, and it worked. People who were interested in Bonsai knew where to go. Those that were there, the professionals, saw a huge increase in traffic. Equally important, the Omiya professionals were able to develop specialties, which, for anyone serious about their profession, is a strength.

Even now, the Portland Village idea seems definitely new and alternative. And yet we have a history that shows it worked. Many of today’s most famous masters in Japan studied as apprentices in Omiya, and so that transcendent history speaks for itself. It was a crucible of great learning.

I think the reason this kind of situation works is the same as any other community, you get to share your strengths with others, and also learn from other's strengths. You don't get that if you live on a mountaintop. I've lived on a few and I speak from experience. I really don't think the West is in a position to be selfish with our techniques, our knowledge. Those who know have to share, or we'll be nowhere real fast.

What does it take then to create a real community, something that exceeds a mere collection of nurseries?

Michael: Commitment. It takes a commitment to work with and not against someone in your field who is competing for limited resources. For Bonsai at this moment in time, I think we need a different business model. Worries over competition underplay the benefits. I think by working together and providing things people want, we can build a larger and more active group of students and clients. We're not even close to reaching that potential yet. For instance, in the United States we've seen that every time someone comes back from Japan, the student and client population grows to meet it. Also, all of the Villagers draw from a national student and client base and not a local one. If it were mostly local business, that would be a problem.

Bonsai could have more outreach. And the Village is one model for that. Although the Village's purpose is to offer programs to benefit serious Bonsai enthusiasts, it also has local goals like bringing Bonsai into elementary classrooms and Head Start to plant the seed of beauty and responsibility in youth. Once you move beyond the given community, the Bonsai hobbyist, you get local awareness and energy in the mix. And that’s pretty valuable too.

The Omiya Bonsai village attracts a lot of visitors from across the world, but it also made a large contribution in the bringing Bonsai art to a higher level. Can you elaborate on that?

Michael: When I was young I spent a lot of time around my father, who was a biologist doing research and teaching in universities. I witnessed the energy that was created between his colleagues. What I saw was a group of serious professionals being brave enough not to be hermits, to test their work against the strength of their colleague's. That takes collaboration to some extent. And some faith in the weird math of 1 + 1 = 5. Omiya brought Bonsai to a higher level because they were fearless. The hermit Bonsai professional is a king or queen all right, but actually most are impoverished by lack of polite jousting with other professionals. So that's most of it: They kept one another sharp. You can't slack if someone down the road is doing things at a high level. There are very few people who manage excellent work in isolation. And more than that, within community there is usually an improved progression of work, which is continued depth, and breadth, and connecting the dots.

What exactly is the benefit of a village over conventions, exhibitions and club meetings?

Michael: When the teacher travels, much less is learned than when the student travels. Although not easy to communicate why, this is almost a truism, and not just for Bonsai. If a surgeon were to teach about surgery in your kitchen, you really wouldn’t learn as much as if you studied in a surgery room. Absorptive study in the right environment is key. Any apprenticeship uses this concept, you go and study with your teacher, not the other way around, and the Village is centered on this idea as well.

In Europe and the USA, no Bonsai villages have been established so far, despite a large and growing community of Bonsai enthusiasts. You are working on setting up the first one, can you tell us about how you got this idea?

Michael: It started as a joke, really. I was talking with Ryan Neil when we were apprentices. It was a phone call. And I said, 'When you're done here, come to Portland, Oregon, where I'll be, and we can form another Village.' It was an idea that I just kept thinking about, until I couldn't ignore its strengths and what it could offer the Bonsai community. Not just the professionals, but a deeper and broader Bonsai experience for visitors. And, to finish the story, Ryan did end up moving to Portland, Oregon, where I was, and more followed suit like Matt Reel.

If you had sufficient funds, what would the Portland Bonsai Village look like? What is the ultimate goal?

Michael: Well, if we had a few million, we could actually build a Village on several acres! But we live all over the city of Portland, so the Village is an idea that connects us professionally and is not something physical. Actually one of my ideas is that we should at least eventually have a dormitory in Portland, where financially strapped young apprentices and serious older students can stay and then commute each day to their teachers place. The thing I remember about college is that so much of what you learned happened outside of the classroom. It happened when you were telling stories about the classroom. You were sharing about it. And then the big epiphanies hit. We need that in Bonsai. we need that for our serious students, and I think getting all the students to live together would create that. So, I'm hoping that the Village inspires an entrepreneur to invest in a building in Portland that we could turn into a student residence. 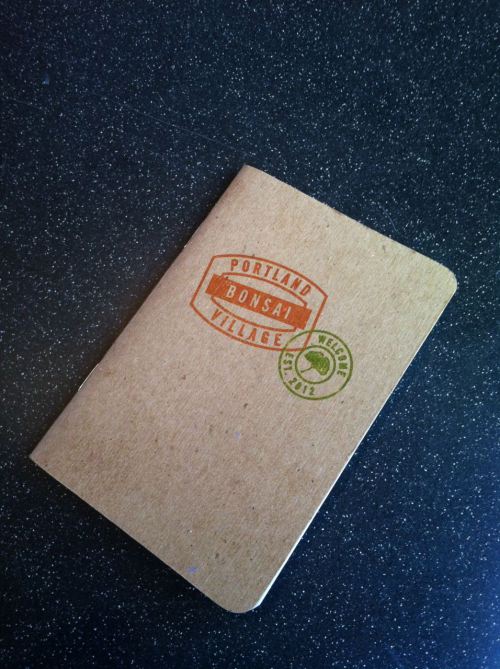 Get your passport stamped at the village' nurseries :)

You started a fundraiser campaign on Indiegogo, can you tell us about that?

Michael: The Indiegogo campaign is a crowdfunding effort to help jumpstart our Village concept. We needed a lot of things, including basic ones like a really good website. It has been an amazing thing to watch! We launched the campaign in late May, and in a few days the Bonsai community had donated $7,000. By the time three weeks had gone by we were well past $18,000. It was a kind of litmus test that the community really wanted to see the Village happen.

What do I get if I support you?

Michael: If you donate to the indiegogo campaign there are perks that you can sign up for, everything from Bonsai lessons to a book, to even a benefit flute concert during the Artisans Cup. And after that, there will be the programs that the Village will help into being. We have educational events planned, and opportunities for all levels of involvement. All that will be detailed and blogged about on the upcoming website.

Michael found a Sunset Bonsai book in a library at age 15, which eventually led to an apprenticeship under Kokufu and Prime Minister award-winning Bonsai master Shinji Suzuki of Nagano, Japan in 2003.