Ones first image when thinking of ‘yamadori’ Bonsai is of a large tree discovered in the mountains with an ancient twisted trunk, shari and jin and beautiful cultivated foliage.

One does not at first think of a yamadori shohin bonsai. There are yamadori style shohin shimpaku that are cultivated to appear as their larger brothers and sisters in the mountains. Some of these are fantastic with all the elements of naturally created yamadori.

However, actually finding a Yamadori shohin Bonsai is difficult and good ones are few and far between. Most high quality shohin trees are cultivated – whether from air-layer, seed or seedling over time, cut down trees that are re-styled as small trees, etc.

By their nature, yamadori trees are survivors – survivors of harsh conditions, drought, extreme heat, wind, winter cold, snow, etc. For a small tree to survive these conditions is that much more difficult. Usually the small, weaker of any species do not survive (think Darwins theory). Disease, paucity of vigor and energy, deficiency of root and foliage mass generally kill off the diminutive, weaker trees before they can continue to develop into larger ones.

Since all of us serious Bonsai enthusiasts and professionals are attracted to yamadori trees, it is natural for us shohin practitioners to seek out yamadori specimens – despite the inherent difficulties. It is not impossible but quite difficult to artificially create deadwood that has the natural aged look of natures brushstrokes. These artificial carvings can only develop those characteristics through aging – mochikomi. Only time can do this! So let us explore this theme of yamadori shohin Bonsai a little and how we can possibly acquire them. 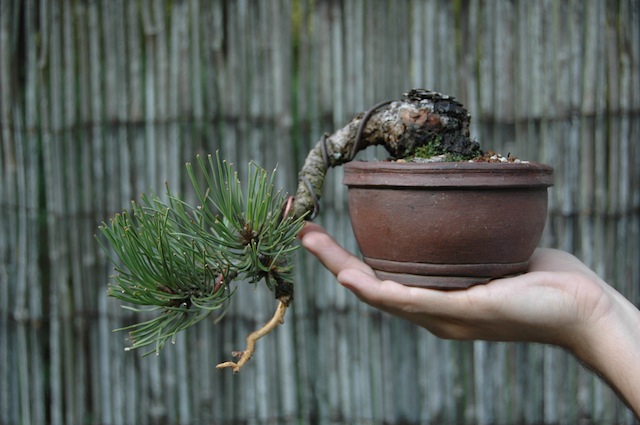 Yamadori Ponderosa Pine (Pinus ponderosa) – this tree was an accent tree exhibited with out shohin by the author in the 2nd US National Exhibition. About 6" (15cm).

This past November I traveled to Japan and visited a rare Bonsai treat. I was asked not to name the artist but he is one of the few great curators of many of the old yamadori shohin in Japan and probably the best creator of deadwood there. We spent time discussing the natural phenomenon of old deadwood. He had some interesting comments when we spoke of shohin Bonsai. He said that young wood (less than 50 years) is not long lived. It will not survive, unless treated, for more than 25 years or so. His opinion was that old yamadori wood that is tight grained will live as long as Bonsai for as old as the tree lived in nature (400 year old yamadori tree deadwood can last for another 400 years). It is something to think about when creating deadwood on shohin trees – they must be treated over the long haul to survive natures corrosion. Their grain is wide and not tight and inherently softer so will decay faster than tight grained wood.

So, is it possible to have this really ancient wood on shohin trees? His solution was to air layer sections from these fantastic large yamadori trees to create shohin yamadori specimens. The photo is one example that he is creating. This tree came from 500-700 year old shimpaku from the mountains of Japan collected in the earlier part of the 20th century. So, we can consider one option of air-layer a small section of a larger yamadori Bonsai tree. It may be a section that is not essential in the overall design for the larger tree. 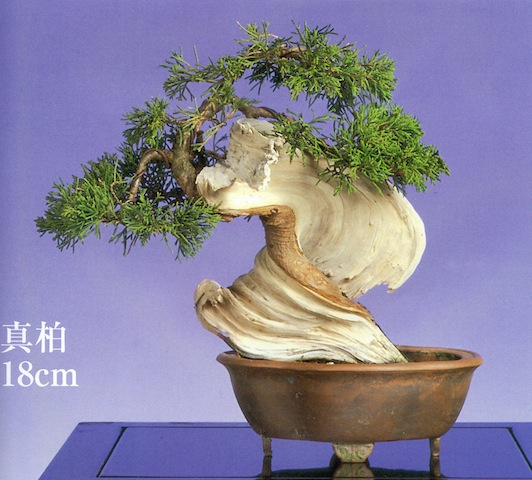 Another option is to try and find shohin specimens when collecting in the mountains or cliff-sides among the many larger trees. I personally do not do much collecting. In the United States most of the better material is in the Western areas of the country – Rocky Mountains, etc. I live on the East Coast. I have asked professional collectors to look for shohin material for me. I have 2 Ponderosa Pine shohin that I am working on and a couple of shohin Rocky Mountain Junipers. The first Ponderosa Pine shown was collected from a small rock crevice in the mountains. The second one was flattened by snow and had to be jacked up with a bar to develop a more upright form. It is still in training and will be tilted more to the right so as to be less horizontally oriented. Both species have inherent challenges for shohin Bonsai. The Ponderosa Pine has long needles that are quite difficult, if not impossible to reduce – especially in non native areas such as where I live. The Rocky Mountain Juniper foliage can be quite lanky and droopy – again in our area – and also do not like the moist air we have here in the Northeast US. So, in both cases, I am considering grafting better shohin type foliage onto the trees – itoigawa onto the Rocky Mountain Junipers and either black pine or scots pine onto the Ponderosa Pine.

On the Internet Bonsai Club, Yvonne Graubaek showed us a nice shohin communis juniper that was collected off a cliff in Sweden about 5 years ago. This is a wonderful little yamadori shohin Bonsai that she has cultivated. She kindly gave me permission to use this photo (the photo was taken by her son, Kristian Graubaek, see above). 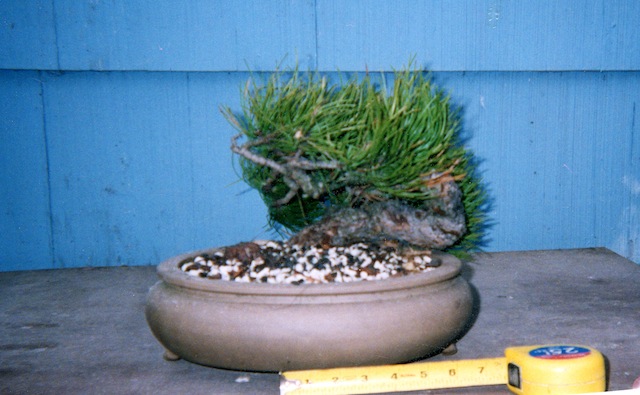 Yamadori Ponderosa Pine before. Tree after collection from Rocky Mountains (in a training pot when purchased in 2004). 7" (18cm). 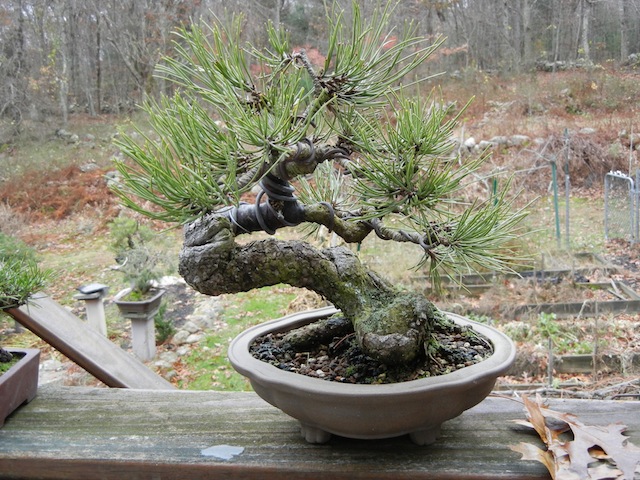 Yamadori Ponderosa Pine after. Tree after first styling. More refined styling to follow. Trunk will be tilted more to the right and apex brought back more to the left to make the tree more upright.

Often times with smaller yamadori trees, the foliage has only survived on the ends of long branches. There is a nice trunk with some deadwood but the foliage would have to be brought back close to it to make a pleasing tree. With shohin trees often an apex can be created using only one or two branches to accent a fantastic trunk. The trunk is a key focal point in the overall small composition. A trunk can be collected and foliage grafted down low – even one branch only in some cases – to create a shohin tree. Here in the Northeast of the US (as well as Canada) the best material for yamadori Bonsai is the American larch (larix laricina). It is a great candidate for Bonsai and shohin Bonsai. One can easily graft larch foliage lower on the tree – either approach or thread grafting work well.

Finally is what may be called by some as ‘Urbandori’ or collecting older dwarfed landscape shrubs and trees that can be cultivated as Shohin Bonsai. There are many abused trees in either commercial landscapes or neglected home plantings that get replaced over time. Some of these can be 50+ years old (and older) and can be used as interesting material for shohin Bonsai. The Japanese master that I spoke of earlier was able to secure a batch of very old Japanese yews that were going to be discarded from an area where a new government building was going to go up. He has these in boxes right now but they are full of potential for large Bonsai. They were over 100 years old. However, his eyes sparkled, he smiled and said that there may be a few shohin to be layered form them as well.

Written by: John Romano. "My first experience with plants was at 4 years old- helping my Italian Grandfather plant seeds and later pruning apple, pear and fig trees in the garden. This was my first 'crossing path' with trees. In 1975 I started to 'play' with Bonsai. It was more like creating a morgue for trees! After this first foray in futility, I stumbled upon some good books and finally found New England Bonsai Gardens (then in South Natick) and my passion was rooted. I've had many teachers over the years - in single courses and workshops - as well as more extensive learning relationships with Kenji Miyata at New England Bonsai Gardens and a short study period at Taisho en in Shizuoka, Japan with shohin Bonsai master, Nobuichi Urushibata. I have been teaching Bonsai classes and private students at New England Bonsai Gardens since 2000." - Please visit his website nebonsai.com for more information.