The hawthorn is plant that grows like a shrub in most cases and it takes many years to develop thick trunks. For Bonsai it has a number of good characteristics: small leaves, white flowers, red berries and a nice bark on old trees.

Additionally it is quite easy to achieve a fine ramification on hawthorns. Unfortunately it is not easy to dig up hawthorns and many specimen die after being collected. Because of this carefulness and experience are important if you want to collect an old hawthorn yourself.

In October 2008 this Hawthorn was acquired from Wolfgang Käflein, a well-known yamadori-hunter and seller in southern Germany. The tree has probably been collected in 2007 and had grown in the large container for a year. It was about 3' (90cm) tall and the trunk base had 6" (14cm) diameter. Wolfgang Käflein estimated the hawthorns age to be at least 60 – 80 years. 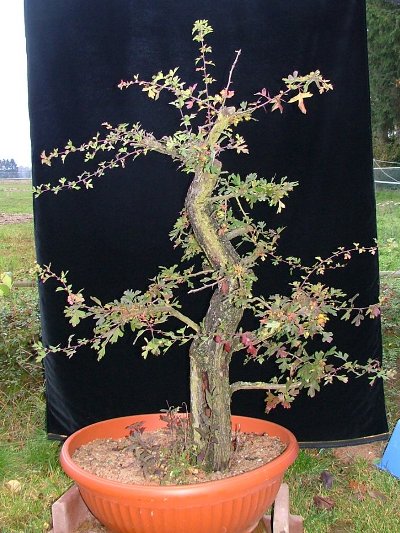 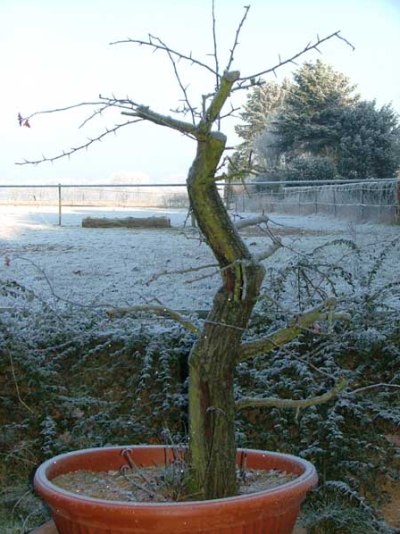 The hawthorn spend the winter outside. This picture was taken in December. 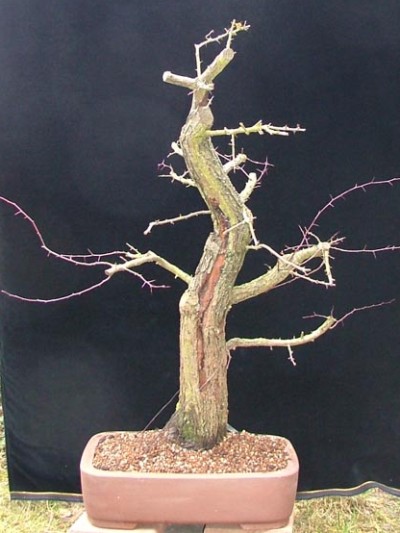 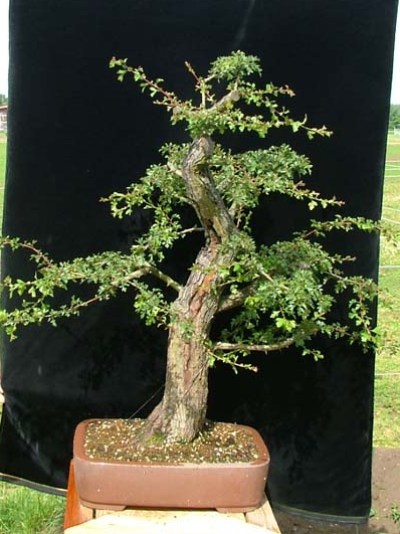 In March 2009 some branches were pruned and when I sawed off a branch with about 2" (6cm) diameter I could count more than 30 rings. This proved that Wolfgang's guess about the age had not been bad. Then the tree was repotted. The unglazed pot was just a temporary choice, it was the only one I had with the right measurements. The hawthorn had grown in grey clay and yellow sand and the roots were not well developed. All the old soil was washed off. The new soil mix consists of Akadama, pumice and a small amount of potting compost. A large root which had been sawed off by Wolfgang, couldn't be completely covered with soil, so I covered the end of the root with rubber from an old bicycle tube to prevent it from drying out. I hoped that the root would grow fine new roots on its lower side in the soil.

In spring the tree grew only very small dark leaves and no long shoots. It had to struggle with new root growth, but in May brighter green leaves emerged and the first longer shoots began to grow. The tree was placed in full sun then. In June the tree had recovered from repotting and looked quite healthy. 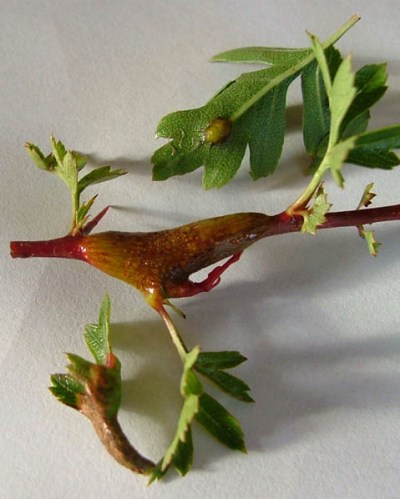 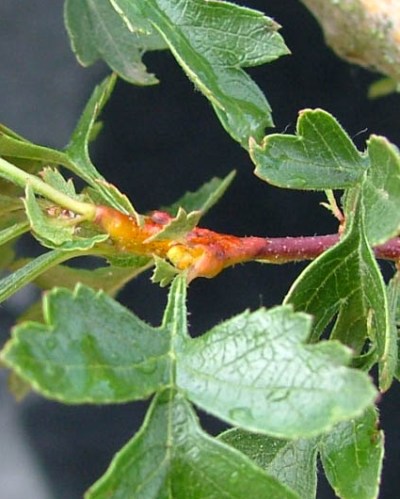 Unfortunately some deformed twigs showed and I found out that it was a hawthorn rust fungus. So I cut off those twigs and sprayed special fungicides several times. This solved the problem but the fungus can come back each year, so it is necessary to look carefully every summer. 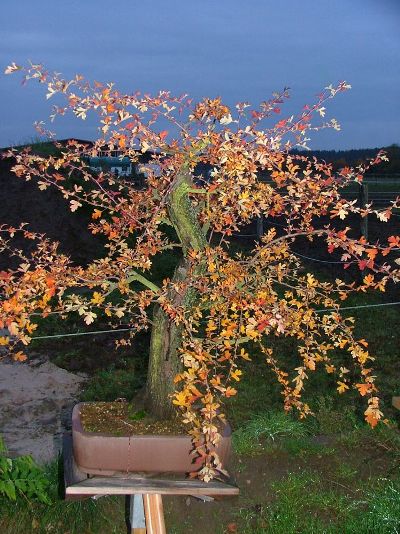 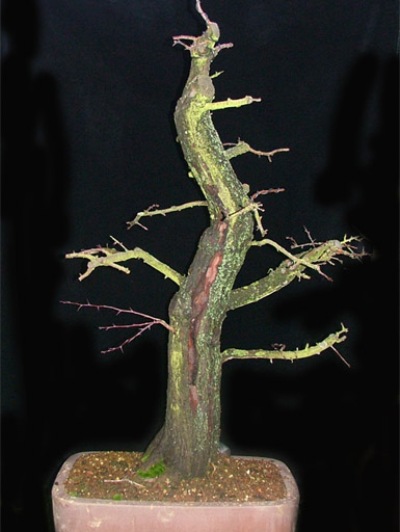 The hawthorn was allowed to grow freely until the leaves turned yellow and orange in late October. It has made shoots of more than 2' (60cm) length.

In November 2009, when the leaves had fallen, the hawthorn was pruned again. 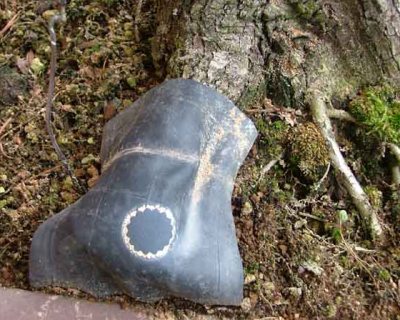 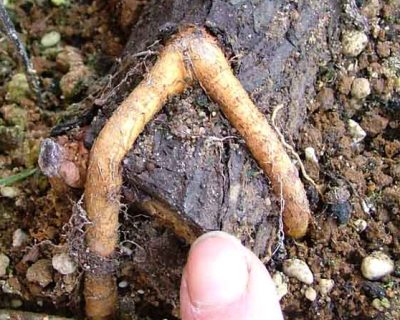 In March 2010 I lifted the bicycle tube rubber and discovered strong new roots even on the upper side of the root. Meanwhile those rubber pieces are a much used method to grow new roots! 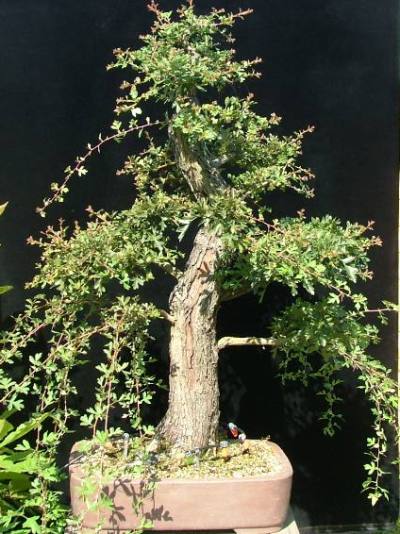 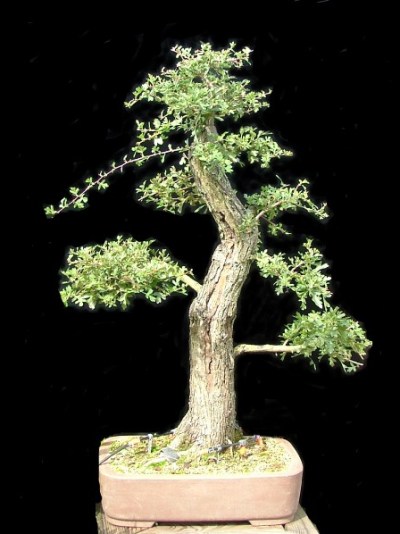 In 2010 the hawthorn was allowed to grow freely once more for the first part of the growing season. In July it had very long shoots again.

In August the shoots were trimmed and only a young shoot which came from the trunk in a good position to make a new branch was left untouched. 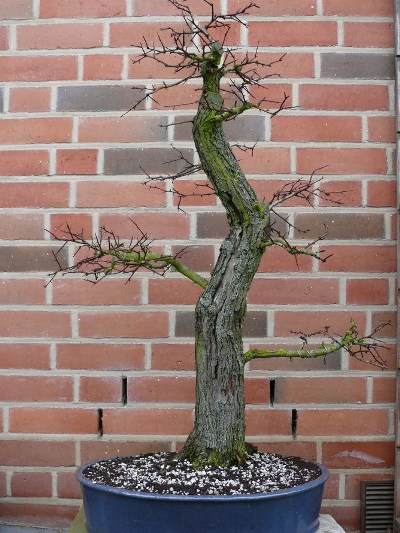 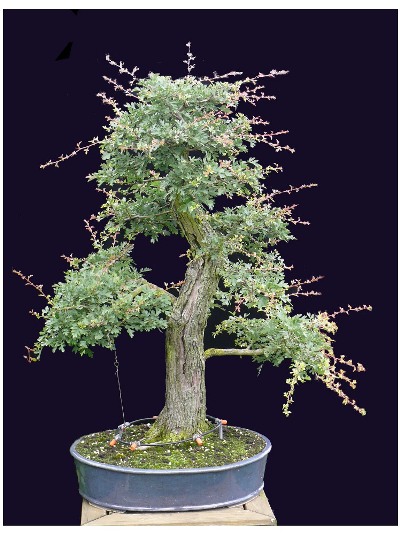 In March 2011 a new pot was chosen and the hawthorn was repotted again. The immature rootball needs to be worked on regularly to become compact and grow fine roots.

In 2011 the new shoots were trimmed several times and the ramification developed quite quickly. In August the progress is clearly visible. 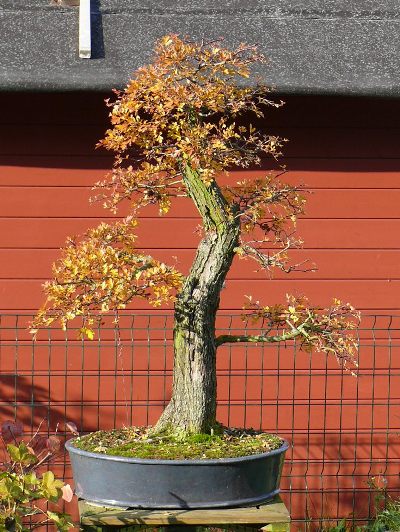 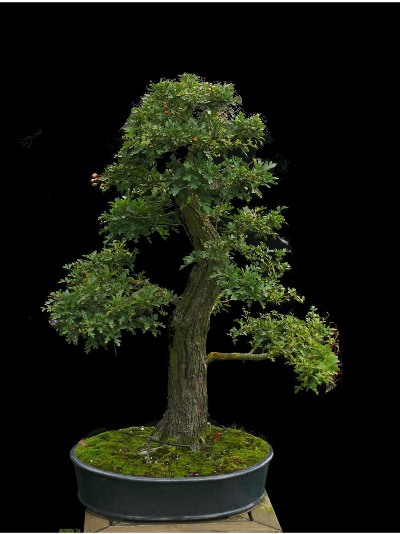 The leaves had a nice color in October 2011.

The first flowers and even a few fruit have grown in 2012. The large hawthorn has become a Bonsai and although the ramification is not sufficiently mature yet, the tree is already nice to look at.