Quercus serrata or Konara as it is known in Japan is native to China, Korea, and Japan. While not a popular species for Bonsai in the grand scheme of things, root-over-rock, bunjinji, and upright styles pop up occasionally at shows.

The main draw is the rough bark. Konara logs are prized for the production of Shitake mushrooms. In this article, I will point out some design principles and tricks that can be applied to many species used for Bonsai. 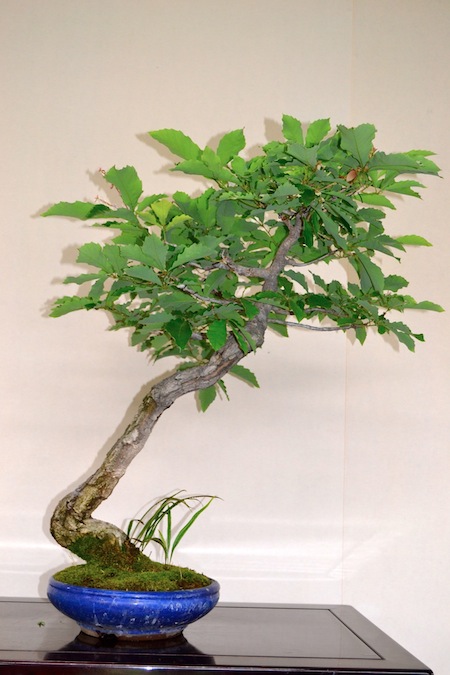 This is what the Oak Bonsai looked like when it arrived at Kouka-en. The original front had a bit of a flat presence as the previous owner was more concerned with making the base look fat. 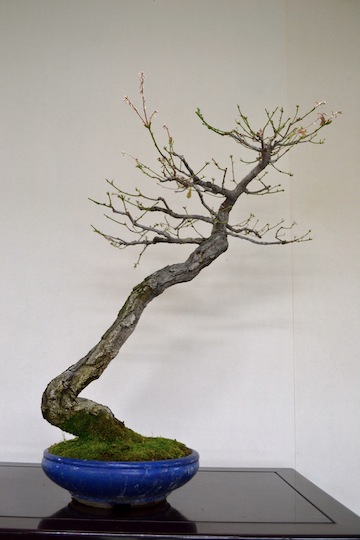 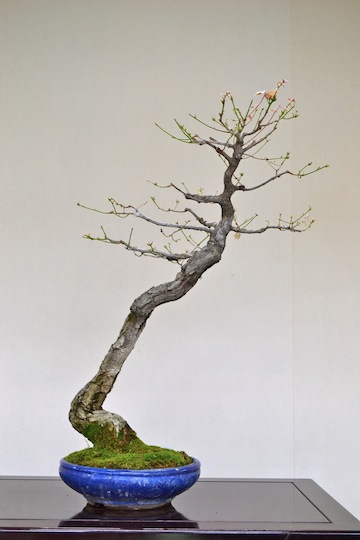 Right: The new front. Any branches too thick or long for their location on the tree were removed or shortened respectively. A few branches, namely the thick branch on the middle left of the canopy, were left as a compromise for balance. Notice how the new line of the trunk is more smooth and elegant. The previous front had a stronger feeling; this did not harmonize well with the graceful and light presence I wanted to portray. 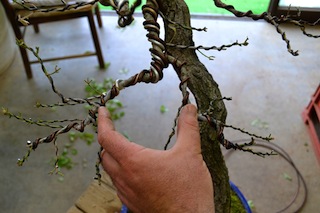 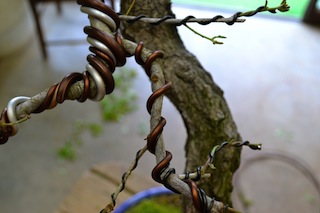 Left: Here the lowest branch on the back side of the tree needed to appear shorter and have less visual weight.

Right: By pulling the two branches closer together and putting some bends in the right places, less of the primary branch and secondary branches will be visible to the viewer. The tertiary (smallest) branches will be fanned out and serve as the backdrop to the composition. Before pulling the branches together, I checked to make sure the movement I put into the branch would look right. After a little stronger bend was made. When the distance between these two branches is decreased, the spacing will be just right. 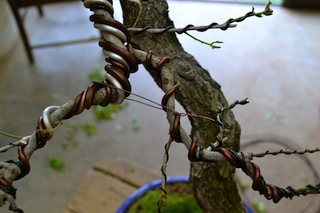 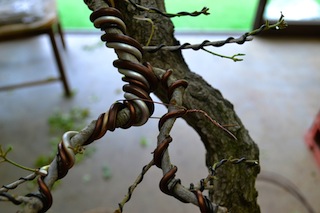 Left: In the image on the right, you see the guy wire placed.

Right: Had I bent the branch after applying the guy wire, I would have had less freedom to bend exactly where I wanted. Pre-planning of this nature is very important when wiring any tree. Wiring is a lot like chess. The bend here may appear a bit extreme, but after the wire is removed from this oak, the branches will “rebound” some and a more desirable angle will naturally appear. 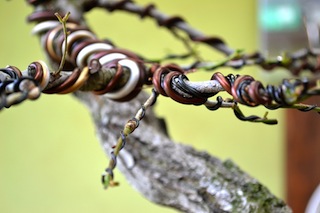 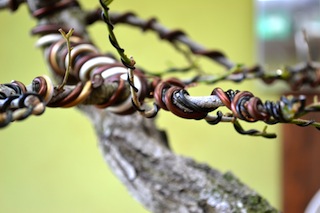 Left: This is a wonderful technique I use all the time when Wiring bonsai trees. The long shoot pointing downwards emerges from the bottom of the main branch. You may think to cut this off, but deciduous trees need sinuous lines. Flat pads are boring and unnatural.

Right: First, make a bend vertically past the horizontal plane you want the branch to end up at. We often bend branches downwards first then up to lower branches that have naturally grown upwards due to phototropism. In this case, we do the opposite. 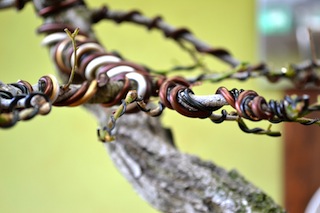 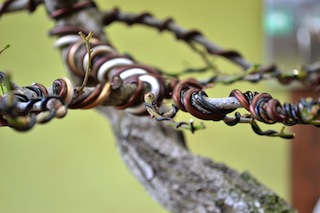 Right: Third, give the branch a little lateral movement so the branch does not appear like a spiral from the front. Finally, bend the tip slightly upwards to match the visual plane of the neighboring fine branches. 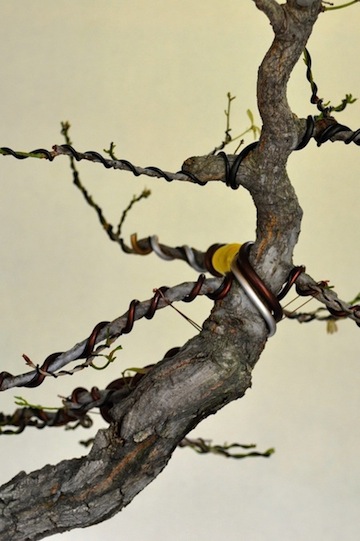 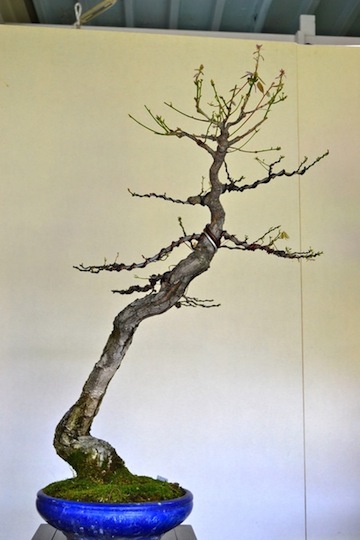 Left: A piece of yellow tape was placed at the base of this thick rear branch. Aside from the thick branch above it, this is the greatest flaw in the tree.

Right: By applying multiple heavy wires and bending this branch down and to the right, the primary and secondary branches disappear from the viewer. 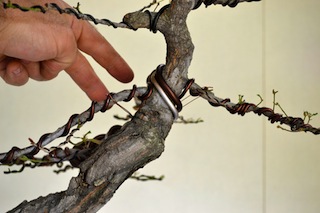 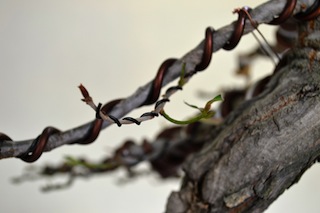 Left: The tertiary branches were then fanned out to frame the back of the tree. They are blurry, but I point to the two important branches here.

Right: While wiring, I tried to match the natural curves of new shoots. When the new flush of leaves and shoots emerges in the coming months, attention to this detail will pay off as a the whole canopy will have a more uniform rhythm. 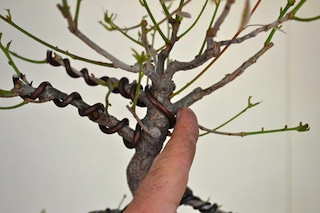 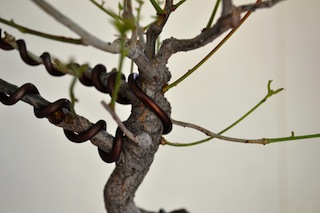 Left: The location of this branch and angle of inclination make it impossible to use in the design.

Right: There are also two younger shoots close by to use. 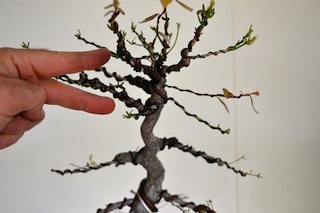 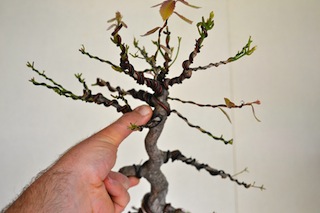 Left: These two branches are also too thick and have poor angles of inclination, but I felt they were necessary for the design.

Right: My solution was to guy wire one of the branches thereby dropping the whole left side of the apex. 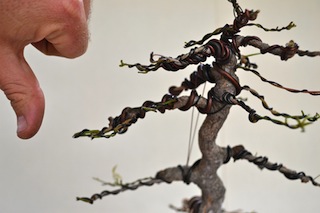 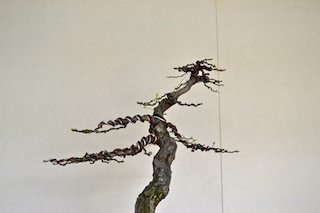 Left: This helped, but the lower of the two branches (level with the tip of my thumb) ended up with a poor bend. A bend of this nature makes the branch appear young and weak. This branch should be removed eventually anyway, so I moved on.

Right: Here is a view from the left side of the final product. Sometimes, we are tempted to have a single shoot point upwards at the apex of a bonsai. This always makes the tree look younger. Old trees have a rounded, if not almost flat top. By bending the apical shoots forward, the feeling of age is present throughout the tree. 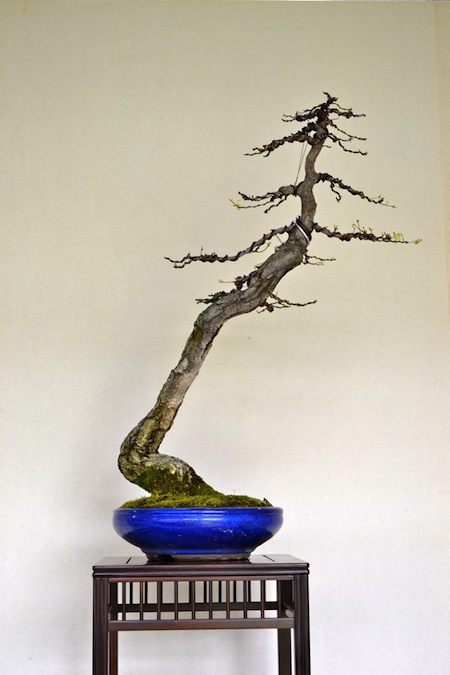 Here is the final product for this stage of the bonsai’s development. Some of the branch angles may appear extreme in two dimensions. As stated before however, the older branches will spring back some. Also, the leaves of this species are fairly large. In order to leave room for future finer ramification above and below the framework set during this styling, some bends will appear to be not enough or too much of a change.

With most bonsai stylings, branches on the side against the direction of movement are more compact and tilted just slightly more downward. Branches on the side going with the movement are styled to appear slightly longer and the pad angles closer to flat or a little high. Branches in the rear of the tree have pads tilted slightly down to increase the feeling of depth. Read more about styling and shaping Bonsai trees.

Written by: Owen Reich - "While studying Horticulture at The University of Georgia, Owen had his first exposure to bonsai; a classmate pulled out a Kokofu ten book one day. That sealed the deal. The decision to formally study in Japan was made. With the help of Bjorn Bjorholm, introductions were made to Keiichi Fujikawa; a second generation bonsai artist who apprenticed at Mansai-en under the late Saburo Kato". Please visit his website bonsaiunearthed.com for more information!