The creation of a Sacred Wood Bonsai

This species is destined to mark a deep and poetic path in the Latin American Bonsai scene. The tree species is known for its silky aesthetic of delicate, suggestive and contorted forms of indomitable presence. Article written by Nacho Marin.

About the Sacred Wood

Endemic to Latin America, from Mexico to Ecuador.

The tree has a a maximum height of 10m, and is considered robust and elegant at the same time. It has pinnate leaves, of up to 275mm long and 135mm wide, with tiny white flowers in small clusters 80mm in diameter. The trunk and branches are covered with a silky looking and lustrous bark, that offers it a gray and slightly silvery- appearance, that with maturity turns flaky and bronce colored, sharing these two textures on the same tree. 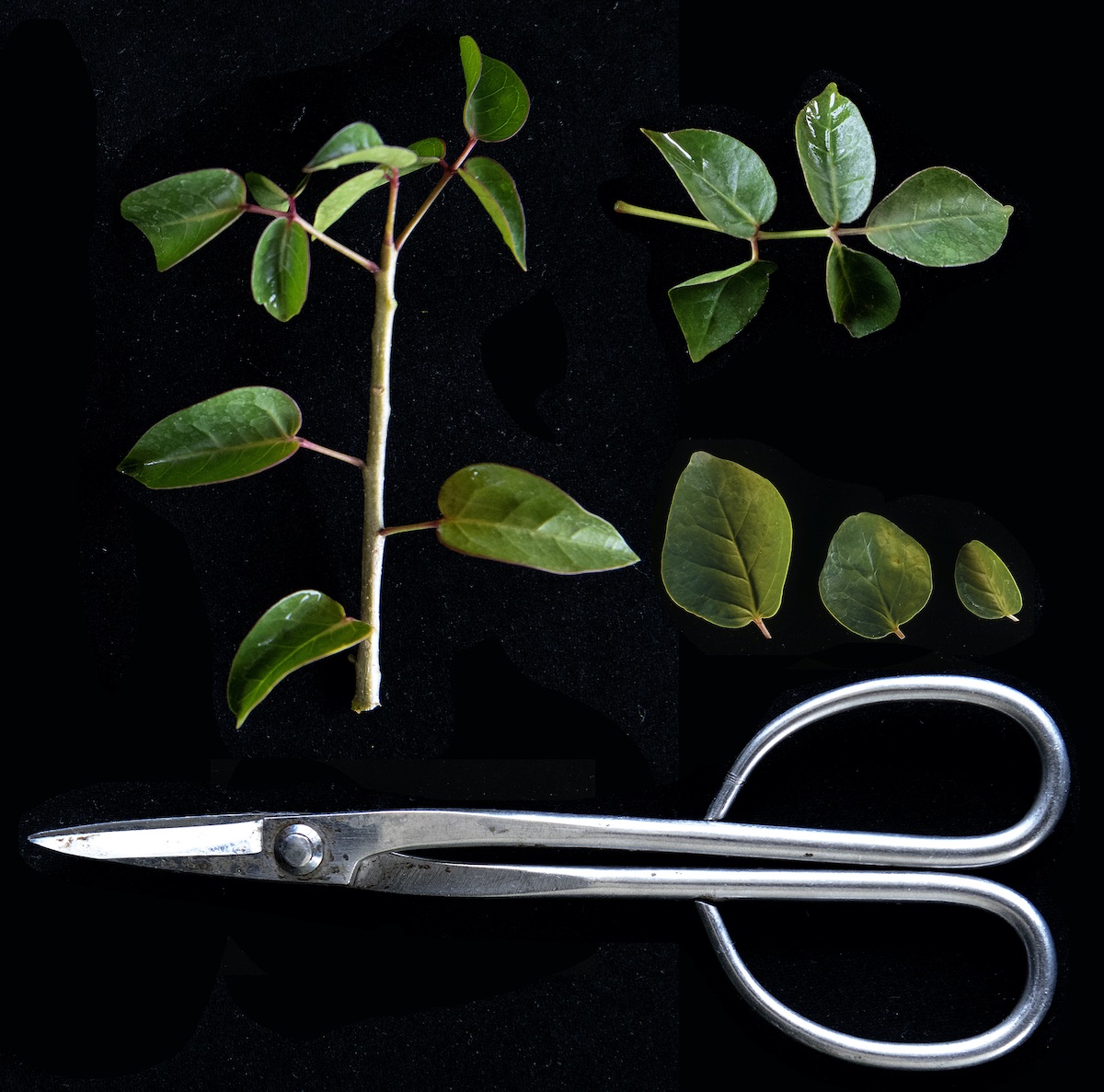 The leaves of a Sacred wood. 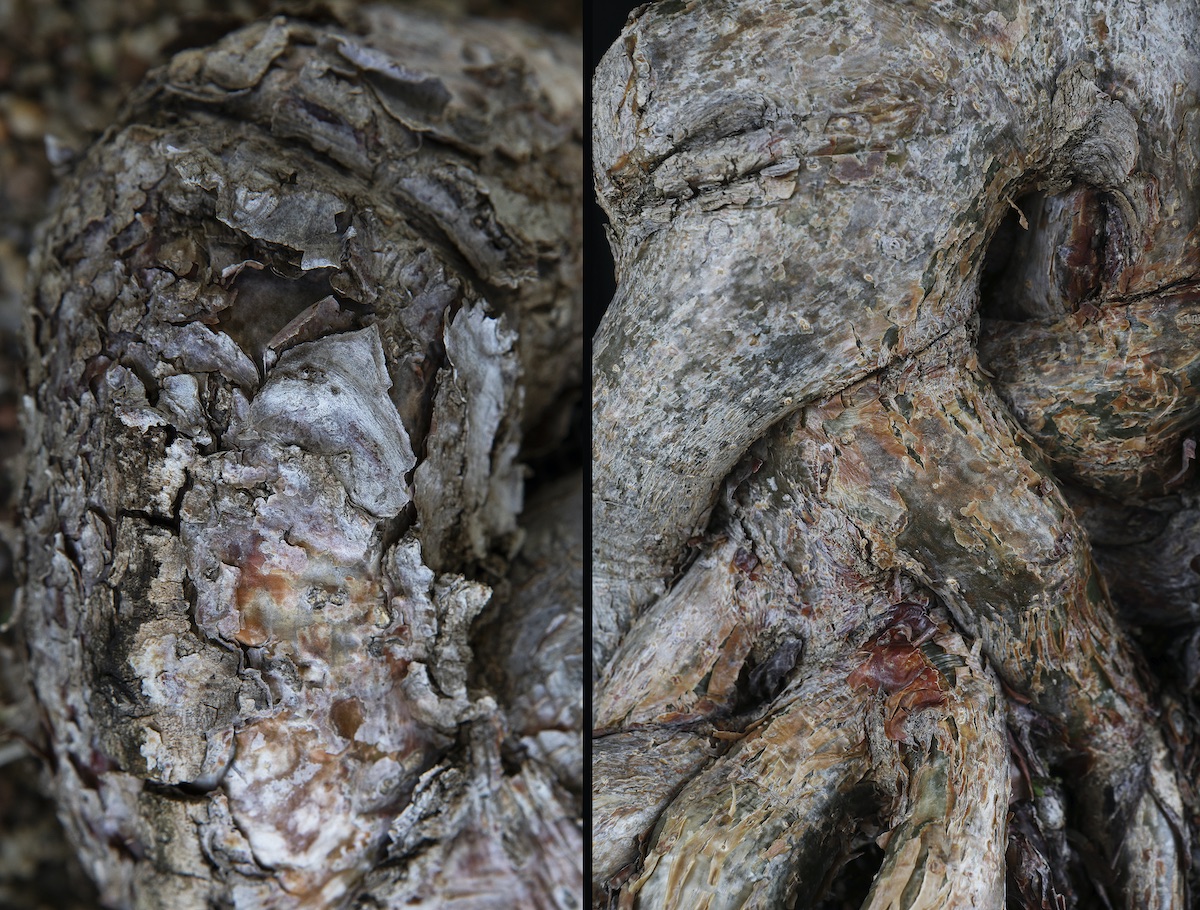 Textures on the bark.

Its compound leaves spring from the branches only after three to five internodes, before that it sprouts as a single folio, which is perfect for Bonsai, its leafs reduce to ¼ its size, it also supports heavy pruning and also during structural or stylistic pruning the tree will yield new and abundant alternate budding.

If the artist needs to make a large cut to remove some part of the tree, it will heal and be covered by an imperceptible callous with vigorous growth.

As a Bonsai it will bloom.

Its cultivation is simple, the soil should be inert, use only only pebbles or river stones, under normal circumstances fertilizing may be either chemical or organic, they are very resilient to attacks from insects due to its natural resin which provide it with protection and its characteristic odor.

It is feasible to cut or trim any required roots without putting at risk the tree, even without leaving the fine feeding roots.

It has a very high quality wood for dead wood, due its high resin content that preserve it, thus behaving in a similar manner to conifers.

It has a vigorous and rapid growth, ideal for using the technique of pruning for its design. 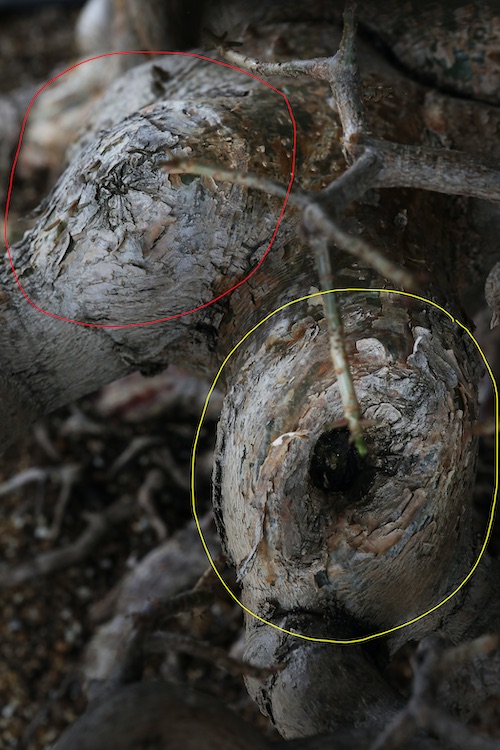 New growth from a previous cut.

The methods of propagation are diverse. You may use cuttings, air layering is always quite successful or you may propagate from seed.

Wiring is the most commonly used technique for styling as in any other bonsai, as well as the use of fixed or adjustable tensioners, its branches are glassy and brittle, thus it is recommended that wiring be applied to its young and non-lignified branches and after that by using tensioners and pruning and growth to achieve a more natural appearance. 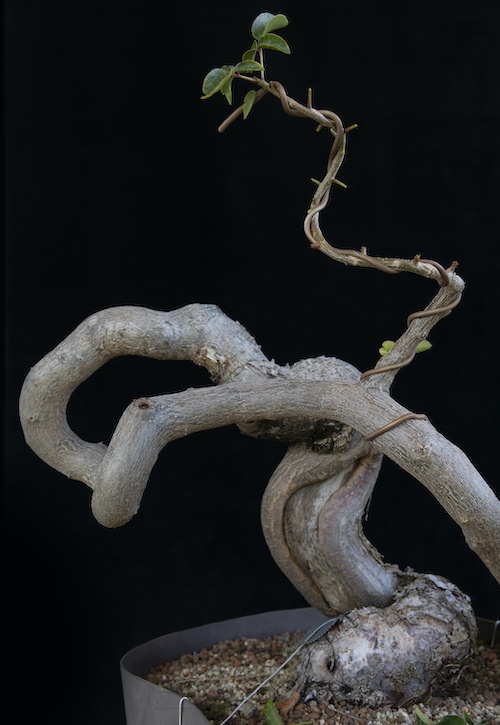 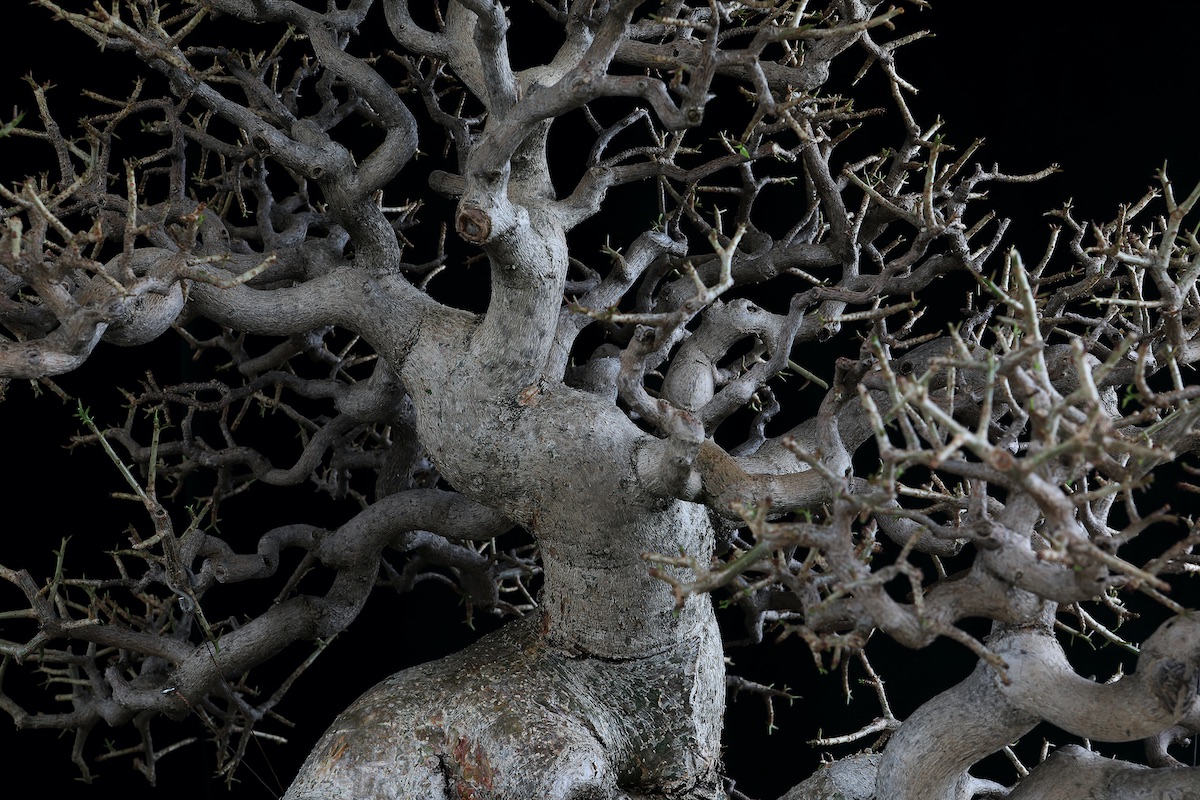 Ramification detail on the finished tree.

How this tree was created

Its creation began about 9 years ago, when it was purchased from a nursery as an ornamental plant, then it had a useful segment not greater than 10" (25cm) tall.

The second interesting part of the trunk, was rooted and placed between the lateral roots of what I considered as the ideal front of the trunk base of the composition, in the manner of the first branch and not a second trunk.

The new ensemble was then planted in a tall and narrow pot that forced a trunk to be developed with the roots that grew within him, thus trapping in a definite matter what would become the first branch. The development of the new crown was then initiated, with the new shoots that sprouted from what at that moment would be the final trunk.

The next step was to plant it in a slightly larger pot in order to help us repeat the process gradually enabling us to discover the roots, thus allowing us to shape our new trunk and future nebari. The growth proportion that I´m presenting, was relative to ¼ in width and height of the initial section as compared to the final size of the bonsai shown. 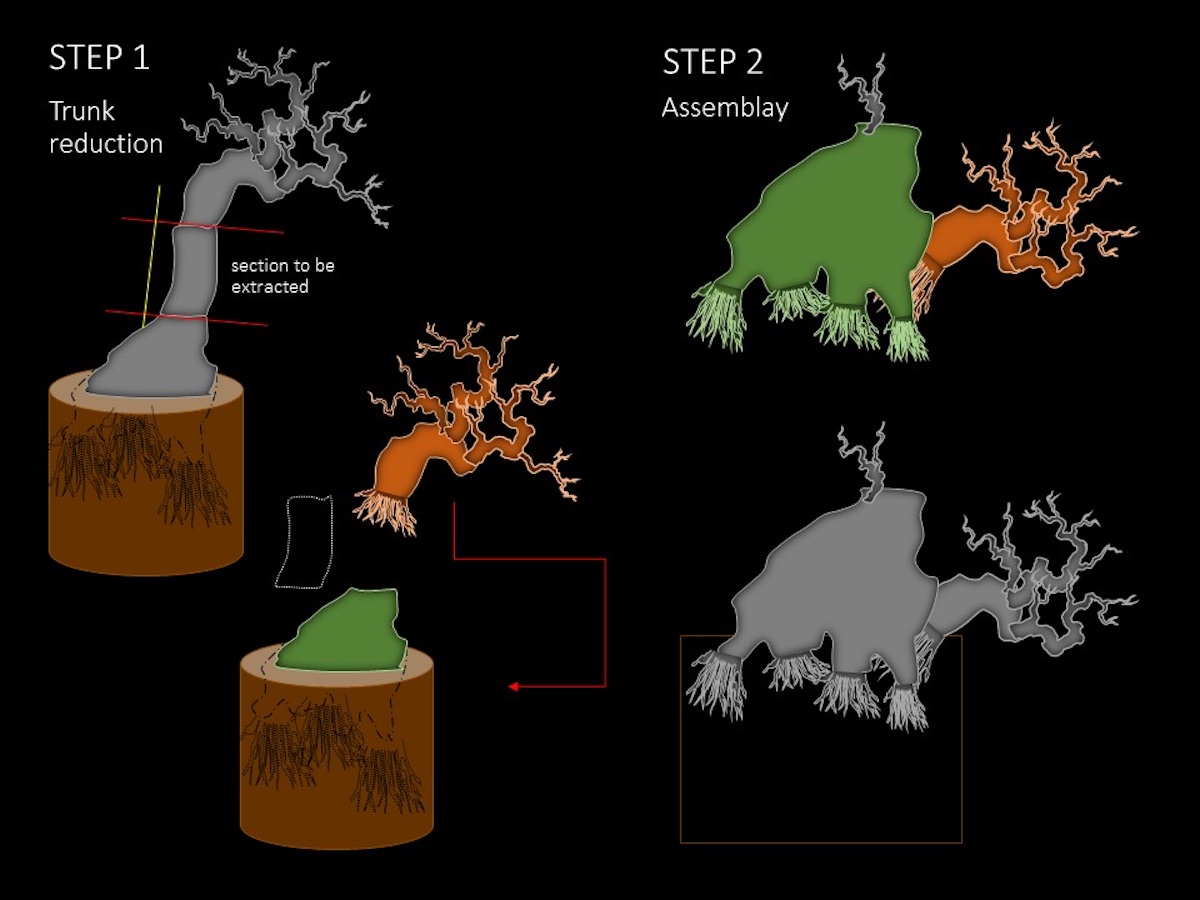 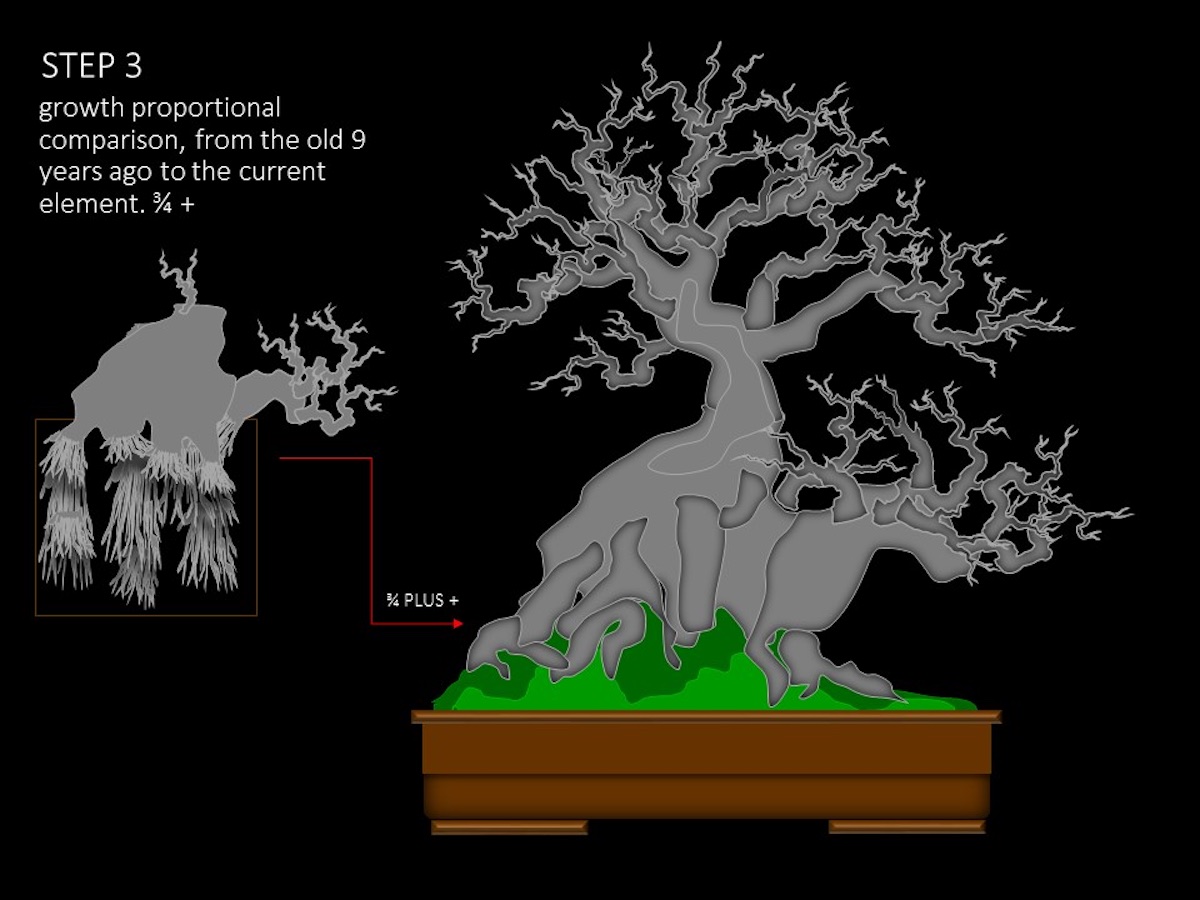 This design allegorical of a “Moyogi”, with its rested and calm appearance, gives stability to its titanic presence, the strong differential between the first and second branch accelerate the dynamics of this massive tree of heavy beauty. 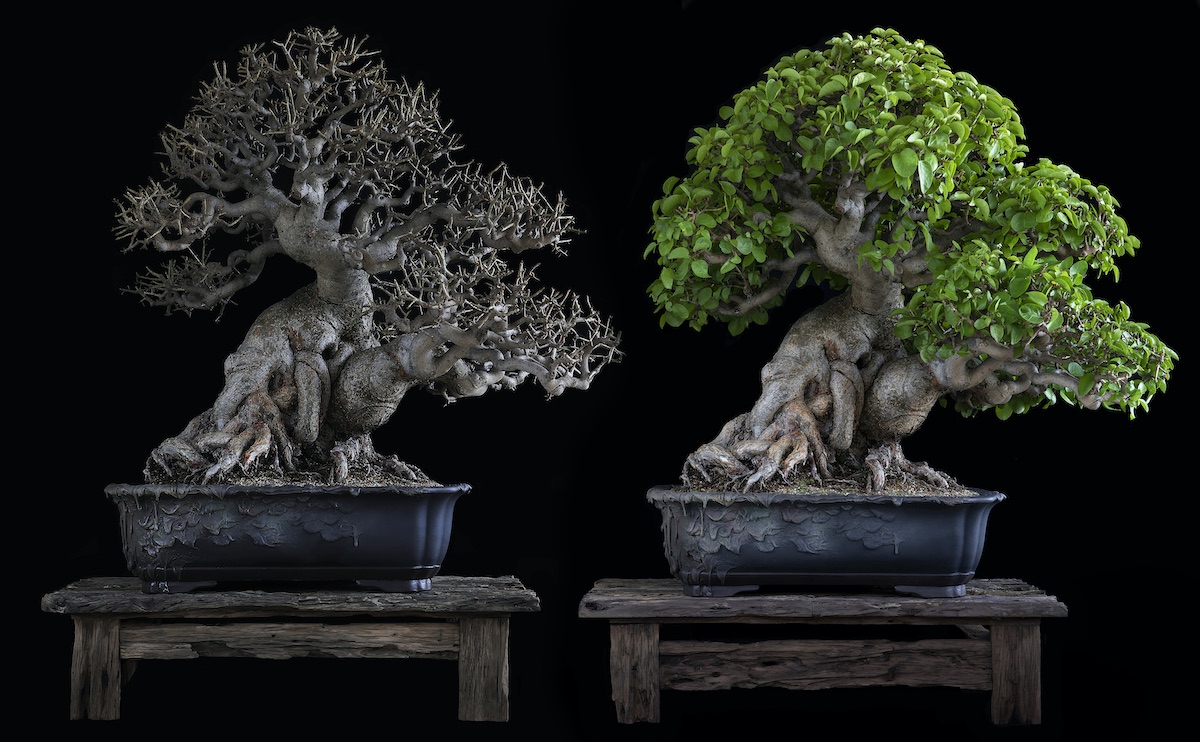 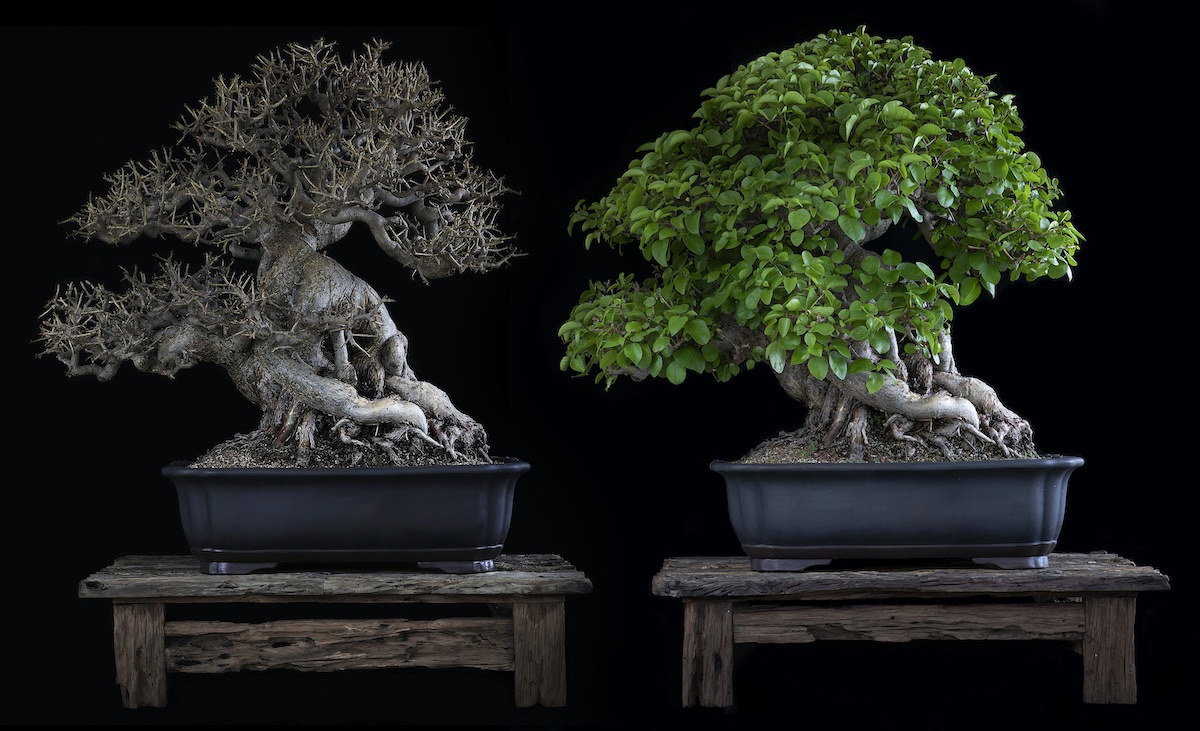 Back of the Sacred Wood Bonsai tree.

In the end as a whole, it catches the drama of its morbid and rounded volumes, placing textures of similar features in the pot as a visual counterweight thus bringing harmony to the entire composition. The changes made to the vase (pot) of Chinese origins were done using epoxy and acrylic paints. 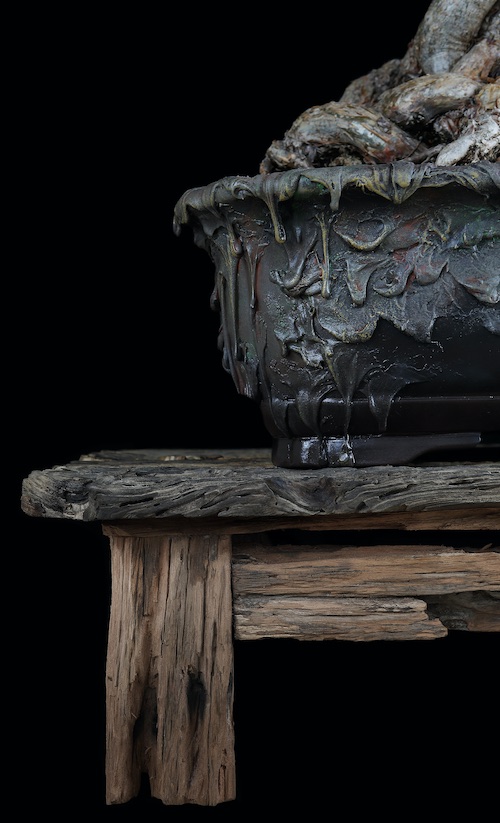 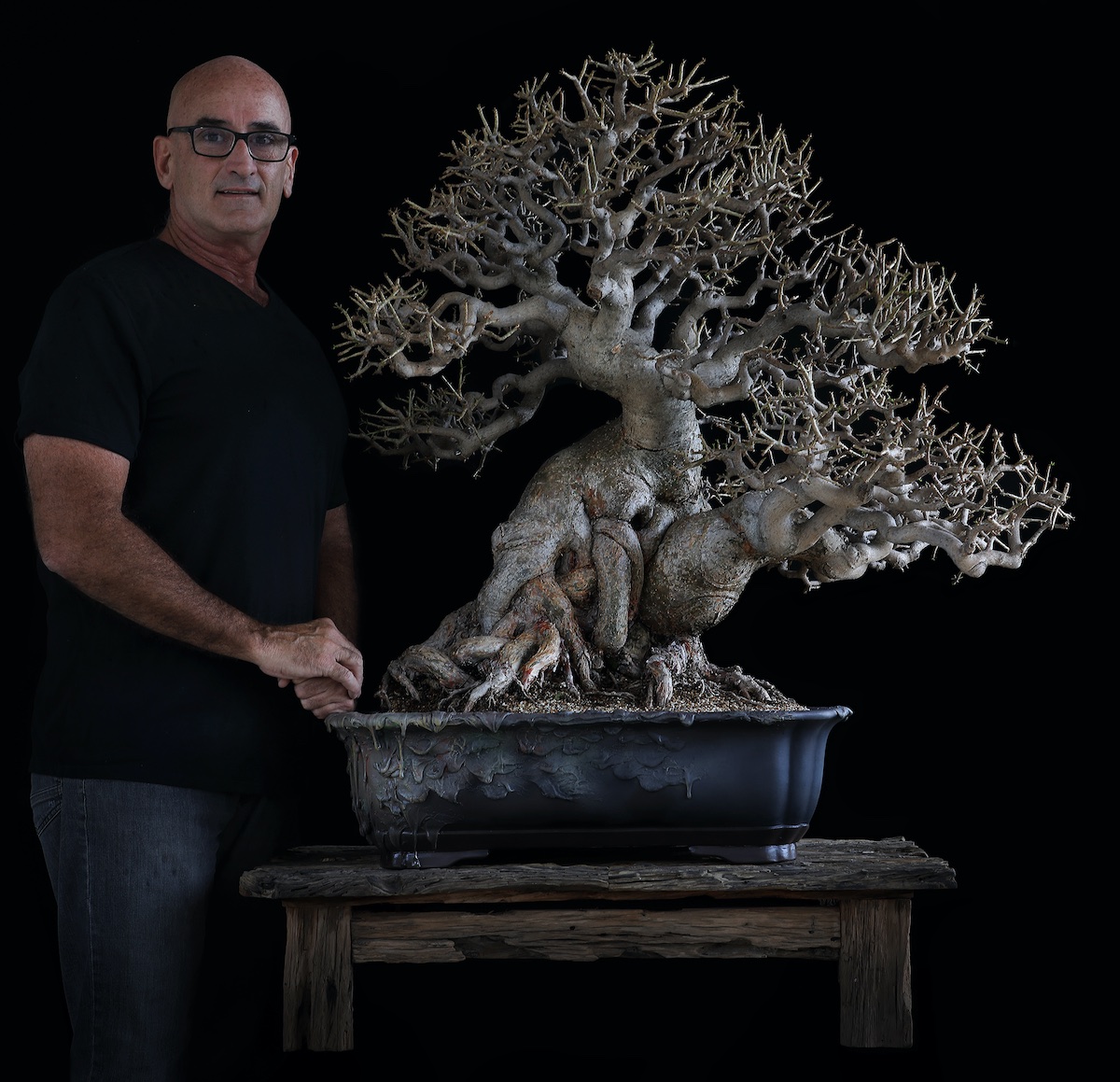