The eldest of three sons, William N. Valavanis was born on September 3, 1951 in Waukegan, Illinois, to Nicholas and Irene Valavanis, first generation Greek-Americans. Bill displayed an early interest in nature that was stimulated by his mother’s love and skill in gardening. 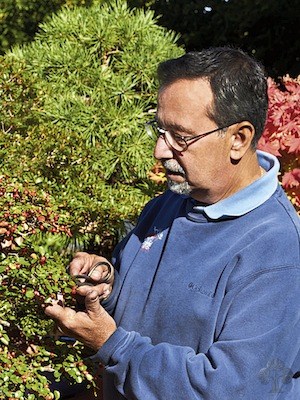 In the early 1960s, his mother and her gardening buddy went to a Bonsai demonstration where they each received a free Japanese yew to “try for bonsai”. Bill was “dragged along” for the trip, and this began his interest in bonsai. He eagerly sought information and tried to shape plants into primitive bonsai. During an exploratory nature hike along the shore of Lake Michigan, he once collected hundreds of small “pine seedlings” and individually planted them. Later he learned that his “pine seedlings” were actually pieces of club moss! In 1966 the Valavanis family moved to Charleston, West Virginia. Bill explored the beautiful hillsides and came home with plants for Bonsai and numerous cases of poison ivy.

In 1967, at the age of sixteen, he began lecturing to garden clubs in the Charleston area. Encouraged to sell and teach bonsai, his business “The House Of bonsai” was established. The Valavanis family moved to Rochester, New York, in 1968, along with numerous Bonsai and pets. Bill still showed the unusual “single interest in bonsai,” despite the advice of others to take a “broader view of life” and seek other interests. His parents, however, continued to stimulate and encourage him to pursue his interest in bonsai.

Bill graduated from the State University Of New York at Farmingdale, Long Island, in 1971, majoring in Ornamental Horticulture. He became an active member and Director of the Bonsai Society Of Greater New York and attended classes with Yuji Yoshimura in Tarrytown, New York on weekends. While still at college his first mail order catalog was published in 1970 listing numerous Bonsai starter stock and chrysanthemums for bonsai.

During the summer of 1970, encouraged by Lynn Perry, who helped make arrangements, Bill went to Japan to study Bonsai with Kyuzo Murata at Kyuka-en Bonsai Garden in Omiya, Japan. He also began studying saikei with Toshio Kawamoto at the Nippon bonsai-Saikei Institute in Tokyo.

After returning home he sold most of his Bonsai collection to finance a longer apprenticeship in Japan. From 1971 to 1972 Bill studied with Kakutaro Komuro at Shoto-en Bonsai Garden in Omiya, Japan. He continued his studies with Toshio Kawamoto and took classes on Bonsai chrysanthemums with Tameji Nakajima. To learn more about Japanese design and line, he studied the “Shofu School” of Ikebana receiving a master’s teaching certificate.

Returning home from Japan he began teaching regular Bonsai classes in Rochester and traveling throughout the United States and Canada teaching classical Bonsai art. In 1974, he enrolled at Cornell University majoring in Floriculture and Ornamental Horticulture, and still continued his business and teaching activities in Rochester.

After graduation in 1976 he lived, studied and taught Bonsai courses with Yuji Yoshimura at the Yoshimura School Of Bonsai in Briarcliff Manor, New York. A thirty year study and relationship with Mr. Yoshimura has provided him with the drive, enthusiasm and knowledge to promote classical Bonsai art.

In 1978, he was Editor for one year of The Bonsai Bulletin, published by The Bonsai Society Of Greater New York, as well as a Director of the organization.

In 1978, he changed the name of his business from The House Of Bonsai to The International Bonsai Arboretum, to reflect his new goals and ambitions. His life was now dedicated to the promotion of the international artistic and horticultural expression of classical Bonsai art through propagation and education throughout the world. Bill has introduced, propagated and popularized many plants including yatsubusa, dwarf and unusual cultivars of pine, maple, elm, quince and porcelain berry.

In order to reach the greatest number of English speaking Bonsai fanciers, he began publishing International Bonsai in 1979, now reaching over fifty countries. His magazine sponsored thirty symposia in Rochester which attracted people from around the world because of the educational programs, instructors and organization. He has authored many articles which have been printed in English, Japanese and European publications in addition to The Encyclopedia Of Classical Bonsai Art, Volumes I & II, which are now out of print. He has made TV appearances in North America, Japan, Korea, Italy and Australia.

In 1987 Bill married Diane McAleer from Montreal, Canada, and they have two sons, Nicholas and Christopher. Together they moved The International Bonsai Arboretum to a larger location in the Rochester area where they continue to offer a full curriculum of classical Bonsai art classes. He has made well over fifty trips to Japan to study and lead Bonsai tours. His teaching travels have covered England, South America, China, Indonesia, Japan, Taiwan, Belgium, Italy, Australia as well as North America. In April 2006 the Chinese government invited him, a Greek American to travel to China to teach Japanese Bonsai art, which the Chinese invented! In 2007 he presented a two day demonstration at the Ginkgo Award Exhibition in Belgium.

He assisted in establishing The Bonsai Society Of Upstate New York in the Rochester area which still remains one of the most active and distinguished organizations on the east coast. A few years ago the organization celebrated their 30th anniversary and presented Bill with a “Lifetime Achievement Award” for his 40 years of dedication and accomplishments to the art of bonsai. In 2003 the officers and directors of the American Bonsai Society also presented him with the Distinguished Lifetime Achievement Award in recognition and gratitude for outstanding contributions as scholar, author, publisher, creative artist, teacher, symposium organizer, tour guide and international ambassador of good will, and for many years of service dedication and friendship to the American Bonsai Society.

His Bonsai masterpieces are often featured in English and foreign Bonsai books and periodicals, often on covers. He continues to share his knowledge with non-profit organizations and is a Director of the National Bonsai Foundation. In the Rochester area Bill is on the steering committee of GardenScape and produces award winning Bonsai garden displays each spring for their garden show.

Scenic viewing stones, Bonsai reference books and lapel pins are also passions of Bill and he has contributed to their understanding and promotion around the world.

He freely shares his 50 years of dedicated Bonsai passion, study, experiences and discoveries with students and serious Bonsai fanciers through International Bonsai and his educational Bonsai programs.

The garden of William Valavanis

Some of William Valavanis's Bonsai trees 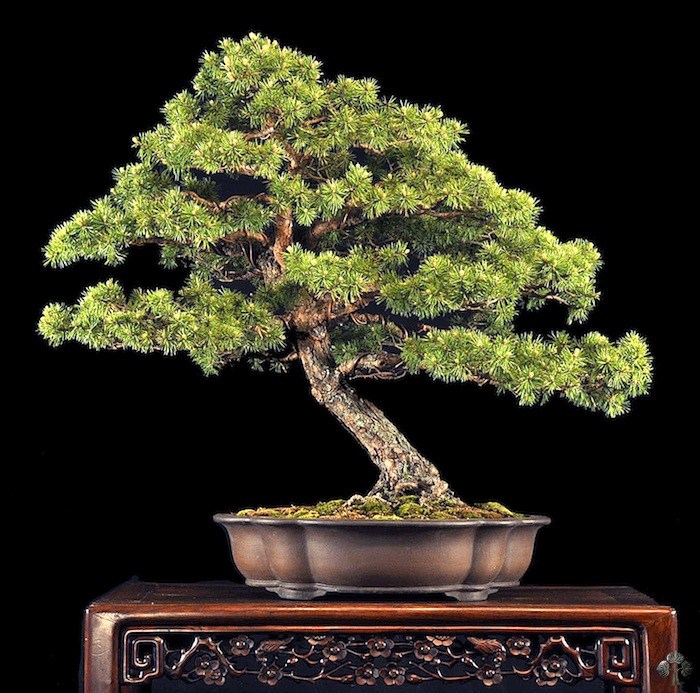 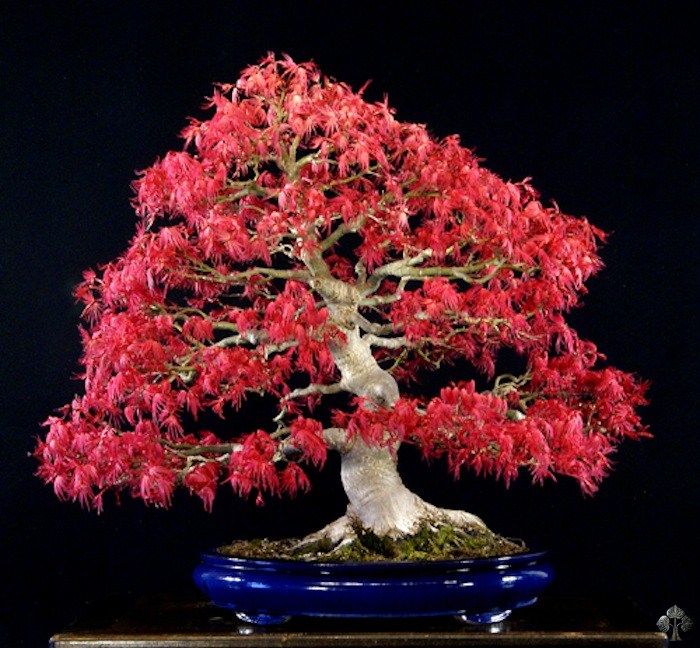 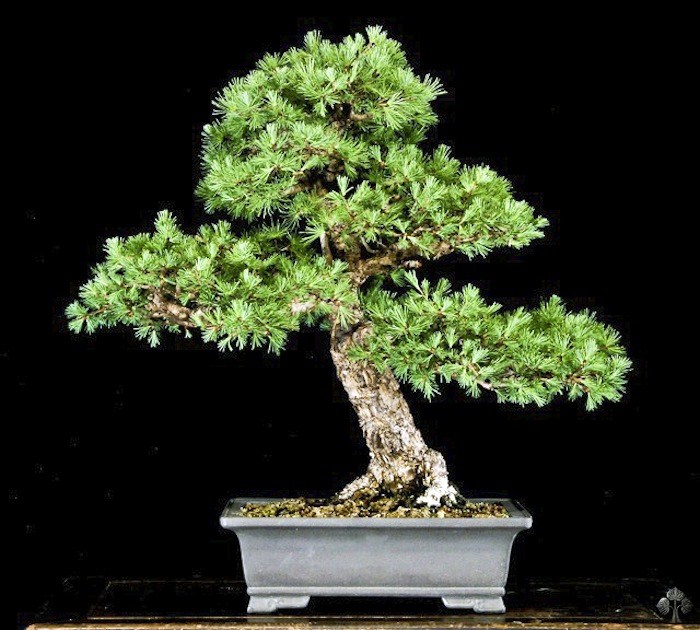