生け花 - Ikebana (literally "giving life to flowers") is the Japanese art of flower arrangement, in which the arrangement brings nature and humanity closer together.

The shapes, forms and colors of the flowers are very important; but unlike western customs, emphasis is put on the flowers’ stems and leaves. Ikebana is rooted in Chinese and Buddhist philosophy. Central to Ikebana are the essences of harmony, minimalism, seasons, symbolism and meaning of the arrangement. A successful arrangement incorporates these concepts as visible in the color combination, shape, flow and meaning of the plants.

Ikebana developed from Buddhist flower offering rituals dating back to the 6th century. Initially these offerings were informal, but it developed in Japan to more prescribed rituals in which flowers were presented in containers around the 10th century. Ikebana is also known as "Kado" (literally translated as the way of flowers), which is one of tree classical Japanese arts, along with Chado (tea cermony) and Kodo (incense).

In the 15th century these flower arrangements took off as an art form independent of its religious origins, originating in Kyoto (the Ikenobo School). It is the only school name not ending in "ryu" as it is considered the original school. 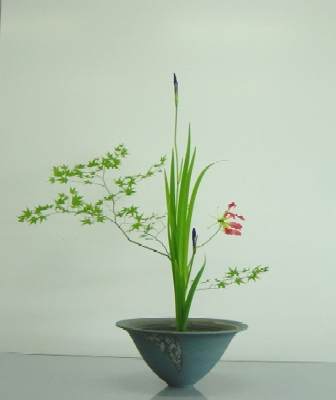 Ikebana developed through time from minimalistic arrangements to more contemporary and decorative designs. The first style dates back to the beginning of Ikebana and is called Kuge; it consisted of a tall upright placed stem, accompanied by two smaller stems. Other styles include:
Rikka, standing flowers as a Buddhist expression of beauty and the arranged ways of nature.
Chabana, rustic simplicity and minimalism, often used for tea ceremonies.
Seika / Shoka, consisting of three branches representing heaven (ten), earth (chi) and man (jin).
Jiyuka, creative design, not confined to flowers. 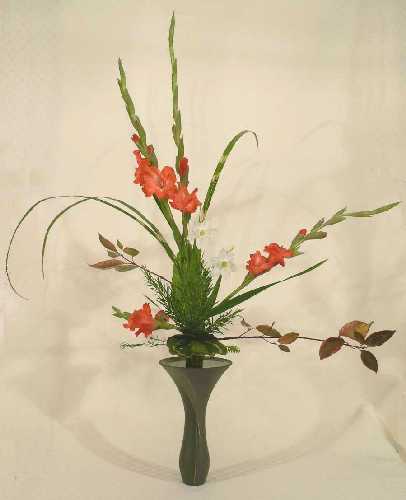 Similar to Bonsai, the vessel used in the Ikebana display is a crucial component. The selection of a vessel depends primarily on the selected plants, making sure these can be placed properly and can thrive. The vessel can be made of glass, clay or copper, but also of natural materials including bamboo or pieces of wood.