錦鯉 - Nishikigoi, often called Koi fish or Japanese carp, are fish with colors and patches raised and kept for appreciation. The carp originates from China and was brought to Japan by means of gifts.

Its first Japanese mention dates back to 71AD (of Koi held by the presumed legendary Emperor Keikō). It took until the 19th century before Koi mutated and got colored however, a prerequisite for contemporary Nishikigoi appreciation (originally Koi were held in irrigation basins above rice fields as a source of food).

Nishikigoi are temperate freshwater fish that can adept to water temperatures between 47°F to 95°F (8°C and 35°C). A water temperature of around 70°F (21°C) is optimal however. Koi ponds need to be at least a meter deep to serve as a buffer against both hot and cold temperatures. Though the carp are omnivorous, balanced feeds are important to bring out the brightest colors and achieve well developed Koi. As the carp cannot store food, regular feeding is important (sometimes up to six times daily). The average Koi fish has a lifespan of 70 years but some grow much older (the oldest Koi was reputed to have lived 226 years). 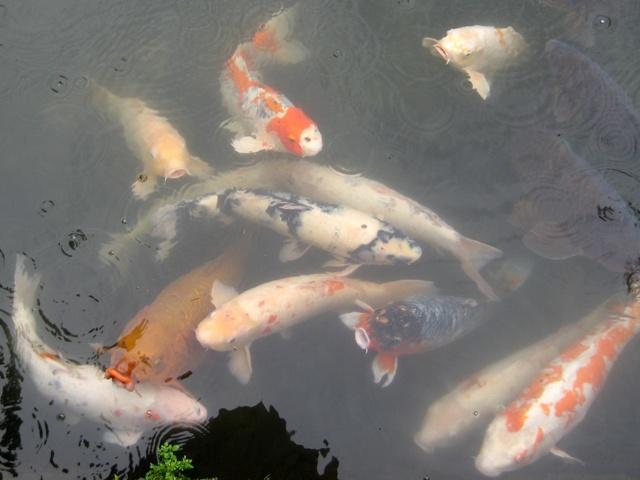 Currently over eighty different varieties of Nishikigoi exist, with 26 fixed varieties (as listed below). The most popular category is the Gosanke, consisting of the Kohaku, Taisho Sanshoku, and Showa Sanshoku varieties. New varieties are still actively developed.

The beauty of Koi is measured by looking at:
Shape: a perfect Koi has a spindle-shape body with its head, body and tail balanced.
Color: brightness and contrast of colors.
Pattern: the optimal pattern differs greatly per variety but is thought to the most important aspect of Koi appreciation.