The ginkgo is a deciduous tree with fan shaped leaves and a columnar silhouette in younger years, getting broader with age. The tree is indigenous to China and is considered a living fossil, dating back 270 million years.

Place the ginkgo outside all year round. It prefers a sunny position but young trees are better placed in semi-shade. The ginkgo can endure frost but when it is planted in a bonsai pot the rootball should be protected from very low temperatures. In spring the new leaves appear quite late and in most cases then there will be no night frost anymore. But if the weather broadcast should announce the possibility of night frosts, better protect ginkgo bonsai when they have already produced leaves, to avoid severe damages.

Ginkgos need much water from spring to autumn but must not be overwatered. Keep them slightly moist in winter. Calcareous water is no problem for the ginkgo. Continue reading about watering Bonsai trees.

New long shoots should be shortened to one or two leaves when five or six have grown. Larger cut wounds don't heal well. Use cut paste and, if possible, avoid producing large wounds. Ginkgo trees can be wired at any time of the year. The branches are quite flexible. Take care not to damage the soft bark of the branches and twigs with the wire. Continue reading about pruning Bonsai trees.

Younger trees can be repotted every year in spring, older ones every two to five years. Don't prune the roots too heavily. A standard soil mix is fine, but it must be well-draining. The ginkgo tolerates a wide range of acidic to alkaline soils, the pH value can even be up to 10. Continue reading about repotting Bonsai trees.

The ginkgo tree can be propagated from seeds and cuttings. Air-layering is also possible. The seeds have a hard shell and should be stratified or scarified before they are planted. It can take two years until they germinate.

The ginkgo is very resistant and is hardly ever attacked by insects or fungal diseases. For more detailed information on these techniques, check out our Bonsai tree care section. 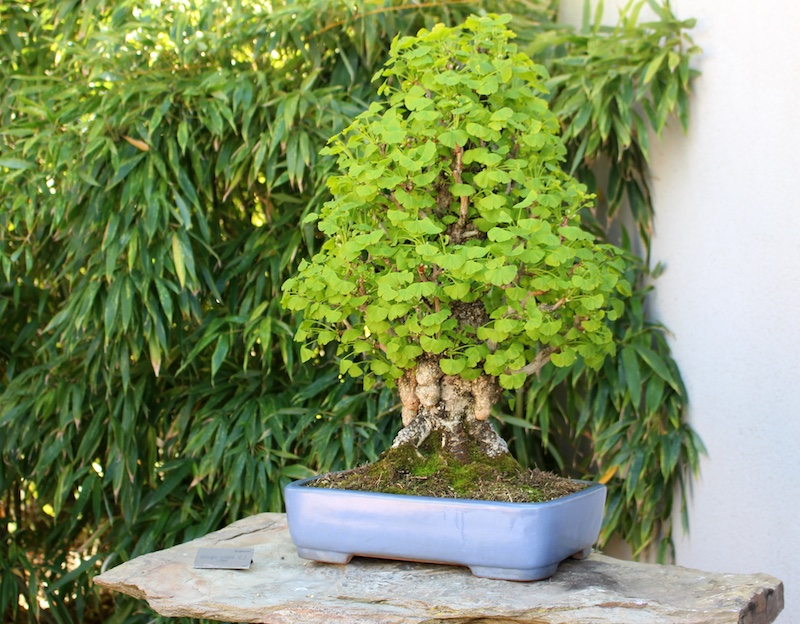 On young trees the bark is light grey and on old trees dark grey and furrowed. Some old trees produce so-called „Chichi“, hanging swellings reminding of stalactites. The largest and oldest ginkgo trees are found in China, some of them are more than 40 m (130ft) tall and approximately 4,000 years old. The ginkgo is dioecious, which means there are male and female trees. The ripe fruits of the female ginkgos have a very unpleasant smell. Ginkgo bonsai hardly ever bear fruit, so this is not of much importance. The seeds are edible and popular in East Asia. The leaves of the ginkgo turn brightly yellow in autumn, before they fall. Ginkgos are robust, can grow in diverse soils and places and tolerate pollution. For these characteristics they are often planted along busy streets in big cities. Six famous ginko trees have even survived the atomic bomb in Hiroshima in 1945, only 2 km from the the center of the explosion. Extracts from gingko seeds and leaves are used for medical purposes, against dementia, Alzheimer's disease, anxiety and depression for example. If you need help identifying your tree, take a look at our Bonsai tree identification guide.