The trident maple, which is native to China and Japan, is one of the most popular deciduous tree species for bonsai, beside the palmate maple (Acer palmatum). In nature the trident maple can grow up to 65′ (20m) tall and its characteristic leaf shape with three pointed lobes explains its popular name.

The trident maple likes a sunny airy place, but during the hottest summer weeks better protect it from scorching sunlight in the afternoon. In winter don't expose it to temperatures below 23° F (-5° C). It is a good idea to place the trident maple bonsai in a frost-free greenhouse or cold room for winter protection.

Trident maples grow vigorously and consume a lot of water during the growing season. Always water in time, but do not overwater. Don't use very calcareous water, rain water is preferable if it can be obtained. Continue reading about watering Bonsai trees.

During the growing season fertilize the tree once a month with solid organic fertilizer or every week with a liquid product.

The new shoots in spring are usually allowed to grow until they have developed several leaf pairs and then they are shortened leaving just one pair. The apex tends to grow stronger than the lower branches, so balance the tree's growth by pruning the top more and letting weaker branches catch up. New shoots appear during the entire growing season and must be shortened continuously. On mature bonsai, pinching the young shoots very early can be necessary, to prevent the finer twigs of the outer canopy from thickening. Pruning of large branches or trunks should be done in summer when the cut wounds begin to heal immediately. Vigorous trident maples can close even larger wounds within a few years. Always seal wounds with cut paste to avoid fungi entering and to prevent die-back of the bark.

Healthy compact trees can be defoliated partly or totally in summer, in regions with long warm growth periods even several times a year, to promote delicate ramification and smaller leaves and prevent inner twigs from dying from lack of light. On trees which are not defoliated still the largest leaves can be removed at any time. Autumn, when the leaves fall, is a good time to shorten the twigs and remove those which have grown in odd directions and all but two growing from the same point. The winter buds of trident maple bonsai are tiny and sometimes you might need a magnifying glass to see in which direction they point to decide where to cut, in order to make the new shoots grow into the desired direction in the following year. Continue reading about pruning Bonsai trees.

Younger branches and twigs can be wired and shaped quite well during winter dormancy, but check and remove the wire in time. Because of the strong growth wire can scar the bark very soon after the spring shoots have emerged. Guy wires are a good option to position stiff older branches.

The trident maple should be repotted every two or three years in early spring, large old specimen less often. The roots grow strongly and can be pruned heavily. Use a well-draining soil mix with a pH value between 5 and 7. Continue reading about repotting Bonsai trees.

Trident maples can be grown from seeds, cuttings or air-layers which root easily.

Vigorous trident maples are hardly attacked by pests and diseases. Aphids, scale, caterpillars or spider mites can sometimes occur and powdery mildew or leaf spot fungi. Use a specific pesticide in these cases. Take care to seal cut wounds immediately to prevent Verticillium and other harmful fungi from entering. Root rot can occur when the tree is overwatered. Frequent watering with calcareous water can cause chlorosis. For more detailed information on these techniques, check out our Bonsai tree care section. 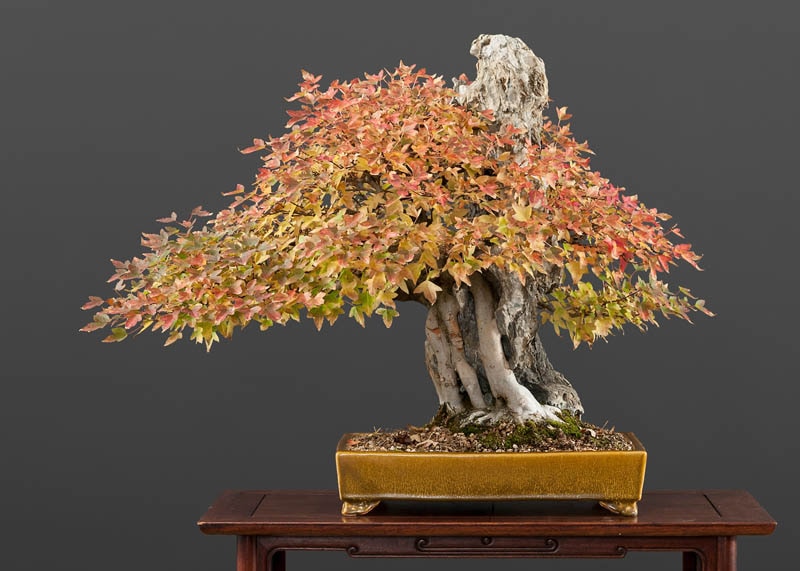 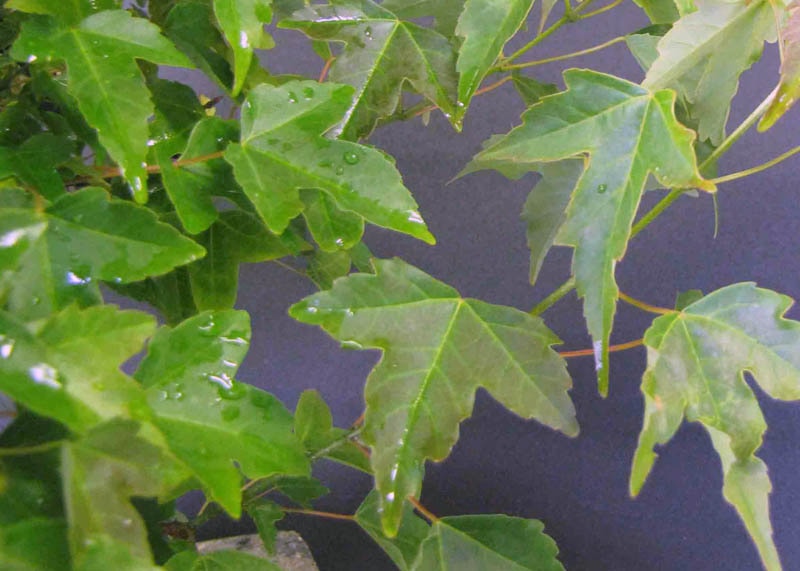 Leaves of the Trident maple 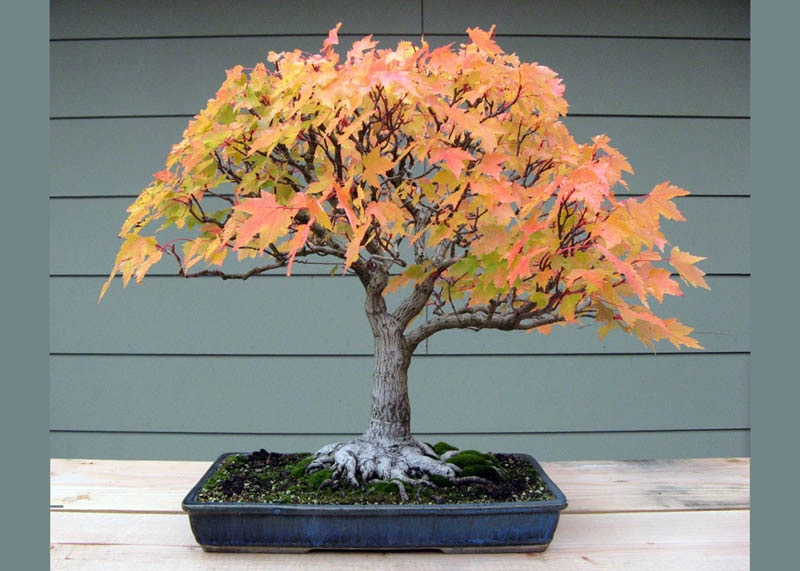 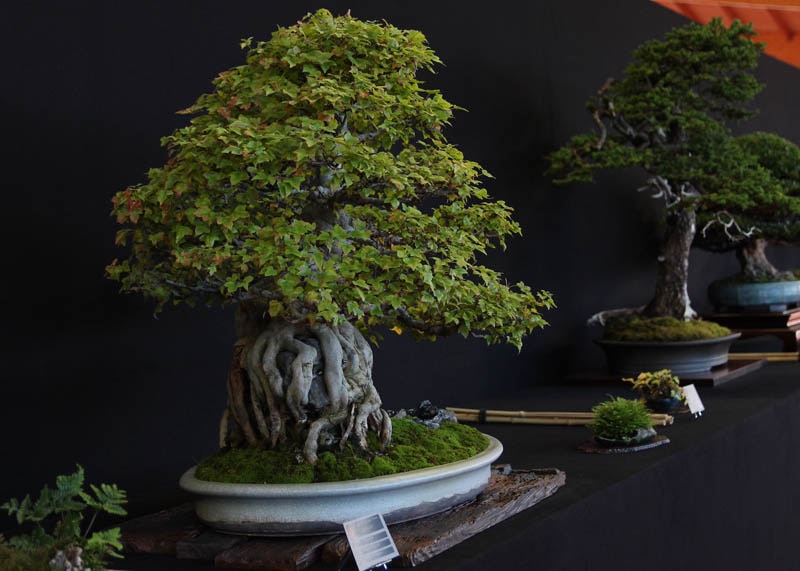 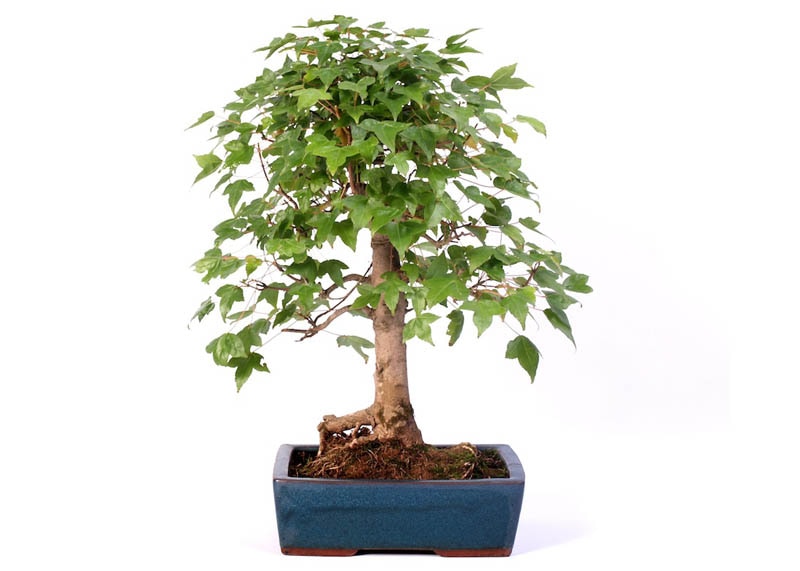 In spring the leaves, which grow in an opposite pattern, unfold with a pretty orange tinge before they turn green over the summer and develop bright fiery autumn colors from yellow to orange and red. The bark is smooth and grey on younger trees and flakes off on older trees, leaving cinnamon colored patches.

The trident maple has great characteristics for bonsai purposes, as it is very vigorous and can build a fat trunk and wide nebari quite quickly, but it can also develop a delicate and dense ramification and tiny leaves. It responds well to bonsai techniques and is a good choice also for beginners. The only sensitivity of the trident maple is its limited frost-hardiness. There are half a dozen varieties of the trident maple which have slightly differing leaves. If you need help identifying your tree, take a look at our Bonsai tree identification guide.