About Craig Coussins' relations with the Giant Sequoia: The Giant Sequoia. When I was ill with Cancer back in 2000 I made the pilgrimage to Sequoia National Park in California. My wife asked me what I wanted to do before I died.

(Well in case I died) I wanted to see the Giant Sequoias and do the worlds highest Bungee. When we finally got there I managed to walk up the steep hill from the lower car park. It was winter and the shuttle bus was not running. It really was very difficult for me and having been through months of Chemo., I was not at all as fit as I would have liked to be for this journey. I went up to see these great trees and they inspired me enormously. That grove holds a special place in my heart. I am sure that being with these wonderful trees helped me in many positive ways.

Soil: Shallow roots so a shallow pot. They do not like deep soil. I use a mix of Akadama 40%, Kiryu 45% and some peat.15%-They are not difficult in soil but need a free draining soil like a juniper

Fertilizing: I fertilize with Bio Gold pellets. A handful on every quarter of the soil every three months

Pruning: Root prune as normal like Junipers. Foliage prune by plucking hard once a year-What time of year? I am still trying to work that out.So far here is what I do right now: Its best to pluck once at the beginning of summer when the new shoots start to grow and then tidy up what you missed in early September Under prune all branches to make a clean line and do not make Pom Poms (they look ugly)

Wiring: June. Watch for growth and remove when wire starts to cut in.

Watering: As normal but spray foliage once or twice a day in the morning and evening to emulate the conditions found in the Giant Sequoia Forest in California that are 1.7 to 2 thousand meters above sea level and so get a lot of cloud moisture in nature morning and evening.

Placement: They like full sun but can take slight shade in winter. Mine do not get much sun in Winter but are kept in a light place which essentially gets no direct sun from October until April.

Branches: Keep these short as in the wild. Read more about Redwoods (Metasequoia / Sequoia bonsai). 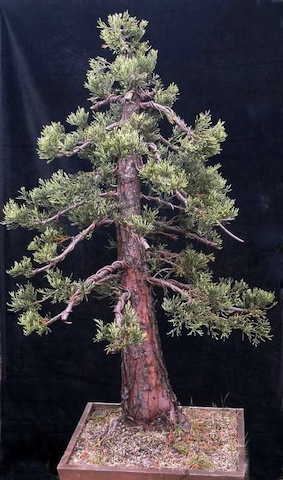 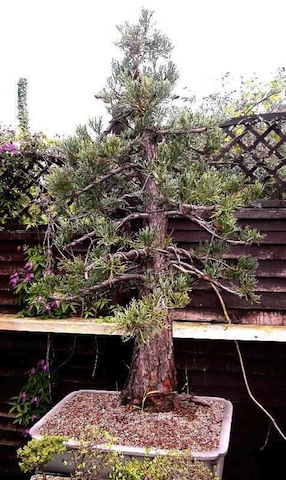 I cant seem to locate the picture of the tree when I first received this but this is the first Bonsai styling I did in 2005. I repotted a year later.

Picture 1 (left): June 2005 Height is 6 feet. All the existing branches were left on but the tree was leggy. I needed to pinch once a year for two years to get to the next stage. Heavy feeding with Biogold pellets twice a year (lots).

Picture 2 (right): The trees first repot in July 2006. This required branch removal and the crown to be pulled over to for a new apex. The tree was also planted into a longer shallow pot as these are shallow rooted trees and now that I had developed the root system I could spread that out and remove the larger roots under the tree (sealed with Kiyonal after cutting). 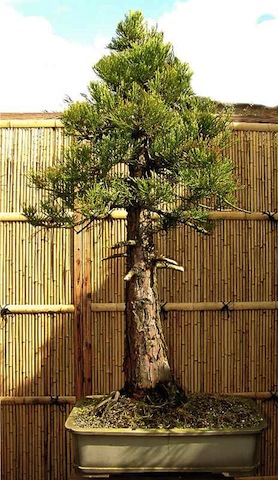 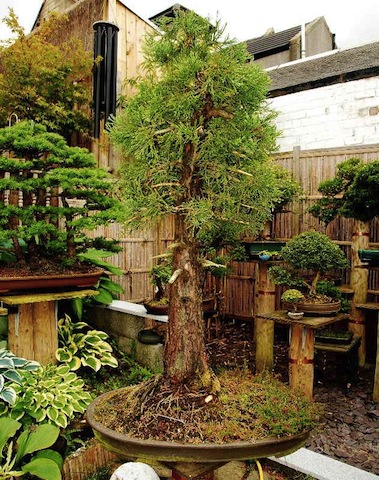 Picture 3 (left): This was the second styling in 2007. Lower branches were removed to increase the Sequoia outline. These were Jinned but may be removed later. The original apex had been hard chopped so the new apex styled in 2005 was created from a lower branch. Its now developing well and the shape is starting t look like my favorite tree in Nature.

Picture 4 (right): July 2009 I have just pruned the branches back, rewired the structure and cleaned out unnecessary growth. I need to wait until the new growth starts to sprout within a few weeks and then pinch back hard. 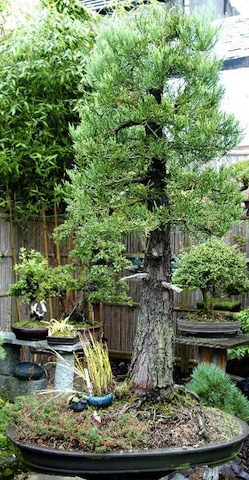 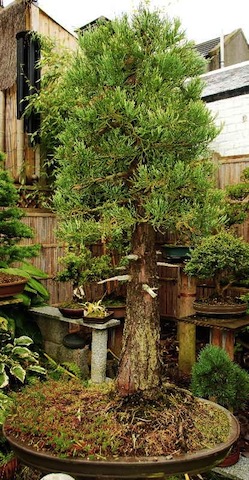 Picture 5 (left): Here you see the tree six weeks later. Half the tree down one side has been plucked and the other shows vigorous growth. After plucking both sides September 2009 When you pluck this species only pull gently upwards. It is stiff so you can take a small bunch and pluck up but do not tear as that will damage the back shoots. These create the bulk of the growth the following year. Meantime it looks pretty nice right now.

Picture 6 (right): Plucking a maximum of three weeks after pruning and wiring. Its best to pluck once at the beginning of summer when the new shoots start to grow and then tidy up what you missed in early September in Northern climates. As you can see that within a month the foliage has started to fill in very quickly. It will be shaped in summer 2010 and that should get it pretty much to its final shape-well you all know that maintaining that shape is indeed an ongoing effort

On a dry day spray the bark with a bark cleaner such as the one from Kaizan Bonsai. Pointless in wet as the rain washes this off. You can also use Mortegg Winter Wash solution (Tar Oil base) on this fissured bark. This kills overwintering pests and should be applied before mid February or early Spring in Southern countries... Pest are few but wasps and yellow Jackets like to munch on the bark as that is perfect for the building of their nests/hives.

"Craig Coussins started Bonsai in 1974 and spent the next 20 years studying under the UK's leading Bonsai artist. During this time he travelled to the home of the late John Yoshio Naka in Los Angeles to learn from this Bonsai Master who not only was a great teacher but always gave generously of his time to Craig. John also visited Craig in Scotland. He began teaching in June 1978 when he founded the Scottish Bonsai Association and soon after in 1983 he was a founder committee member of the UK Federation of Bonsai Societies, FOBBS. He was awarded the Patrick Neal Medal for services to Scottish Horticulture" - Read our "Bonsai tree DIY kit" article to learn how to do it!