Every day we have objectives to catch up trying to arrive to the goal in the best possible way searching for old and new experiences that could teach and guide us without errors on this route.

This is a short story where technique, cultivation and passion render this Quercus ilex a Bonsai ready for a maturation path made of goals to reach with time, without haste and with great respect.

This story began still before with the friend Patrizio Fermani who, starting from a simple tree collected in nature, brought it with years of cultivation and workings to a very promising level in order to render this tree a valuable Bonsai in the future. In the 2004 this tree entered in my collection thus, continuing an already well started job, I dedicate myself particularly to its maturity and its structuring. A job that never ends, but that in last the 4 years it has given its yield carrying this Quercus ilex to a new advanced level of cultivation and of the applied techniques. 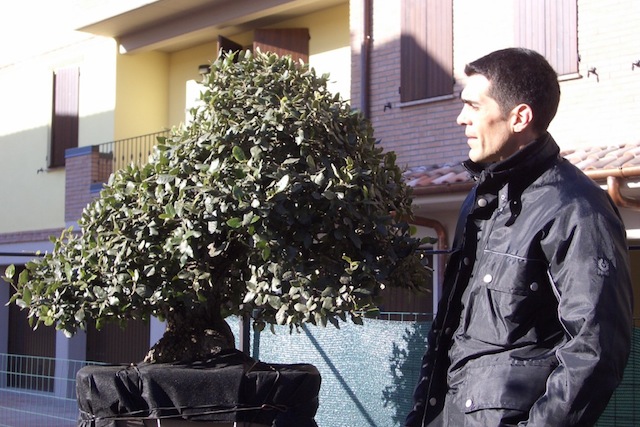 During all 2005 I needed the plant to get stronger in order to restructure the secondary and tertiary branches with the wiring and with an aggressive enough formation pruning, from which being able to restart correctly. A good “unbalanced” manuring and an aimed Bonsai pruning, in order to maintain the form and make the vegetation withdraw, have helped me in this attempt. The “unbalanced” manuring is only a manuring that is based on the periods and the requirements of the plant, therefore giving in spring a greater contribution of nitrogen (n) and less phosphorus (p) and potassium (k). In the phase of maturation of the new vegetation, before summer, we will need more phosphorus and potassium in order to help the phase of lignifying.

The cycle is repeated after the warmer period of the summer when the plant resumes to move giving more nitrogen for the resumption and concluding with an autumnal manuring with more phosphorus and potassium thus preparing the plant to a fast lignifying, for the winter period and for a good resumption in the successive spring. All this does not have fixed periods on the calendar that can quite vary from various climates of nations or regions, it is important to learn to observe the tree, trying to understand its cycles and its needs. 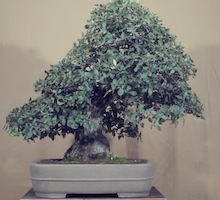 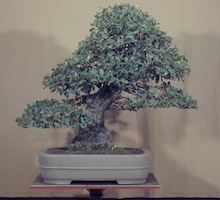 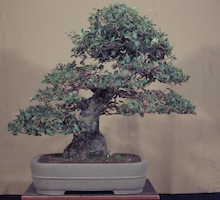 In February 2006 the plant entered in my laboratory for the phase of restructure of the ramification. The scope is that one of giving with the wiring a course and a correct disposition of secondary branches in order thus to be able to construct the successive ramification only with the pruning, which is most ideal in order to render a broad-leaved tree very more natural. 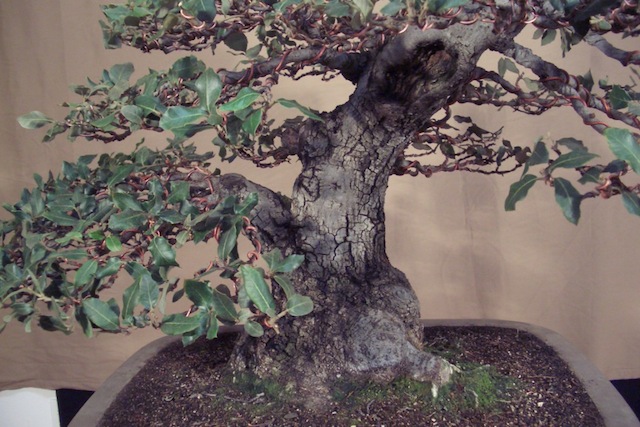 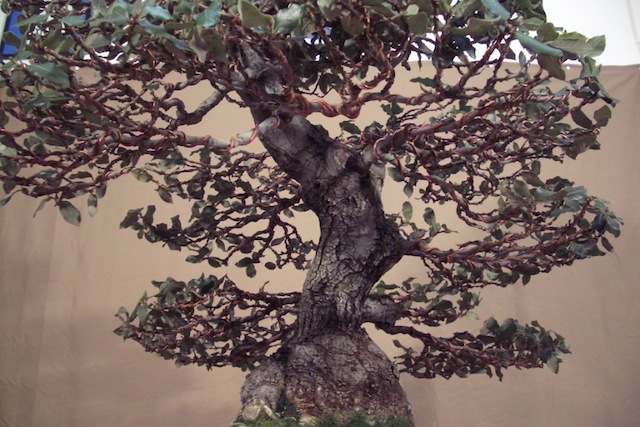 In this wiring phase, besides arranging the branches, it is useful also “an aggressive” pruning of the apex part of the offshoots leaving only a pair of leaves. It will allow me to have a more rear new vegetation, which I can work and select in the future. Cutting also all the double branches, branches that grow downward, crossing branches, all this will permit first to have more light inside the foliage for the new gems' growth, and in a second time a good ramification's rhythm rendering it clear, fluid and beautiful to see. 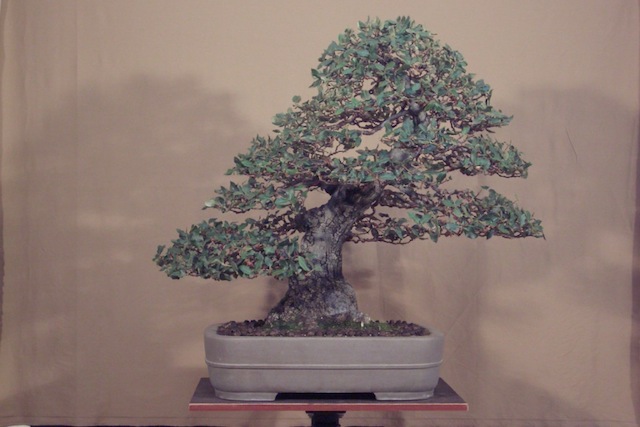 Completed the wiring I observe the new design given to the plant, a design that will be controlled in the next years only with pruning. The wire will be removed gradually in the time, letting it bite enough all the branches so that the mark disappears shortly and at the same time it succeeds to maintain the position given. In this way, paying attention and controlling periodically which wire remove will allow me to apply not more wire around the branches, but, in extreme cases, only using draughts in order to maintain them in a good position eliminating them with the time. 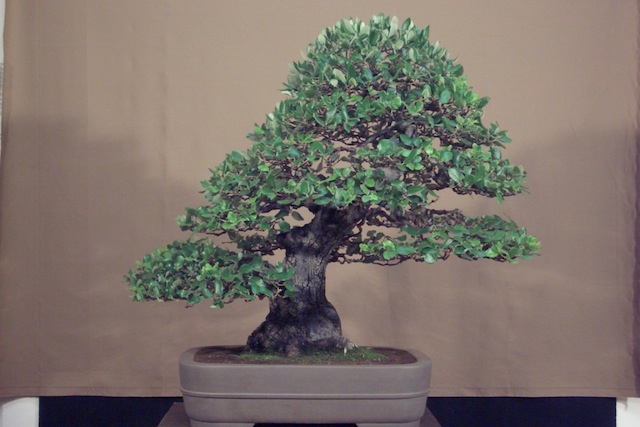 In the springtime I stimulate the plant to a good resumption after the working, accomplice also the adapted cultivation-preparation of the year before that now bears fruits making the plant quickly pass undamaged and forcefully the stress undergone. In this period the plant, considering its vigor, it took part to the “Decennial UBI 2006” exhibition, where it has been awarded the “Important Italian Bonsai”. Then, I protract the renovation process until the end of the 2006 and 2007. Then little by little I eliminate all the wirings, the prunings are periodically carried out in order to create a good terminal ramification. In this phase the prunings are executed in a way to create smaller leaves and shorter internodes.

The criterion that I apply is that of pruning when the new bud is in the lignifying phase of and not when it is still fresh, leaving only a couple of leaves. In this way the remaining leaves do not thicken, stimulating, in order to compensate the foliage volume, also other rear sleeping gems. You can notice how an already mature new offshoot starts with leaves and internodes more little, then it grows longer and bigger leaves towards the apex of the shoot. If we had carried out this pruning before, when the bud is still fresh, it would have a lengthening of the internode and a thickening of the remaining leaves because the bud is still increasing and it will have to compensate the volume which we have cut.

Also the manuring should be slightly changed in order to maintain in force the plant controlling its vigor, therefore the plant will have to make the first spring growth with the forces accumulated in the year before and with the escorts stored in the last autumnal manuring. 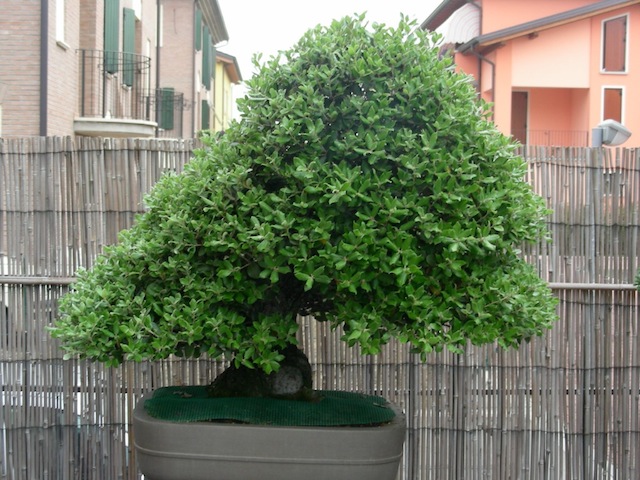 In the spring 2008 the plant repays the technique and the cultivation applied in this period. Now I can practice a total defoliation, which is not recommended for an evergreen if it is not at the maximum of its vigor, and it is not recommended to apply it repeatedly in the years.
The scope is the balancing of the foliage in its vigor from the low branches to the apex ones. Once undressed from the foliage, we can correct the new vegetation, created in these years, with the pruning. 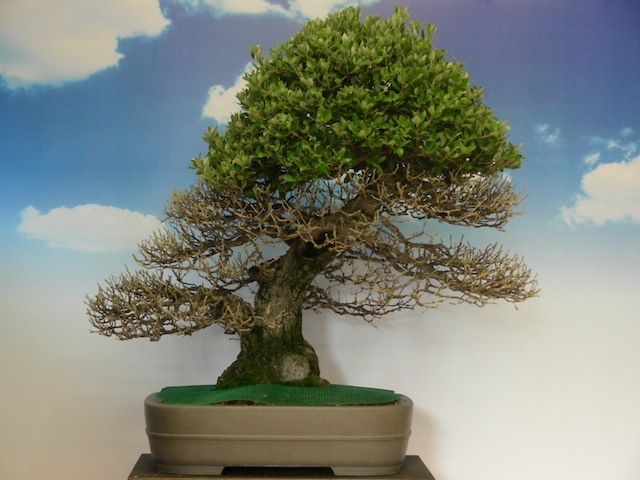 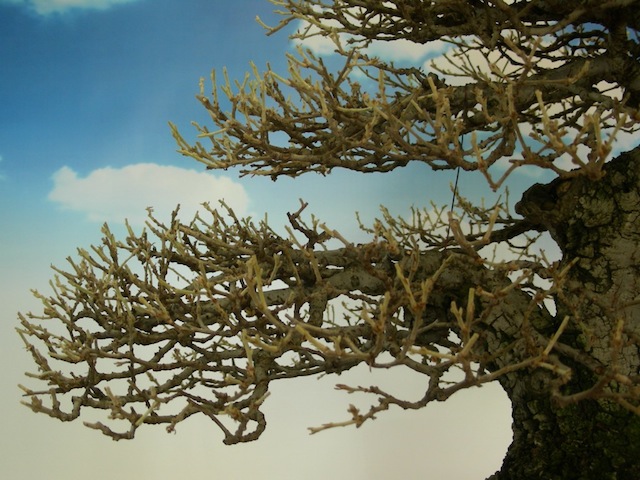 When the new vegetation is ripe, I proceed defoliating the 2/3 of the plant leaving only the apical part integral. In the meantime I shorten the new vegetation and I arrange with the pruning the final ramification of this leaves-less part. With this essence it is difficult to eliminate the leaves pulling them away and it can turns out harmful risking to lose the sleeping gems at the beginning of the leaf, therefore we must act cutting each leaf at half petiole. In this phase, before the plant makes new leaves, one must make much attention on the irrigation, the plant is slowing down its rhythms and processes, thus having a less radical absorption. Too much water and an always humid compost, could provoke risks of root rots that could compromise the plant. 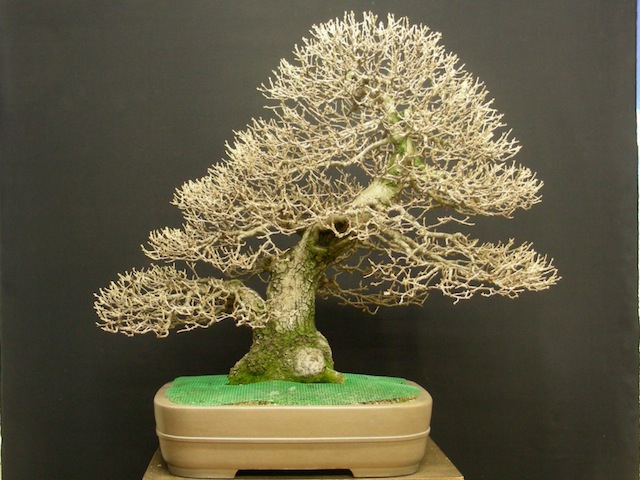 Passed approximately 15-20 days I proceeded to the defoliation of the apical part thus having the possibility to see a bare evergreen and enjoy thus this new created ramification. 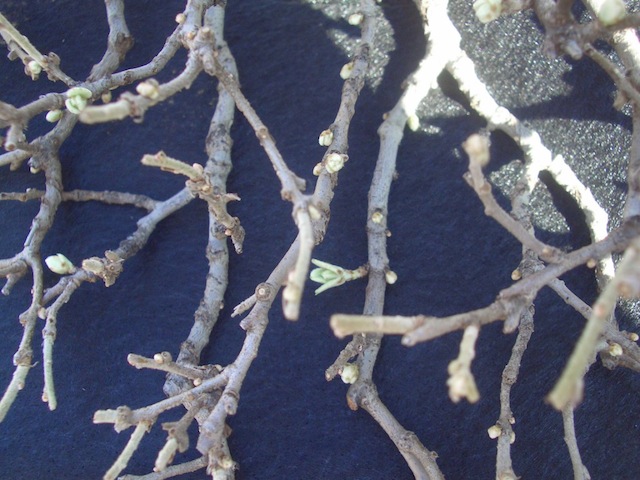 The gems are not late to open themselves, and then the new leaves appear first in the lower part of the plant where we first had eliminated the leaves having thus more vigor compared to the apex. In this phase the new superfluous shoots are eliminated, that are those which grow in wrong way, or those not useful to create a good ramification. 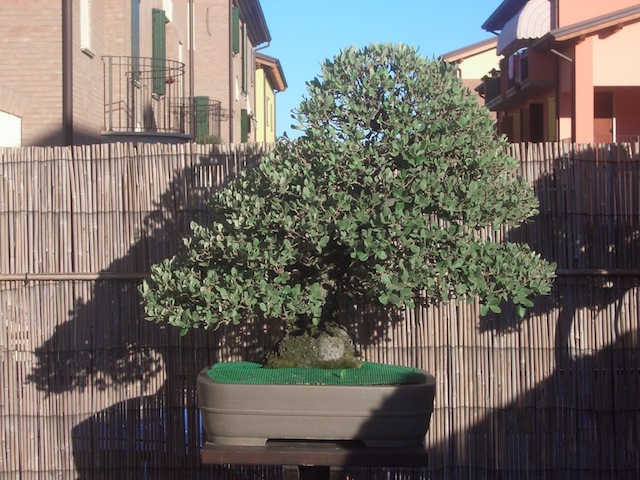 After a month from the total defoliation the plant shows the new foliage. Now one will wait that the plant resumes itself from this umpteenth hard work leaving it growing calmly, only taking part at the end of the season with a light pruning of maintenance. 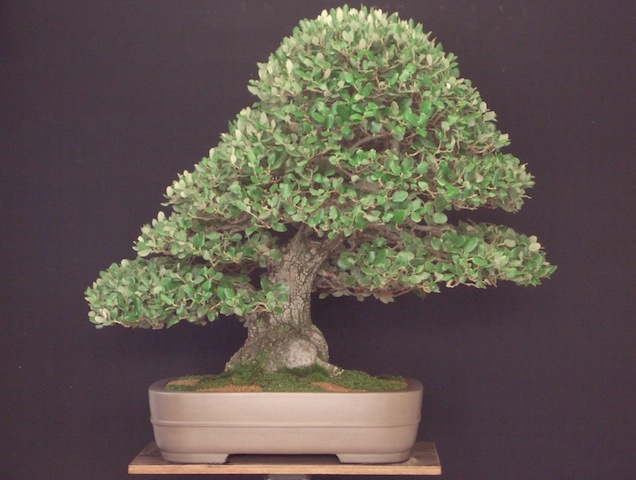 A job of restructure that lasted 4 years and is not still ended, which allows us to understand and to judge our method of applied techniques and cultivation, always trying the best for every need of the plant in every occasion and situation. This is part of our own experiences of years that allow us to correct our own mistakes and to try new methods. Long it is still the road for this Bonsai's maturity, the next steps will be at the radical level and still at the level of ramification creating empty spaces in a context still too full in my opinion. But this will be another history still all to live and to write. Enjoy your Bonsai!