The yew is an evergreen dioecious shrub or tree with dark green needle-shaped foliage. The genus Taxus occurs in the temperate zones of the northern hemisphere. Although the yew is considered to be a conifer, it does not bear woody cones but produces seed cones with a single seed surrounded by a berry-like red aril which is open at the end.

The yew prefers a place with sufficient light, but can also tolerate shade, although it will grow less dense in deep shade. In hot dry climates protect the yew from strong afternoon sun in summer. In winter the yew should be sheltered from hard frost combined with strong sunlight and icy winds. The soft roots as well as the foliage can suffer badly from such harsh winter conditions. As the yew is evergreen it needs sufficient light also in winter.

Water the yew tree as soon as the soil gets dry, but don't keep the roots wet all the time. Spraying the foliage with lime-free water is also a good idea. The yew tolerates a pH value between 5 and 8. Continue reading about watering Bonsai trees.

Yew trees can be pruned back into the old wood and will bud easily. New shoots are trimmed and old needles can be plucked in summer in order to let sufficient sunlight reach the inner parts of the tree and promote back budding and ramification. Deadwood is an important feature of mature yew bonsai. Make sure to identify the important live veins before removing bark for new shari parts. Continue reading about pruning Bonsai trees.

The old branches of the yew are quite stiff and hard to bend, but younger twigs are flexible and can be shaped easily. Wiring can be done at any time of the year. All of this refers to strong and healthy trees, of course. Weak trees must regain vigor first.

Repot the yew every two to four years, very old specimens can wait even longer. The roots can be pruned considerably. Use a standard soil mix, but in hot climates add a bit more humus for water retention. Continue reading about repotting Bonsai trees.

The yew tree can be propagated from seeds, cuttings and by air-layering. Cuttings are taken in summer and the best way is to tear little twigs off the mother plant's branches.

Scale and mealy bugs can sometimes bother the yew, then use a specific pesticide. Weevils can also cause serious problems, as the adult beetles eat the foliage and bark and the larvae hide in the rootball and eat the roots. Root rot can occur when the tree is overwatered. For more detailed information on these techniques, check out our Bonsai tree care section. 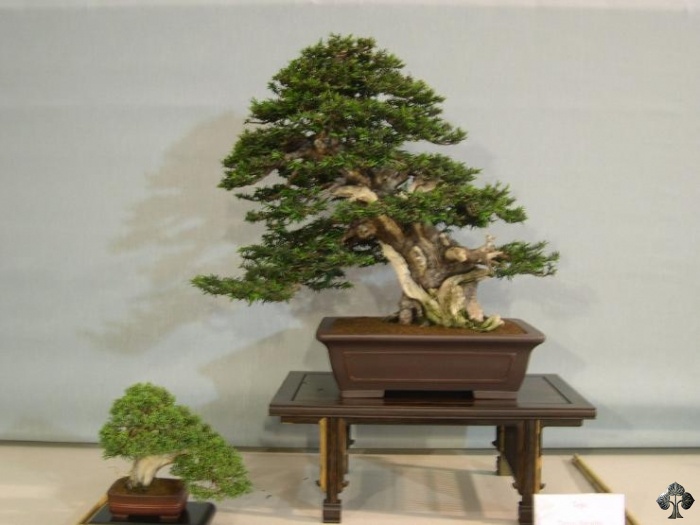 All parts of yew trees are poisonous except the soft red aril. Old yew trunks develop characteristically protruding veins. The bark is thin and reddish brown with greyish flakes coming off along the trunk. When yews are heavily pruned, they can even bud from parts where no foliage was left, which is a very helpful feature for bonsai styling. The two most frequently used species for bonsai are the European yew (Taxus baccata) and the Japanese yew (Taxus cuspidata). The Pacific yew (Taxus brevifolia) and the smaller Canadian yew (Taxus canadensis) are also well suited for bonsai. Yews grow quite slowly, produce very hard wood, which is good for deadwood sculpting, and can become several hundred or even a thousand years old. Yews were very important in old religious rites of many nations and are still often found in church yards. In the Middle Ages yew wood was excessively used for longbows which were important weapons of war in those times. If you need help identifying your tree, take a look at our Bonsai tree identification guide.